A multilayered shakeup at the casino resort company could change the power dynamics in gaming.

There have been rumblings all week that Steve Wynn could sell his entire stake in Wynn Resorts (WYNN 1.32%), which would free  he and the company to go their separate ways. But I don't think there were many who thought it would all happen so quickly.

Less than two months after The Wall Street Journal broke the story of alleged sexual misconduct against Steve Wynn, he's quit his jobs as CEO and chairman of the board of directors and sold all 12.1 million shares he held in the company he founded. The shocker is that a competitor appears to be filling the void Steve Wynn is leaving behind, and may be edging its way toward an eventual buyout of the company. 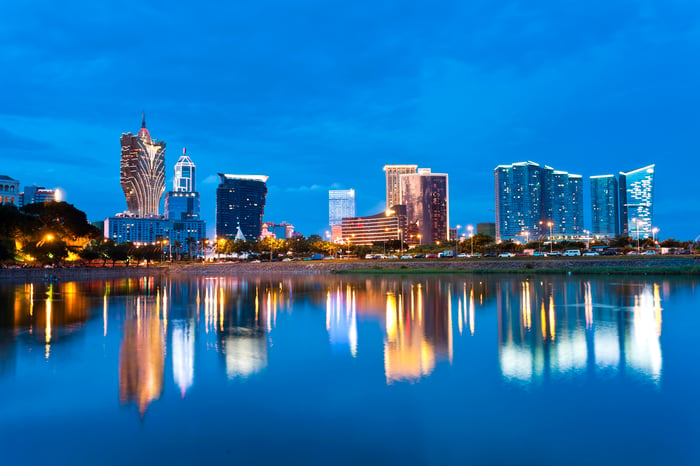 Earlier in the week, Steve Wynn sold 4.1 million shares of stock on the open market, making good on his previously announced plans to reduce his stake. But after the market closed on Thursday, it was revealed that he'd agreed to sell his remaining 8 million shares in a private transaction.

As of Friday morning, Steve Wynn had essentially no role nor stake in Wynn Resorts.

In a separate transaction from Steve Wynn's sales, Wynn Resorts agreed to sell 5.3 million shares to Galaxy Entertainment Group, a large entertainment and gaming company that -- like Wynn Resorts -- owns one of the six gaming concessions in the Chinese territory of  Macau.

Galaxy will pay about $927.5 million for the stake in Wynn Resorts, allowing the company to pay off $800 million in debt it took out to pay off the settlement it made with co-founder Kazuo Okada earlier this month.

If your head is spinning from all of these transactions, I don't blame you. But the takeaway is that Steve Wynn is out, while competitor Galaxy Entertainment is buying about a 5% stake in the company, effectively inaugurating a massive new gaming partnership that spans the globe from Boston to Asia. It's an interesting move, and interesting timing on Galaxy's part.

Steve Wynn's haste to get out the door may appear surprising, but it would make sense if Wynn Resorts was under pressure from regulators to cut ties with him. We know that regulators in Massachusetts and Las Vegas were taking the allegations of sexual misconduct seriously, and even a small chance of losing a gaming license in either location may have been enough incentive for Steve Wynn to leave.

The Galaxy sale is also surprising, but could have been a pre-emptive move that reduces the risk of another gaming company trying to step in and acquire it. I've said previously that there are a variety of reasons why Caesars Entertainment would be the natural buyer of Wynn Resorts, but Galaxy may be using its stronger financial position to move from Asia's gaming hub of Macau, gaining exposure to gaming in Las Vegas and Massachusetts. Maybe we can expect Galaxy to make a play for a full buyout, something that may be easier given the fact that both companies have gaming licenses in Macau.

Is all of this good or bad for Wynn Resorts?

The fact that Steve Wynn is out entirely may be unnerving to long-term Wynn Resorts shareholders, but he had likely become more of a liability than anything for the company. I think his exit could reduce its regulatory risk slightly, although regulators may demand more changes to ensure similar problems don't recur at the company.

The Galaxy deal is intriguing from the standpoint that it takes the specter of a buyout from pure speculation to a real possibility. If it continues to stalk Wynn Resorts, we could see the next big gaming merger take place. And having Steve Wynn out of the way makes such a sale more likely than ever before.