Please ensure Javascript is enabled for purposes of website accessibility
Log In Help Join The Motley Fool
Free Article Join Over 1 Million Premium Members And Get More In-Depth Stock Guidance and Research
By Jeremy Bowman – Mar 26, 2018 at 11:30AM

Nike reported another decline in operating profits in its recent earnings report, but here's why management sees better things on the way.

Nike (NKE -1.04%) stock rose modestly last week even as the sportswear giant released another round of middling results in its third-quarter earnings report. Revenue increased just 3% on a constant-currency basis to $9 billion, though that beat estimates of $8.85 billion; it continued to decline in North America, falling 6% in the key region.

Expenses, including costs of goods sold and selling, general, and administrative, outpaced revenue growth, and as a result net income before taxes fell 12% to $1.16 billion. Adjusted for the new tax law, the company posted earnings per share of $0.68, the same as a year ago and ahead of estimates for $0.53. The Swoosh once again appeared to benefit from low expectations, as the stock rose as much as 4.3%, but the company also announced several pieces of news that seemed to restore investors' faith in its future. Let's take a closer look. 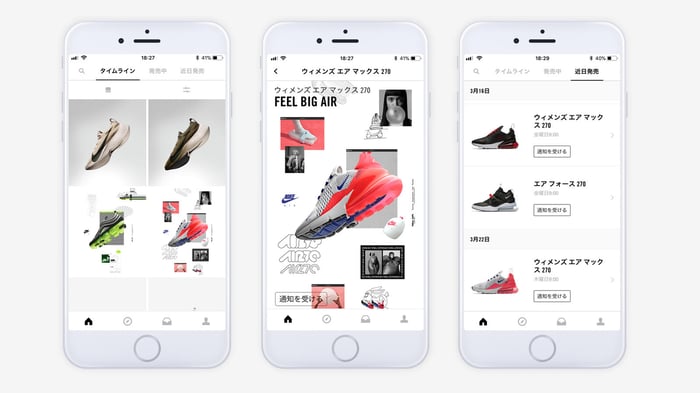 1. North American growth is coming back

Nike's home region has been a notable eyesore for the company for several quarters. Like Under Armour (UA -1.94%) (UAA -2.21%), which is also ceding market share to Adidas, Nike is struggling to adapt to the changing nature of American retail; the rise of e-commerce has disrupted traditional selling channels, and pressured its mall-based partners like Foot Locker and Dick's Sporting Goods. However, Nike sees a return to growth in North America coming in the current quarter, as it laps easier comparisons and its recent strategic initiatives begin to take hold.

On the recent earnings call, CFO Andy Campion said revenue in North America was projected to be flat in the fiscal fourth quarter (the current period), and return to growth in the first half of fiscal 2019. Campion said, "Nike has returned to a pull market in North America," meaning sales are being driven by consumer demand rather than aggressive marketing. He added:

We have reset Nike's supply. We're fueling demand through the launch of innovative products. We have reignited brand heat. We are connecting more directly with consumers through our digital ecosystem, and orders from our strategic partners are building.

The company also made the strategic move to tighten supply of the Jordan brand, which had lost some of its halo effect due to a lack of scarcity. Campion elaborated: "As we enter Q4, we believe Jordan inventories are now clean, and we also began reigniting Jordan brand heat in the marketplace through the launches and activations over the NBA All-Star Weekend. Looking ahead, we are well-positioned to continue adding dimension to the Jordan brand, through both performance and lifestyle product."

Hidden beneath the headline numbers in the earnings report was an interesting acquisition by the sportswear giant: Nike said it would acquire Zodiac Inc., a consumer data analytics firm. Nike is looking for new ways to leverage its relationships with consumers, and the data it gathers from those shopping on its own properties like the SNKRS app. Chief digital officer Adam Sussman said the deal would add "best-in-class tools to power 1:1 relationships with consumers through digital and physical consumer experiences."

CEO Mark Parker also said Zodiac's team would focus on building and enhancing relationships with NikePlus members. He described Zodiac as a "small tech company ... comprised of world-class scientists and engineers," and said its work will help Nike better optimize consumer value and understand consumer growth and potential. Nike had already been working with Zodiac and using its proprietary algorithms and models. The price of the acquisition was not disclosed.

3. "The Consumer Direct Offense is working"

The strategy promises to "deeply serve" customers in 12 major cities in 10 countries; these include New York, London, and Shanghai. It is intended to help create a brand halo, and showcase unique products. Nike also said it would double speed, innovation, and direct connections with consumers.

On the earnings call, Parker said "the Consumer Direct Offense is working." He added that the company is building momentum by "getting the right product in front of the consumer in the right moment." In particular, Parker noted platforms like VaporMax and Nike React that are resonating with customers.

The consumer-direct strategy also led to 18% growth in Nike's digital business. And the company just launched the SNKRS app in China and Japan, generating millions of downloads.

With the Consumer Direct Offense strategy gaining momentum, and Nike turning the corner in North America, fiscal 2019 should mark a return to solid profit growth for the world's No. 1 sports company.