Here's what investors will be looking for.

BlackBerry ( BB 4.50% ) is not a forgotten smartphone giant anymore. The company has made a successful jump into the cybersecurity software and services business under the stewardship of CEO John Chen. It is now tapping high-potential markets such as automotive and healthcare while reducing its legacy smartphone hardware business at the same time.

The stock's 90% rally over the past year clearly indicates that investors like the company's transition. The company reports fiscal fourth-quarter results on March 28. Here's what to expect. 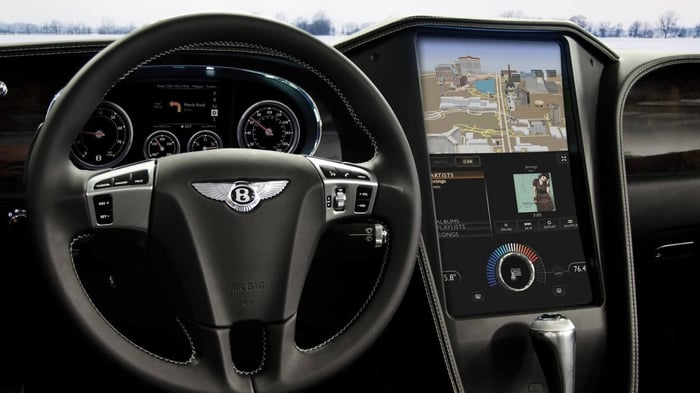 Wall Street analysts are predicting a massive 27% year-over-year drop in BlackBerry's top line. They expect breakeven earnings per share, compared to a profit of $0.04 per share in the year-ago period. Given this, you might be wondering why BlackBerry stock has been bid up so much. A closer look at the company's recent quarterly results makes it evident that investors are betting on BlackBerry's long-term potential in the software services space.

For example, BlackBerry's enterprise software and services and licensing businesses grew close to 26% year over year during the third quarter in GAAP numbers. These two segments now account for 65% of the company's total revenue, but their strong performance has been overshadowed by the company's legacy businesses: handheld devices and service access fees.

The combined revenue of these two segments fell 72% year over year during the third quarter, which isn't surprising, as BlackBerry has ceased smartphone production. As a result, the revenue it used to generate from the provision of monthly access services to users of the BlackBerry smartphone platform has dropped, leading to an overall decline in its top line.

Wall Street will be closely scrutinizing the company's overal software and services segment in the report this week, as it forms the basis of its turnaround.

What investors are looking at

One way Blackberry is broadening its market and bolstering its non-device revenue is by attacking the automotive opportunity by striking partnerships with key automotive component suppliers and technology specialists.

Qualcomm has decided to use BlackBerry's QNX software to power its chipsets, which will be used for vehicle infotainment systems. The software specialist also counts large automotive component suppliers such as Denso, Bosch, and Magna as clients. What's more, BlackBerry has already collaborated with Denso and Intel on an integrated platform to power the various systems inside a vehicle's cockpit, and this system is expected to go on sale next year.

Given that the market for vehicle cockpit systems is expected to grow from $34 billion in 2016 to $66 billion in 2024, it won't be surprising if BlackBerry sees a jump in automotive-related software sales. Meanwhile, the company is making aggressive moves in the enterprise space with the BlackBerry Secure platform, an end-to-end enterprise software platform that allows big corporations such as banks, law firms, hospitals, and governments to deploy security features across several devices and applications. What's more, BlackBerry recently struck an important partnership in this space with Microsoft.

The two companies have teamed up to offer an integrated solution to their enterprise clients, combining BlackBerry's security platforms with Microsoft's cloud and productivity products. This partnership will allow their common customers to launch Microsoft's mobile applications using the secure BlackBerry Dynamics platform. 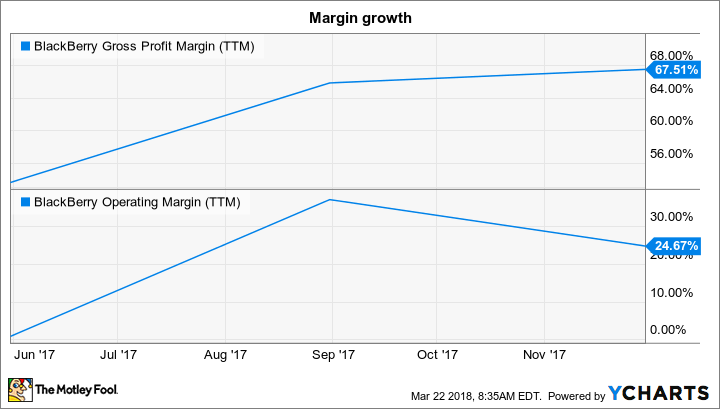 Seventy-five percent of BlackBerry's software and services revenue, excluding IP licensing and professional services, is recurring revenue. This proportion can go up as the company adds more features to its existing platforms and strikes more partnerships, which will eventually improve the margin profile. Investors will be watching to see if BlackBerry reports another quarter of improving software and services revenue, as well as strong margins.

Why BlackBerry Stock Popped 12% in August

Why BlackBerry Stock Fell 16% in July