Tencent Holdings (OTC:TCEHY) reported fourth-quarter results on March 21, putting the cap on a year of solid growth. The table below outlines some key performance metrics for the December-ended quarter.

Successful initial public offerings for spinoff businesses accounted for much of the earnings jump, but Tencent's core segments are posting great results, too. A big part of the strong overall performance is attributable to the company's online games business, which grew 32% compared to the prior-year period and accounted for roughly 37% of overall sales.

That's impressive growth, and there are catalysts for the segment's increased momentum from there. Tencent has made some moves in the gaming space that look very smart right now. 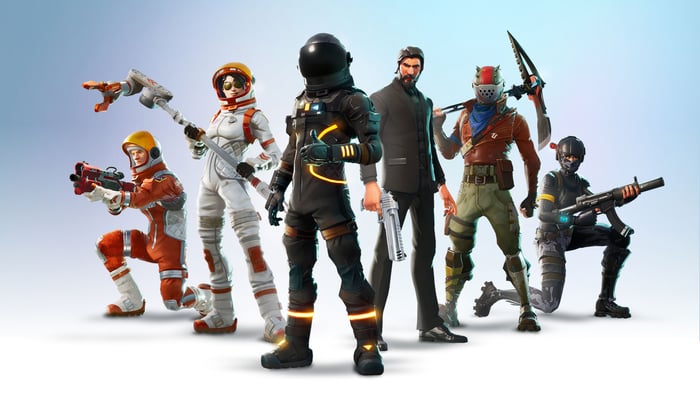 Mobile title Honor of Kings continues to draw massive audiences and was the biggest factor behind sales gains for Tencent's gaming unit in the fourth quarter. The title has more than 200 million monthly active users and stands as China's top-grossing mobile game. League of Legends also continued to perform well and saw increased revenue in the quarter -- an impressive feat given that the game was first released back in 2009.

The company's QQ Speed Mobile, an internally developed racing game for smartphones and tablets, also launched in the fourth quarter and has gone on to be a big hit. The game had 20 million daily active users at the end of the last quarter, and Tencent has indicated that the company is seeing strong monetization from the title. Games that the company publishes but did not develop, Kings of Chaos and Legacy TLBB Mobile, both put up strong performance in the quarter as well.

In addition to these hits, Tencent has a hand in some hot new games that are just starting to emerge as performance drivers. Of particular note are PlayerUnknown's Battlegrounds (PUBG) and Fortnite -- two titles that fall under the "battle royale" genre and are making waves in the gaming world.

Tencent announced in November that it had secured exclusive rights to port PlayerUnknown's Battlegrounds to mobile platforms and release the versions in China. The company launched two versions of the game in Chinese mobile app stores in February -- one that was a closer adaptation of the game already released on console and PC platforms, and another that was more specifically tailored for mobile. These titles rocketed to the top of the most-downloaded charts on the platform despite only being available in China; they have now been downloaded more than 75 million times, and are in the process of being rolled out for other markets.

Tencent acquired a 48% stake in Epic Games (creator of the hugely popular Fortnite) for just $330 million 2012 -- a move that looks prescient today. Epic is also responsible for the Unreal engine -- one of the leading as-a-service video game development suites -- so it's not as if the studio's value is limited to one property.

Tencent purchased its stake in Epic when the studio's future was somewhat uncertain. At the time, the company had already been working on Fortnite for years, and progress was lacking. The game underwent several changes in direction and ultimately had a seven-year timeline from development to release. Now that the title is out and solidifying its position as one of the biggest gaming phenomenons of the last decade, it appears that Tencent acquired its stake in Epic at a steal of a price.

Fortnite released on PC and console platforms in July 2017 and has since become one of the most popular games in the world. As of January, the title had scored more than 40 million downloads. Epic's megahit is currently the most-watched on Amazon's Twitch streaming service, followed by League of Legends in second place and PUBG in third. It's worth pointing out that Tencent doesn't have anything to do with the console and PC versions of PUBG, but, with the company publishing the mobile versions, it has a hand in three of the world's most in-demand games.

Fortnite has become the most-downloaded software at the Apple App store and currently stands as the second-highest grossing game on the platform -- trailing only Activision Blizzard's Candy Crush Saga. It's accomplished those impressive feats without being fully available to the public, with the game currently only accessible to a portion of the users who signed up for a trial run leading up to the game's full mobile debut. A version for Android is on track for release a few months from now, according to Epic.

Building on a strong foundation

Fortnite and the mobile versions of PlayerUnknown's Battlegrounds are likely to be big sales generators for Tencent for years to come. These ascendant hits will add to the company's winning streak and further strengthen its foundations in gaming, setting the company up to take advantage of industry tailwinds.

To put the growth trajectory in perspective, research firm Niko Partners estimates that annual game sales in China will rise from $26 billion in 2017 to $35 billion in 2021. With the overall gaming industry -- and China's portion of it in particular -- on track to grow at a healthy clip, Tencent's leadership position in the space and synergy between businesses put its video games segment in position to see huge sales gains over time.