Traders rush for the exits after the company announces bad clinical news.

After Protagonist Therapeutics (PTGX 3.46%) issued an update on an important phase 2b trial, shares of the clinical-stage biotech fell 54%, as of 11 a.m. EDT on Monday.

Protagonist Therapeutics announced that it's discontinuing its phase 2b Propel study. This trial was investigating the compound PTG-100 as a possible treatment for ulcerative colitis. The company decided to abandon the trial early, after a planned interim analysis showed that the drug wasn't working and that continued development would be futile. 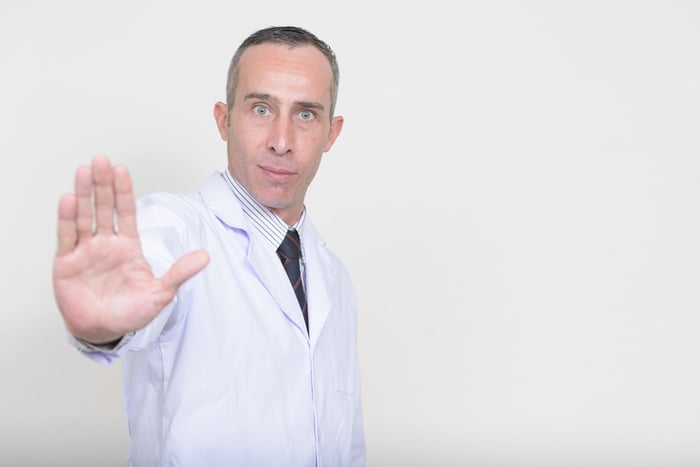 Management also announced that it is now in a holding pattern related to its decision to move forward with a phase 2/3 clinical trial studying PTG-100 as a treatment for chronic pouchitis. It will make a decision once it's had a chance to fully review the interim data from the Propel study.

We are very disappointed with this futility-based outcome which was also accompanied by an unexpectedly high placebo rate. We will conduct an extensive review of the complete dataset on the totality of patients enrolled in the trial before making any further decisions about the future development of PTG-100. We are very grateful to the patients and investigators who participated in the PROPEL trial.

While PTG-100 isn't the company's only compound in development, it's the one that is furthest along. When a clinical-stage biotech's lead compound experiences trouble, it's not uncommon for shares to get cut in half (or worse). Given today's update, it's understandable why traders are mauling the company's stock.

While PTG-100 looks like a bust, the company has two other interesting compounds in development. The first is PTG-300, which is currently in phase 1 as a potential treatment for iron overload disorders. The second, PTG-200, also in phase 1, is being studied as a possible treatment for Crohn's disease.

Interestingly enough, Protagonist Therapeutics already convinced Johnson & Johnson's Janssen division to sign a lucrative deal related to PTG-200's development while it was still in the preclinical stage. The agreement came with a $50 million up-front payment and milestone payments that could be worth up to $940 million, should PTG-200 prove to be a commercial success. Those are big numbers relative to Protagonist's current market cap of just $179 million.

However, while PTG-200 should offer shareholders some reason for hope, I'm not a fan of buying into money-losing businesses after they've experienced a clinical setback. That why I'll be avoiding Protagonist Therapeutics' stock for the foreseeable future and would suggest that you do the same.

Why Protagonist Therapeutics Is Skyrocketing Today
376%