Ford Motor Company (NYSE:F) unveiled what it's calling a "preview" of the Lincoln Aviator in New York City Wednesday. It's an all-new three-row crossover SUV that will go into production in 2019.

I got a close-up look at the Aviator at an event earlier this week. It may seem like just another upscale SUV, but there are a couple of details that give some insight into where Ford is planning to take its old luxury brand. 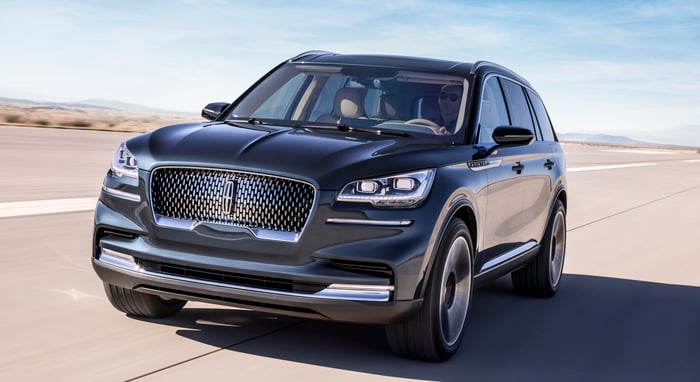 What it is: A new three-row Lincoln SUV

The Aviator is a brand-new three-row crossover SUV that will replace the elderly (and slow-selling) MKT. Lincoln executives were coy about exactly when it'll arrive at dealers, but they confirmed that it will go into production sometime in 2019. It'll be powered by an engine that Lincoln described only as "twin-turbo," and there will be an available plug-in hybrid system that will pair electric motors with that same twin-turbo engine.

The Aviator will be built on an all-new vehicle architecture, and that brings us to the first interesting detail: Unlike every other current Lincoln product other than the truck-based Navigator SUV, the new Aviator is rear-wheel-drive. (All-wheel-drive will be an option.)

That's a big deal. Here's why.

The Aviator is built on a new rear-wheel-drive platform. Its stance and details are unlike most SUVs from rival automakers. Image source: Ford Motor Company.

A surprise: The Lincoln Aviator has rear-wheel drive

The fact that the Aviator has rear-wheel drive is significant. German luxury brands BMW and Mercedes-Benz base many of their products on rear-wheel-drive platforms, as does General Motors' Cadillac. In today's market, rear-wheel drive suggests that a luxury vehicle was developed from the ground up as a luxury product -- as opposed to a fancied-up version of a mass-market product.

Of course, many luxury vehicles (including most Lincolns) are built on platforms shared with mass-market products. In Lincoln's case, that probably hasn't helped it win sales in the U.S.: Many buyers still see Lincolns as not much more than Fords with nicer leather. 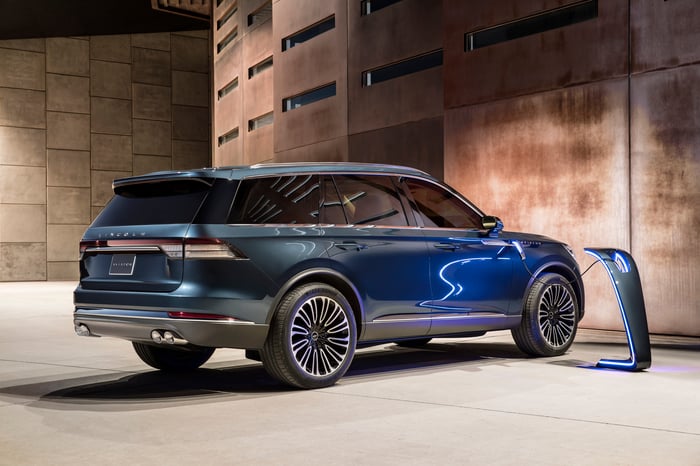 In keeping with Ford CEO Jim Hackett's push toward electrification, the new Aviator will be offered as a plug-in hybrid. Image source: Ford Motor Company.

Ford has been searching for ways to more thoroughly differentiate high-priced Lincolns from mainstream Fords. Making the Aviator rear-wheel-drive will certainly do that. But it raises an intriguing question: What else will share this all-new Ford platform?

Developing a new vehicle architecture is expensive. Before seeing the Aviator, my assumption was that it would be built on the new platform that will underpin the similarly sized next-generation Ford Explorer.

Nobody from Ford was willing to answer those questions yet. But the fact that there's one new rear-wheel-drive Lincoln suggests to me that there will be more, including -- perhaps -- an upcoming rear-wheel-drive version of the iconic Continental sedan.

The Aviator's looks are striking. In person, it looks smaller than it is. And in contrast to many other SUVs, it's not aggressive-looking -- at all.

That's no accident. Lincoln design chief David Woodhouse said that he instructed the Aviator's design team to use an image of a ballerina as their inspiration.

The ballerina is an athlete, very strong, very potent, but of course there's a lot of poise and grace with that. Too much in the marketplace these days, we see an attack visualized from our competitors. There's an overwhelming feeling in the marketplace of masculinity, of overtness and aggression. We want to be about seduction, not attack. [Emphasis added.]

Beyond the obvious implication -- like most luxury brands, Lincoln would love to draw more female customers -- there's a more subtle takeaway. 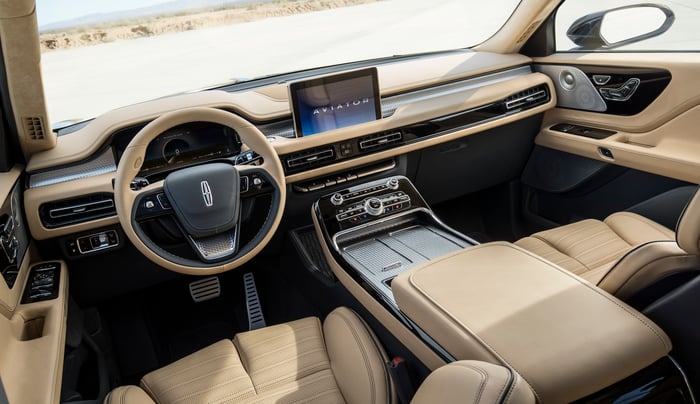 Lincoln pointedly isn't trying to emulate the example of the German luxury brands. It's creating something different -- and Woodhouse said that the Aviator is the first Lincoln that fully captures where the brand is going.

It has been about a four or five year journey with Lincoln. This is the culmination of a brand essence and a brand vision that you've seen parts of, but this vehicle really brings it home.

Lincoln's new boss, veteran Ford executive Joy Falotico, told me that she plans to keep Lincoln going in the direction established by her predecessor, Kumar Galhotra. (Galhotra became the president of Ford's North America business unit last month.) She noted that the Aviator's arrival will complete a revamp of Lincoln's entire lineup that began with its sedans in the 2017 model year. Meanwhile, she's working to bring the extravagant level of personal service offered by Lincoln's Chinese dealers -- called "The Lincoln Way" -- to its U.S. dealers.

The revamp of Ford's old luxury brand has been a long, and at times seemingly slow-moving, project. But with the unveiling of the Aviator, the end -- of the first phase, at least -- is now in sight.