We recently asked three of our Motley Fool investors for their favorite value picks for retirees. They told us that Apple (NASDAQ:AAPL), IBM (NYSE:IBM), and General Motors (NYSE:GM) all fit the bill. 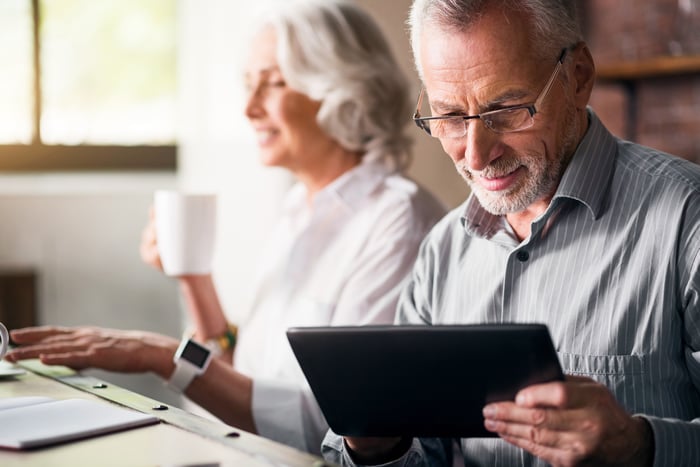 The most valuable company in the world

Leo Sun (Apple): Apple is a value stock hidden in plain sight. Its market cap of over $900 billion makes it the most valuable company in the world, yet the stock trades at just 15 times forward earnings. The company will also repatriate over $250 billion in overseas cash -- which will likely be spent on buybacks, dividends, and domestic acquisitions.

The common bear case against Apple is that it lives and dies by the iPhone, which generated 70% of its revenue last quarter. However, Apple has a feverishly loyal user base, and its expanding, prisoner-taking ecosystem of services -- including the App Store, iCloud, Apple Pay, and Apple Music -- boosts its revenue per user even as its phone sales peak. Much of its repatriated cash will likely be invested in the expansion of this ecosystem.

That's why long-term Apple investors pay closer attention to its services revenue, which rose 18% annually last quarter and accounted for 10% of its top line. Wall Street expects Apple's evolution from a hardware maker to a services provider, along with its unmatched pricing power in hardware, to boost its revenue and earnings by 15% and 25%, respectively, this year.

Those are incredible growth figures for a "value" stock. Apple also pays a forward dividend yield of 1.4%, which is supported by a low payout ratio of 25%. It's also hiked that dividend annually for five straight years. That great combination of value, stability, and income make Apple a solid retirement stock.

Tim Green (International Business Machines): What if I told you that a single company's technology powers $7 trillion of credit card payments each year, while also being in use at 92% of the world's top 100 banks and all 10 of the largest 10 insurers? I won't leave you in suspense: The company is IBM, and the technology is the iconic mainframe computer.

IBM is much more than a seller of hardware, and its vast base of existing customer relationships and a broad portfolio of hardware, software, and services are both key competitive advantages. Roughly 95% of Fortune 500 companies are IBM clients, and 90% of IBM's top 100 clients purchase cross-IBM solutions. That sticky customer base has allowed IBM to embark on a multi-year transformation, investing heavily in areas like cloud computing and artificial intelligence, while continuing to produce over $12 billion of free cash flow each year.

IBM has now reached an inflection point, with total revenue expected to grow this year for the first time since 2011. IBM's growth businesses represent nearly half of its total revenue, and they're still growing at a double-digit rate. Cloud computing revenue hit $17 billion in 2017, growing by 24%. All 10 of the top 10 banks, 9 of the top 10 retailers, and 8 of the top 10 airlines are IBM cloud-as-a-service customers.

IBM has been around for over 100 years, not because it necessarily leads the charge when it comes to new technologies, but because it's been able to adapt when necessary. With the stock trading for just 11.5 times adjusted earnings and sporting a 3.75% dividend yield, IBM is a value stock that deserves a place in your retirement portfolio.

Rev up your retirement

Jeremy Bowman (General Motors): Investors don't normally think of cyclical stocks like industrials as being value stocks or safe stocks for retirement since they tend to rise and fall with the broader macroeconomic cycle. However, one such stock worth considering in spite of these characteristics is General Motors.

GM has bounced back vigorously from its recession-era bankruptcy and has made smart bets on autonomous vehicle technology with its acquisition of Cruise Technologies, investment in Lyft, and partnership with Uber. The Chevrolet-maker has also put up strong profits due to the success of its high-margin pickup trucks and SUVs. The stock trades at a rock-bottom P/E ratio of just 5.7. That cheap valuation is a reflection of the domestic auto market having passed its cyclical peak, and that GM expects flat profits this year.

However, management sees a return to profit growth in 2019 as it releases a new line of pickup trucks. Meanwhile, investors can sit back and collect a 4% dividend yield, and the cheap valuation means investors can easily benefit from share buybacks as the company repurchased $4.5 billion in shares last year and is likely to repurchase a similar amount this year.

Beyond the stock's low price, the company also has a leading position in autonomous vehicles. Expected to revolutionize the industry, GM plans to release driverless cars next year and could launch its own ride hailing service to challenge Uber and Lyft. Considering that, investors may have an opportunity to buy a "tech" company that's being valued more like a declining manufacturer.