Shareholders of small-cap biotech Geron Corporation (NASDAQ:GERN) are in for yet another wild day today. The company's stock fell by over 18% on heavy volume right out of the gate this morning due to fears arising from a possible class action lawsuit.

The potential lawsuit reportedly stems from the STAT article published yesterday by Adam Feuerstein that cast doubt on the strength of Geron's mid-stage trial data for its anti-cancer compound, imetelstat. As of 10:45 a.m. EDT, Geron's shares are down by a whopping 28.4%. 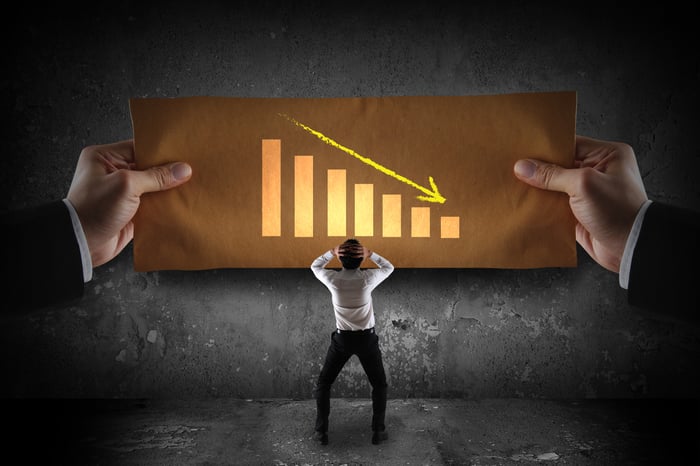 Geron's valuation is currently based purely on the perceived value of imetelstat as a treatment for the bone marrow disorders myelofibrosis and myelodyspastic syndromes. After the company's fourth-quarter earnings release, for instance, the stock took flight because investors apparently believed the drug was on the right track. But Feuerstein and some other well-known bears have suggested otherwise, causing Geron's stock to pullback in a significant manner.

The point is that this raging battle between the bulls and the bears is almost certainly going to continue until imetelstat's safety and efficacy results are released for public consumption. Until then, this argument is nothing more than conjecture on both sides.

As a shareholder, I'm obviously biased in this debate, but I do think this sell-off is overdone for a couple of reasons.

First off, I found Geron's presentation at the 17th Annual Needham Healthcare Conference yesterday to be reassuring in the wake of this ongoing volatility. For example, the expansion phase of imetelstat's ongoing myelodyspastic syndromes trial has already completed enrollment. As a result, this trial may now end up playing a larger-than-expected role in Johnson & Johnson's continuation decision later this year.

Next up, CEO John Scarlett drove home the point that the patients in the trial for advanced myelofibrosis all had progressive disease, yet the median overall survival still hasn't been reached in either dosing arm at a median follow-up of 19 months. That's a key point that is arguably being underappreciated by the market right now.

Last but not least, I think it's important to note that Geron's fourth-quarter press release was conservative in nature. The company certainly didn't make any particularly strong claims regarding imetelstat's efficacy in advanced myelofibrosis -- beyond noting that median overall survival had yet to be reached and that should be an easily verifiable fact. So I'm not convinced these lawsuit investigations are a real risk factor here.

Again, I'm biased, but Geron, in my opinion, has a real shot at success with imetelstat based on the data available so far.