El Pollo Loco Holdings Inc (NASDAQ:LOCO) stock has suffered a slow, debilitating decline over the last three years, and now sits roughly 60% below its initial public offering pricing set in July 2014. The company's shares aren't alone in their suffering -- fast casual chains have faced headwinds as their quick service restaurant (QSR) competitors, led by a resurgent McDonald's (NYSE: MCD), have wrestled back a portion of lost customer traffic. Yet a significant amount of El Pollo Loco's woes over the past three years have been self-inflicted. Below, we'll review factors behind the company's performance, and determine if it's safe for value-minded investors to add these shares to their portfolios.

The citrus-marinated, fire-grilled chicken chain bills itself as "QSR plus," meaning that it seeks to serve customers at the speed of a fast food chain, but with a menu offering and restaurant ambience closer to that of fast casual establishments. 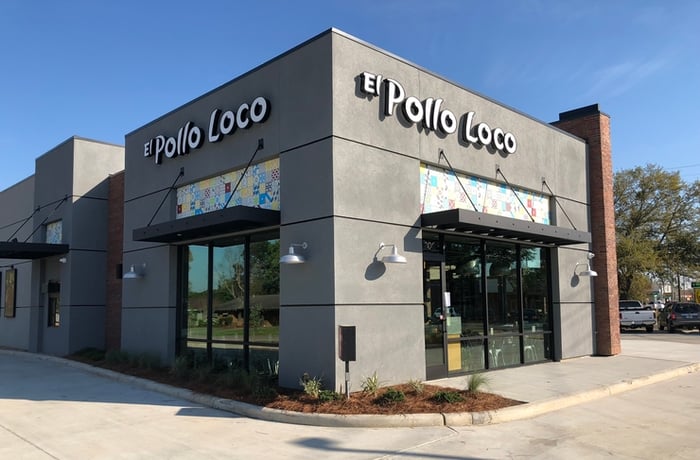 In some instances, however, speed can be an impediment rather than a virtue. In late 2014, the company engaged in a brisk and significant push into major Texas markets, including Dallas and Houston, only to find that its concept wasn't catching fire with Lone Star State residents the way it had in El Pollo Loco's home base state of California.

Performance in the expansion set was so execrable that the company took an impairment charge of $27.7 million in 2017. The impairment was expensed against its entire asset base of 19 company-operated restaurants in Texas (franchisees operate 20 additional locations in the state). The company also recorded an additional $4.9 million in impairments against a handful of under-performing restaurants in California and Arizona.

The poor results have weighed on restaurant margin -- that is the difference between revenue and direct restaurant expenses, including food, labor, and occupancy costs. Restaurant margin, which hit a healthy 27% in 2014, has drifted south, to just 18.5% last year.

There are preliminary signs, however, that the margin trend may have bottomed. After the closure of four Texas restaurants and one in Arizona last year, and given an expected traffic boost from a refreshed store format, El Pollo Loco forecasts 2018 restaurant margin of between 18.7% and 19.6%. For clarification, the 19 asset-impaired company-operated locations in Texas mentioned above are still being operated -- for the time being.

A guarded response to price competition

The outlook for restaurant margin in 2018 might be higher, if not for promotional pricing, which may be activated in the second half of this year if needed. During El Pollo Loco's most recent conference call, CFO Larry Roberts noted that the chain was weathering a raft of price competition, not simply from direct competitors, but from the giant QSRs, including McDonald's, which recently unleashed a new value menu, as well as Burger King.

Acknowledging that El Pollo Loco's core customers tend to be price-driven, Roberts commented that the industrywide frenzy of discounting is hurting Loco's comparable store sales growth. "Comps" are expected to decline by 1 to 2 percentage points in the first quarter of the current year.

The company has so far resisted the temptation to start whittling away at its menu prices just to meet competition head on and maintain traffic. Rather, El Pollo Loco has increased pricing in line with inflation over the last year, and intends to take prices up by 1.5% in 2018, notwithstanding the promotional pricing that it might undertake later this year. The chain has been hesitant to roll out dollar-based value menu items, a virtue when one considers that it's attempting to migrate from a price sensitive customer to one of a more loyal stripe.

Initiatives to improve customer retention include the "Vision Design" for new stores. This redesign features contemporary store exteriors coupled with rustic interiors, picnic-style seating, and a view of the large flame grills on which restaurants prepare signature chicken dishes. El Pollo Loco is also gradually building out its digital loyalty program, which now boasts 500,000 subscribers, a credible base for a relatively small restaurant chain.

The worst may be over for "LOCO" shares

Now that the company has reduced its footprint and ambitions in Texas, and taken impairment charges, some of the risk in these shares has diminished. El Pollo Loco is opening locations at a more cautious pace in 2018 -- it will build six to eight company-operated restaurants, versus 16 in 2017. Franchisees will also open six to eight new locations, roughly equal to the seven units they opened last year.

Near-term challenges include those flat-to-negative comps and slim restaurant margins we discussed above. But incoming CEO Bernard Acoca, who takes over this month from retiring CEO Steve Sather, has deep experience in the rough and tumble dynamic of competing against QSRs, having spent 10 years in marketing at Yum! Brands prior to leading Starbucks' Teavana unit.

Despite its top-line pressures, El Pollo Loco may present an opportunity for patient value-style investors. The company is still quite profitable. If we add back the one-time 2017 impairment charges, El Pollo Loco generated a net income profit margin of more than 10% last year. It also booked $64.2 million in EBITDA (after the same adjustment for impairment charges) on $401.7 million in 2017 sales.

While skepticism over El Pollo Loco's growth prospects has weighted down its stock price, customer-centric initiatives should eventually help to rekindle sales momentum. Management has identified about 30 small markets within California that are ripe for unit expansion. And the testing of new markets, such as Louisiana in the deep South (see the graphic above), should pave the way for more cautious expansion later on. At the moment, El Pollo Loco trades at just 13 times forward earnings -- an attractive price given its still-latent potential.