They absolutely hated a very similar third-quarter report, after all. Here's an exclusive look at CEO Jim Whitehurst's own analysis.

Open-source software veteran Red Hat (RHT) crushed it in the fourth quarter of fiscal year 2018. The company beat Wall Street's estimates across the board, just like it did in the third quarter. Curiously, the market reaction went in the opposite direction this time.

After the third-quarter report, Red Hat shares fell more than 7% the next day. This time, the stock opened 9.3% higher on Tuesday morning following the Monday night report. That was a fresh multiyear high, dating all the way back to the dot-com crash. So I had Red Hat CEO Jim Whitehurst explain to me how this report was different from the previous quarter's.

Analysts would have settled for non-GAAP earnings of $0.81 per share on sales near $762 million. As a reminder, those analyst targets were right in line with Red Hat's own fourth-quarter guidance.

The stockpile of deferred revenue -- payments received for future services under long-term contracts -- rose 25% year over year to land at $2.6 billion. These unearned sales will be counted as proper revenue over the next several years, giving investors a clear view of Red Hat's long-term sales growth. Note that the deferred sales are stacking up much faster than the earned revenue, which "only" increased by 21% in fiscal 2018. Therefore, top-line sales are set to accelerate from here. 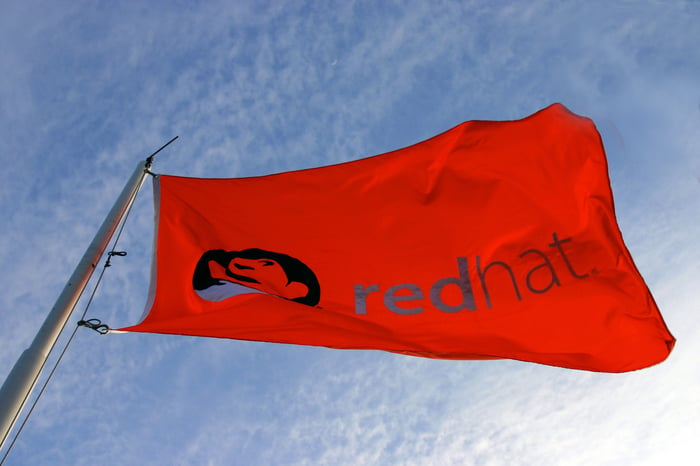 What's next for Red Hat?

Structurally, Red Hat is leaning less and less on its namesake flagship, the Red Hat Enterprise Linux (RHEL) platform. RHEL subscriptions accounted for 65% of all fourth-quarter sales, and the company has a stated goal of bringing that ratio all the way down to 50% over the next "several years." On the phone with me, Whitehurst said that RHEL keeps confounding that goal by growing faster than expected -- 17% in the fourth quarter versus a "low teens" target. Other packages like Ansible, OpenShift, and OpenStack are growing their sales much faster than RHEL, but these high-level changes take some time.

Looking ahead, Red Hat expects sales to grow roughly 18% in fiscal year 2019 and drive adjusted earnings 15% higher. For the first quarter, top-line revenue should rise 19% year over year to approximately $805 million. On the bottom line, adjusted earnings are projected at $0.68 per share, 21% above the year-ago period's result.

OK, so what's up with the big jump?

Now that we've covered the most important bases of the report itself, let's get back to the difference between Red Hat's third and fourth quarters. Whitehurst explained it to me this way:

Last year's Q3 had 9% billings growth and Q4, I think, was 29%. So people were probably expecting us to have a really strong third quarter and a weaker Q4 this year. But the reason we had that slow Q3 and strong Q4 last year was that a large government deal slipped from one quarter to the next. And once they slip, they have slipped forever.

So investors who looked back at the 2017 fiscal year for clues to Red Hat's seasonal sales trends would have built incorrect prediction models because last year's business was made unusual by the timing of a single government deal. That's how the third and fourth quarters could deliver similar results while triggering very different market reactions.

Any way you slice it, Red Hat is a rock-solid business with fantastic growth prospects. I remain a happy shareholder for the long run.