Marketers will spend $80 billion more on internet ads than TV ads in 2020.

Marketers will spend about $70 billion more on digital advertising in 2020 than they did last year, according to estimates from Zenith. Meanwhile, global ad spend across newspapers, magazines, television, radio, cinemas, and outdoor billboards will combine to grow just $1.6 billion during that same period.

As consumers spend less time watching television, reading newspapers and magazines, and listening to the radio, they spend more time streaming media on YouTube or browsing articles found on Facebook (META -0.74%). The ad dollars are following. And, as you might expect, two big companies are poised to benefit from the growth more than any others: Facebook and Google, the Alphabet (GOOG -1.24%) (GOOGL -1.02%) subsidiary. 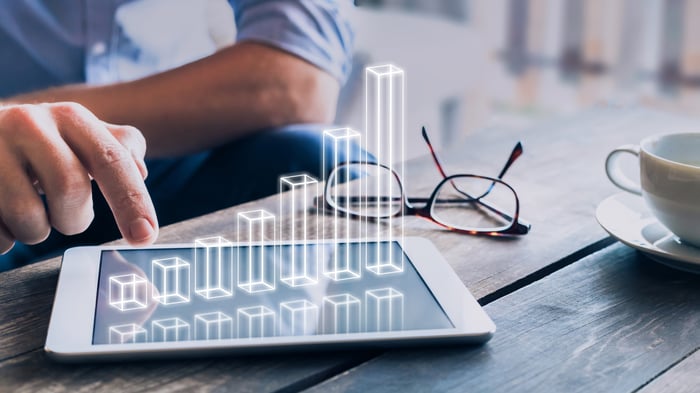 Zenith expects social display ads and video display ads to grow at least twice as quickly as any other format.

YouTube has historically been strong on mobile, where its 1.5 billion users spend over 1 hour per day streaming video on average.

During Alphabet's fourth-quarter earnings call, management repeatedly called out the growth of YouTube on television sets. Google CEO Sundar Pichai said, "People are thinking of YouTube more as a key part of their TV viewing experience." He later added, "Our growth has been significant there." The growth of YouTube both on TV sets and off offers an excellent opportunity for advertisers to find an audience amid declining television viewership.

Facebook, meanwhile, is also investing in video content, which it intends to monetize with interstitial advertisements. But it also stands to benefit from the growth in social display advertising over the next three years. Social advertising spend is set to grow more on an absolute basis than any other advertising medium, and Facebook is still winning the lion's share of social ad spending. Most of that growth will come from Instagram and its other apps as growth on the flagship app slows.

Search advertising is being driven by mobile, as consumers now have a constant internet connection in their pockets. Google is even more dominant on mobile, taking 95% of the global market. That said, Google pays more, on average, for searches on mobile due to higher traffic acquisition costs (TAC) for things like placement as the default search engine in mobile browsers.

Google is well-positioned to win most of the growth in search advertising, but that growth is more expensive to acquire than its desktop ads.

It's hard to see smaller competitors making a significant dent in Google and Facebook's dominance of global advertising. While the two may see a small decline in their share of U.S. advertising spend over the next couple years, they're still experiencing plenty of growth outside of the U.S. to make up for it. The numbers from Zenith indicate there's still plenty of room for both companies to keep growing, and investors bullish on the global economy long-term would do well to follow the ad money.

An Activist Investor Is Going After Alphabet. Does That Make the Stock a Buy?
356%