You might be surprised by the tight spot the company finds itself in.

Six years ago, I wrote a fictitious account for fool.com about a woman named Glon Mert -- an anagram of the words "long term." Glon's father bought a single share of Coca-Cola (KO 0.88%) for her in 1920 for $21. By 2012 -- after including dividends reinvested and stock splits -- that single original investment of just $21 was worth...over $9 million!

The point of the article was simple: While Coke might not be a sexy stock, the simple power of compounding dividends and the strength of the company's brand could produce life-altering wealth for those who are patient.

But my tune has changed as far as Coke is concerned. I sold my shares long ago. And if you're looking for a stock to provide solid, safe dividends for a few decades to come, I think there are better options out there. There's no denying the strength of Coke's brand. According to Forbes, Coke has the fifth-strongest brand in the world, valued at over $56 billion. And Coke is much more than just its namesake beverage: The company owns Minute Maid, Powerade, Odwalla juices, Vitamin Water, and Dasani -- to name just a few "healthier" options.

But my concerns about the company aren't limited to the fact that its primary product is basically sugar-water, and that as we become more health-conscious, we'll be allowing less of the stuff in our bodies. Although, to be clear, that's still an important concern.

No, instead, I think there's an even larger problem afoot: the death of the power of big brands in consumer goods. As former hedge fund manager Mike Alkin has demonstrated, the baby boomers who are brand-loyal will be spending less in retirement and the millennials filling their shoes are brand-agnostic.

The pricing power that Coke has enjoyed for almost a century is being pulled from underneath the company's feet. The signs are showing.

While it's not instructional to look at revenue figures alone as the company has refranchised its bottling operations, the overall volume of unit cases of drinks and concentrate have been in slow decline. 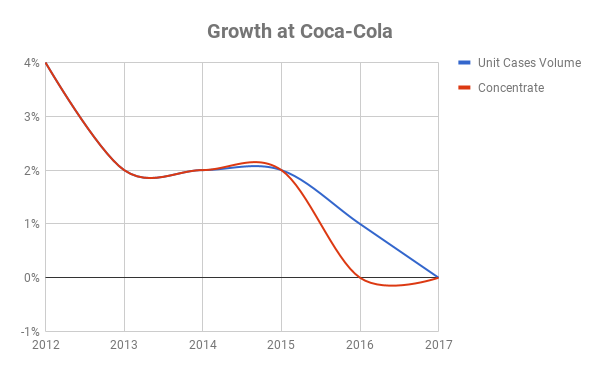 Your eyes aren't deceiving you: Volume didn't grow at all last year. Business in Latin America is shrinking, and it's at zero unit cases growth in North America. The Asia Pacific region is what's keeping the company from decline right now. The company was able to grow organic revenue 3% last year thanks to price increases.

Overall, this wouldn't be a huge deal if such negative headwinds were baked into the company's stock price. But I don't think that's the case. Shares currently trade for 35 times trailing free cash flow! Even where we sit now -- nine years into a historic bull market -- that's expensive.

Then, of course, we have the company's dividend. Currently yielding 3.7% and with a history of 55 consecutive years of dividend increases, it seems like a sure thing. But when we dive into the weeds, things appear much more perilous

When it comes to dividends and their sustainability, there's no metric more important to watch than free cash flow -- and the percentage of free cash flow being used to pay shareholders. For a long time, Coke had a very safe payout ratio, never using more than 80% of free cash flow to make its payments.

That, however, has changed in the past two years. 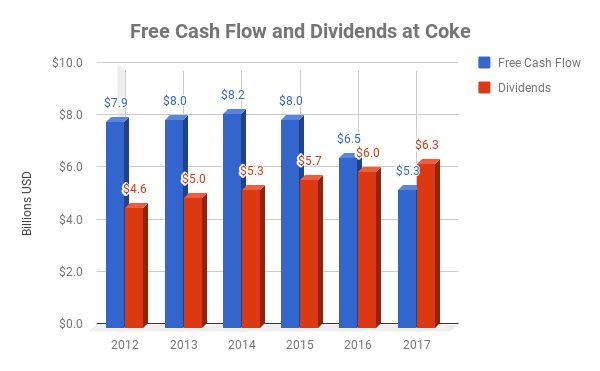 Management claims that work on the bottling investments reduced free cash flow by up to $1 billion last year. Coke currently has enough cash -- a net $12 billion position -- to continue paying the dividend without investors having to worry over the short term. But the trends have been in a long-term decline.

Those who buy Coke stock now are likely hoping for meaningful dividend increases for decades to come. As things stand, it's tough to see how the company could continue inching its payouts up without running the risk of becoming financially fragile, meaning it will break in times of chaos.

I'm not necessarily encouraging investors to short Coke, i.e., bet on a drop in price, but I am hoping that any near-retirees -- who would be looking for income investments and not have decades to wait for a stock bet to pay off would enter into this investment with eyes wide open. I won't be buying shares anytime soon -- and even then, only if there are meaningful changes in the company's growth and free cash flow situation. I have voted for the company to underperform the broader market in my CAPS profile, and I think there are better options for your money.