Shares of graphics chip designer NVIDIA (NASDAQ:NVDA) are up about 1,750% over the past five years. Booming demand for its gaming graphics cards, rapid growth in enterprise sales, and the long-term potential of self-driving cars have convinced investors that NVIDIA deserves to trade at a lofty valuation.

One analyst isn't as optimistic. David Wong of Wells Fargo Securities cut his profit forecast for the chip company on Monday, citing concerns about cryptocurrency-related demand and the sustainability of NVIDIA's growth. He also reiterated an underperform rating on the stock, along with a price target of just $100.

With NVIDIA trading for around $225 per share today, that rock-bottom price target is about 56% below the current stock price. It's certainly pessimistic, but it's not as crazy as it sounds. 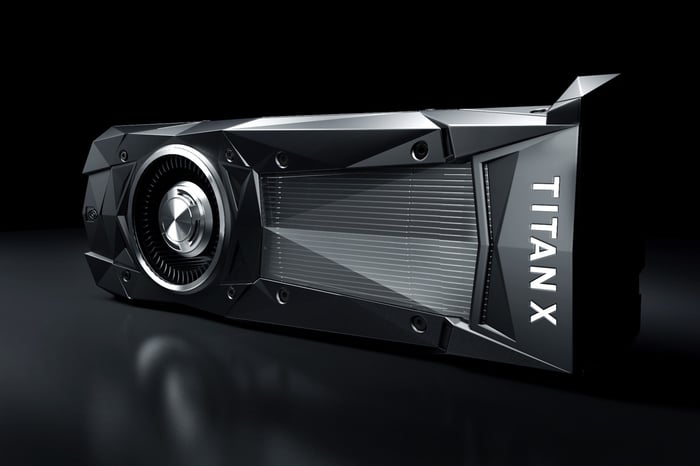 Years of gravity-defying growth have left NVIDIA with a stratospheric valuation. The company generated revenue of $9.71 billion and earnings per share of $4.82 in fiscal 2018, up 41% and 88%, respectively. With a market capitalization of around $133 billion, NVIDIA trades for nearly 14 times sales and 47 times earnings. NVIDIA's price-to-sales ratio is now well above its dot-com bubble peak.

That valuation assumes two things. First, that NVIDIA will continue to grow at a blistering pace. And second, that NVIDIA's fat margins are sustainable. The company generated an operating profit of $3.2 billion last year, good for an operating margin of 33%. That's way above typical values over the past decade. 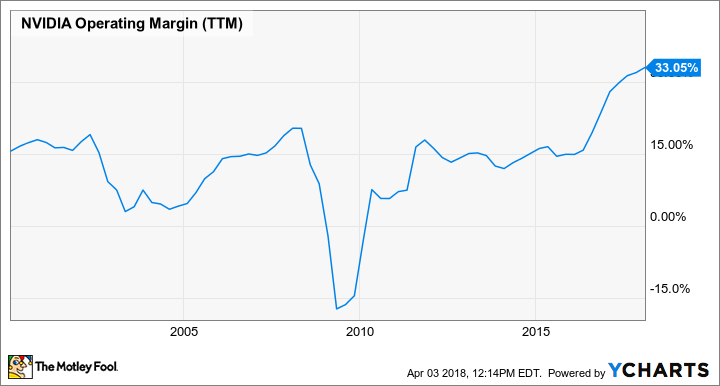 Strong demand for NVIDIA's gaming GPUs and the proliferation of GPUs for accelerating artificial intelligence and other data center workloads have been the drivers behind NVIDIA's impressive growth and margins. The automotive business is still small and not growing very fast, but that's because self-driving cars are still only being tested. Selling GPU-powered platforms to auto companies could become a big business for NVIDIA once self-driving cars start to take off.

There's a lot to like about NVIDIA. But there are also plenty of ways the company could be derailed, sending the stock in the direction of Wong's pessimistic price target.

The crux of Wong's argument is that cryptocurrency-related demand is artificially propping up NVIDIA's sales and profits. Those mining cryptocurrencies like Ethereum use powerful GPUs to perform the computationally intensive calculations. Demand from miners has created a shortage of graphics cards, pushing prices well above MSRP.

This slump in demand, coupled with a potential flood of used graphics cards from miners no longer able to turn a profit, will hurt NVIDIA's results. Wong believes it could start to impact NVIDIA in its quarter ending in July 2018. We won't know exactly how much NVIDIA's gaming business has been boosted by cryptocurrency until the bottom falls out.

Beyond the gaming business, NVIDIA's dominance in the AI accelerator market will be threatened by specialized chips designed specifically for the task. Alphabet's Google is using its own custom-designed AI chips in its data centers, and it claims a vast performance improvement compared to GPUs. GPUs are probably not the be-all and end-all of AI, and that makes predicting NVIDIA's future data center growth a challenge.

Based on NVIDIA's fiscal 2018 results, that $100 price target would represent a price-to-sales ratio of 6.5 and a price-to-earnings ratio of about 21. If growth remains robust and margins hold up, this price target wouldn't make all that much sense. But investors shouldn't discount the possibility that NVIDIA's record-breaking profitability is more of an anomaly than the new normal. There are certainly reasons to be concerned.