Please ensure Javascript is enabled for purposes of website accessibility
Log In Help Join The Motley Fool
Free Article Join Over 1 Million Premium Members And Get More In-Depth Stock Guidance and Research
By Maxx Chatsko – Apr 3, 2018 at 7:48AM

International Paper has averaged $1.9 billion in free cash flow in the last five years (sort of).

By most measures, pulp and paper leader International Paper (IP 2.18%) has been crushing it in recent years. The boring stock has rewarded investors with a sizable dividend that currently yields 3.6%. Business has been booming thanks to its leading position in supplying containerboard (read: mostly cardboard) for nearly insatiable e-commerce demand. That trend has allowed the company to deliver an average annual free cash flow of $1.9 billion over the last five years.

You see, International Paper counts its cash contribution to its currently underfunded pension plans as a financing cash inflow. Is that a cheap way to inflate the numbers? Should investors be concerned with the accounting of the company's all-important free cash flow, especially given its status as a blue-chip dividend stock? As it turns out, this is a great example for investors to explore some of the nuance that goes into calculating free cash flow for the companies they own. 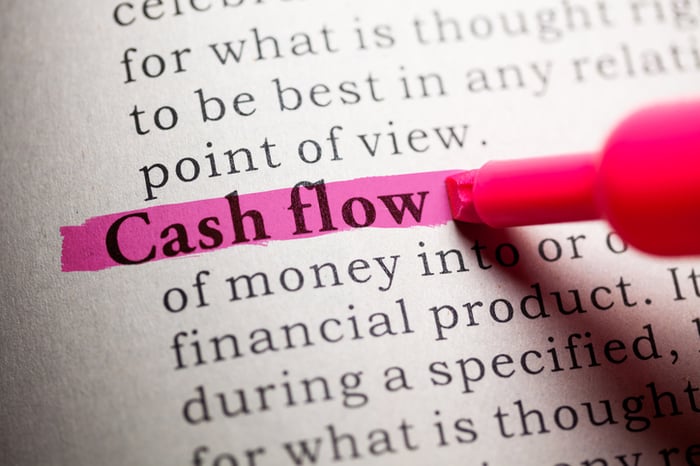 At the simplest level, the balance of a company's pension plan is calculated by taking all of the contributed assets and subtracting all of the future projected obligations. Many companies are downright awful at keeping up with their responsibilities, which means they have underfunded pensions.

For better or for worse, underfunded pension obligations have rarely been a concern of Wall Street, but they can cause mayhem -- and usually at the worst times. The most timely example is General Electric. The industrial conglomerate has no shortage of problems to hammer out, so analysts decided to tack on the $31 billion pension obligation shortfall as well to the company's recent stock price. But thanks to a simple accounting trick widely used by International Paper in recent years, the troubled company could report any extra efforts to meet its underfunded pension obligation as a contribution to free cash flow in future periods.

How does that work, exactly?

International Paper reported the following free cash flow walk back for its full year of operations in 2017:

Because pension plans aren't technically a balance sheet item, underfunded accounts don't show up on financial statements. That allows cash contributions to be tallied as cash inflows or cash outflows on a quarter-to-quarter basis, even for the most severely underfunded pension plans.

To be fair, this accounting practice doesn't sit well with all investors. After all, when a company has underfunded pension plans stemming from years of coming up short for its obligations, it seems a little cheap to count cash contributions as a voluntary payment and therefore record them as a cash inflow.

While International Paper has a history of running a deficit with its pension obligations, the company has been making noteworthy progress with annual cash contributions to meet its responsibility to former and current employees. Consider the trend in recent years:

Pension plan account balances are determined by a range of factors including company contributions, the value of various investments, and acquisitions completed during specific fiscal years. Nonetheless, because cash contributions to pension plans are considered voluntary payments, they're added to free cash flow -- and can make a sizable difference.

Does International Paper have a cash flow problem?

At least in International Paper's case, this doesn't seem to be a major concern for investors. The company has delivered strong operating profits every quarter dating back to the beginning of 2010, including a record level in the fourth quarter of 2017. The proliferation in online shopping has handed the pulp and paper company a golden opportunity for growth and margin expansion, which doesn't figure to end anytime soon.

That said, the company's voluntary cash payments to its pension plan in the last three years have forced it to dip into external funding to pay its dividend. The business has accumulated only $193 million in free cash flow since 2015 once voluntary cash payments are backed out, but has paid $2.2 billion in dividends in that span. Management believes growth projects and efficiency programs will make this three-year trend a moot point in the long-term. It might be right, as International Paper ended 2017 with a coverage ratio of 1.6 and a debt to capital ratio of 0.63 -- both considered healthy.

Long story short, this accounting trick could be used for several more years until the company meets or exceeds its pension obligations. After that, the business could find itself with a considerable amount of extra cash to go around, especially if growth projects continue to deliver. Investors will just want to keep a watchful eye on the cash flow statements to ensure free cash flow trends in the right direction.