Please ensure Javascript is enabled for purposes of website accessibility
Log In Help Join The Motley Fool
Free Article Join Over 1 Million Premium Members And Get More In-Depth Stock Guidance and Research
By Lee Samaha – Apr 3, 2018 at 7:18AM

The Dividend Aristocrat is projecting an increase in its payout in the coming years.

Emerson Electric (EMR -1.32%) is a much-loved stock among income-seeking investors, and for good reason: The company has raised its dividend every year since 1956. Moreover, Emerson's recent investor conference saw management raising its midterm revenue and earnings targets on the back of improving end markets. Let's take a look at what management forecasts, and whether Emerson Electric stock is worth buying. 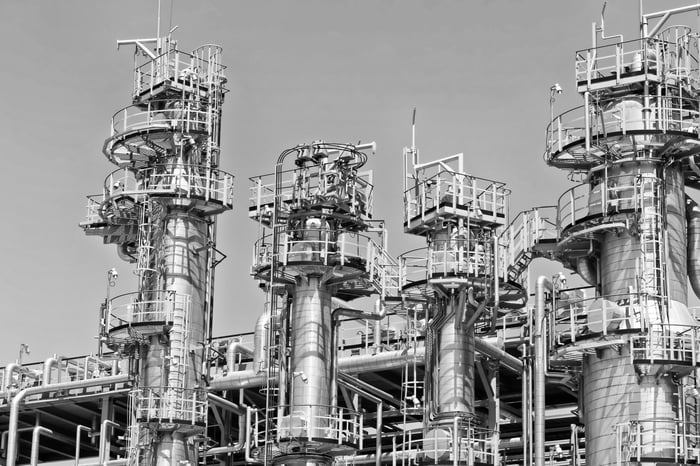 Back at the previous year's investor conference, CEO David Farr had forecast around $20 billion in revenue and $3.85 in EPS for 2021. Fast forward to this year's event, and he upgraded 2021 expectations to $21 billion and $4.50 EPS, and he also outlined plans to increase the growth rate of its dividend payouts to 4% to 5%, from 1% currently.

The $1 billion increase in the revenue forecast is coming from an improvement in underlying growth prospects, with underlying growth now expected to increase at a compound annual rate of 5% from 2016-2021, compared to the previous estimate of 3.5%. As you can see below, the company's sales growth has bounced back strongly, largely as a result of a recovery in industrial production in the U.S. and stronger oil and gas prices encouraging more capital investment in Emerson's process automation solutions. 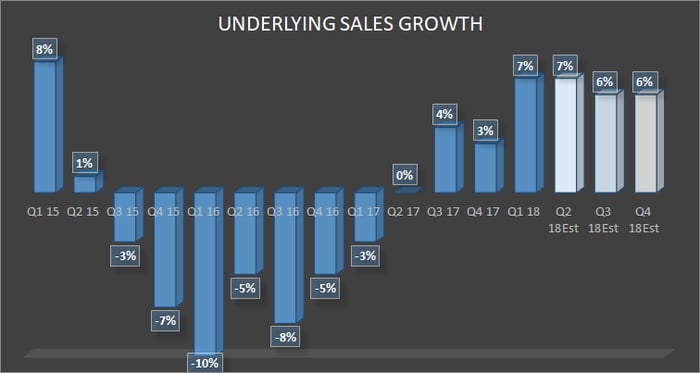 Turning to the increase in 2021 EPS guidance, it's clear that tax reform is helping matters, but around half of the improvement is due to organic improvement. 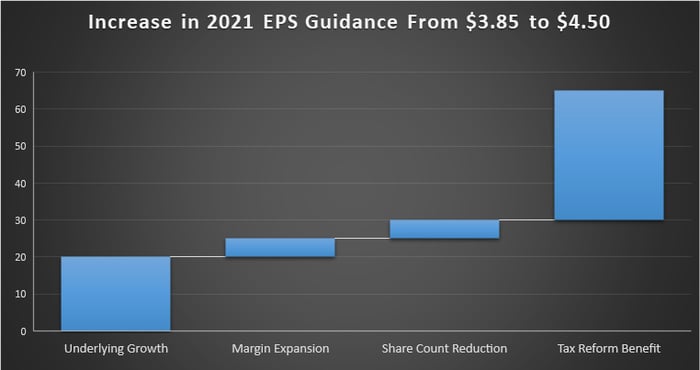 In a nutshell, Emerson Electric is a company with good near-term earnings momentum, and Farr has done a good job of turning around performance while continuing to reward investors with dividend increases -- something that looked doubtful at the end of 2015.

Moreover, a look at the automation sector shows that process-automation-heavy companies like Emerson are set to grow more than industrial automation companies like Rockwell Automation (ROK -0.31%) in 2018 -- largely due to recovering energy capital spending.

Emerson Electric has a target of paying out 40% to 50% of its annual free cash flow (FCF) in dividends, so it's important to look at the company's projections for FCF and dividends.

As you can see below, its dividend-to-FCF ratio was above its targeted band in 2017 and probably will be for 2018, too. However, the strong increases in earnings and FCF expected in the coming years mean that the dividend payout is likely to be well within the target by 2021. In fact, Farr suggested it would increase by 4% and 5% in 2020 and 2021.

All of this means Emerson remains a decent stock for dividend-seeking investors in the coming years -- not least because the current yield on a 10-year Treasury note is around 2.8%.

Keep an eye on energy prices, though

That said, it's one thing to have medium-term targets and another thing to actually hit them. On the plus side, Emerson Electric has a highly regarded management team, and Farr has managed to grow the dividend even while selling its cash-generative network power business to a global investment firm, Platinum Equity. Meanwhile, Emerson has been restructured into two segments -- automation solutions, and commercial and residential solutions -- and the acquisition of Pentair's valves and controls business helps focus the company on its core strength in process automation.

On the other hand, it's clear that Emerson's prospects are tied to energy prices and the willingness of processors (chemicals, refining, and oil and gas power) to engage in capital spending. Around 40% of Emerson's automation solutions revenue comes from oil and gas, and refining. And as you can see in the first chart above, when oil prices fall sharply -- as they did between 2014-2016 -- Emerson's sales growth is likely to falter.

Where next for Emerson Electric?

The purchase of Rockwell Automation would have helped diversify Emerson's end-market exposures and created an American champion in a field (industrial automation) dominated by European companies like ABB, Siemens and Schneider Electric.

But for now, Emerson's prospects remain somewhat tied to energy prices. Any falls in oil prices could constrain management's ability to aggressively grow earnings, cash flow and dividends, while a move in oil prices back to $100 would surely have analysts scrambling to increase earnings forecasts for the company. If you are confident of energy prices holding ground, then Emerson Electric is a good candidate for dividend hunters.