A look at stocks in the automation sector and why Rockwell remains well-positioned for 2018.

The results from the leading automation companies are in, and if I had to rank them by their latest quarterly performance, I wouldn't put Rockwell Automation at the top of a pack which includes Emerson Electric, Siemens, and ABB Ltd. No matter, I still think Rockwell is the best way to invest in the automation sector. That said, let's take a closer look at Rockwell Automation's quarter and prospects for 2018.

The automation market can be broadly split into three related and overlapping markets: process automation, factory or discrete automation, and the software that runs these automated processes. 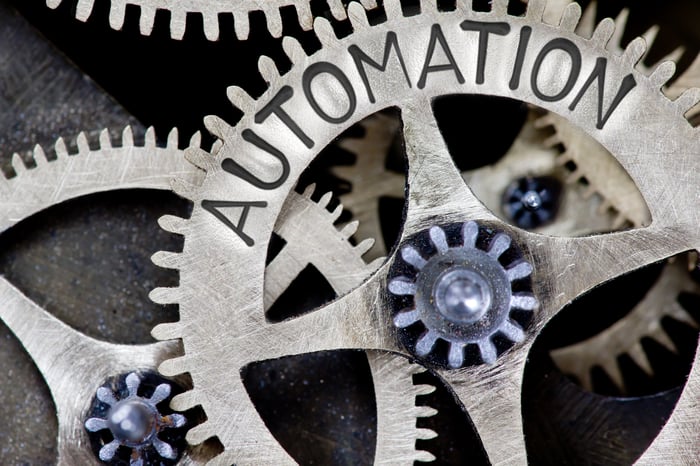 For reference, process automation involves processing raw materials into products (oil and gas processing, chemicals, power, etc.) while factory automation involves automated processes in the manufacturing industry (automobile production, packaging, semiconductors, etc.). Naturally, the software to develop, manage and efficiently run these processes is made by the leading automation companies. The opportunity to grow sales through developing digital and industrial internet solutions is a key reason to buy the sector.

Generally speaking, factory automation is seen as growing slightly more than process automation, not least because it has the secular growth driver of emerging market countries increasing the amount of automation they use in their manufacturing processes.

Why Rockwell Automation is the go-to stock

Research by UBS estimates the market share of each company below. ABB and Siemens are attractive companies in their own right, but they are diversified conglomerates with fingers in many other pies, while based on full-year 2017 figures, Emerson Electric generates 53% of its earnings from automation, and Rockwell Automation is a pure play on automation.

Theoretically, at least, Rockwell should be the most attractive stock in the sector. There are four key arguments why:

Indeed, as you can see below, Rockwell's sales growth has exceeded Emerson Electric's in recent years, and the company recovered strongly in 2017 as U.S. industrial production picked up. Three reasons to be concerned

Third, in a quarter where many other industrial companies (including Emerson Electric) raised full-year sales guidance, Rockwell merely maintained it -- this comes after a year in which the company upgraded full-year 2017 guidance in every quarter.

Has Rockwell Automation lost its touch?

Frankly, I don't think so, and I think it remains the best long-term play in the sector. There are four counter-arguments which help expain why the first-quarter might have been slightly disappointing.

Second, Rockwell has relatively more exposure to the auto sector, and given that its sales there grew more than 10% in the first quarter of 2017 (and more than 20% in fiscal 2017), it was always going to be difficult to beat in the same period this year. In other words, the specific auto industry exposure held back Rockwell in the quarter.

Third, Emerson Electric is doing relatively better because of its process automation exposure -- a market that's bouncing back from a recession caused by the slump in oil prices. Indeed, Rockwell's management remarked that its heavy industries-related sales were strong, and Siemens had a "particularly strong performance in the process automation business." Simply put, it's not that Rockwell is doing badly, but that process automation is doing particularly well at the moment

Finally, it's worth remembering that a lot of Rockwell's business is short-cycle, meaning management doesn't have a huge amount of visibility on next quarter's growth and that sales growth can pick up quickly in the light of an improvement in industrial conditions -- something most commentators expect as a result of tax reform.

All told, Rockwell didn't have a standout quarter, but there also wasn't anything to suggest the company isn't going to have a strong 2018 provided economic growth picks up as expected. I think it remains the pick of the automation sector and wouldn't be surprised if sales and earnings estimates are raised in future quarters as industrial production growth and capital spending pick up.

3 Industrial Stocks to Buy Before the Market Recovers
376%