Build up your retirement savings with these strong dividend plays.

Stable investments that can fund your nest egg over the long haul can be difficult to track down, and finding ones that will pay you a solid dividend can be even more elusive. To help you find some of those companies, we asked a few Motley Fool writers for retirement stock ideas, and they came back with Tyson Foods (TSN 0.04%), Realty Income (O 1.48%), and American Tower (AMT 0.21%).

Each of these companies should provide a nice boost to your retirement portfolio while paying you regular dividends as well. Read on to find out how. 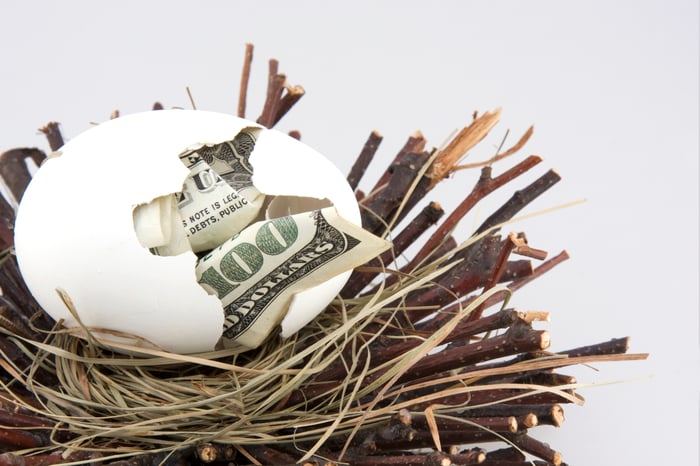 Maxx Chatsko (Tyson Foods): China recently announced tariffs on some 128 different products imported from the United States, but the total value was only about $3 billion per year. While that's pretty insignificant in the bigger picture of international trade, Wall Street considered it to be a significant detail for Tyson Foods. That's because one of the 128 products slapped with tariffs was pork, and the company produces 17% of America's total output.

Long story short, analysts are worried that lower pork exports to China could cause oversupply in the United States, which would lower selling prices. While that creates a potential obstacle for Tyson Foods, I think Wall Street is grossly overestimating the impacts on the business -- especially after sending shares of the $26 billion company 7% lower on the news. Why?

Of the four operating segments reported by Tyson Foods, pork is the smallest, representing just 16% of total operating income in the most recent quarter. It was the only segment that failed to grow revenue from the prior-year period. That's not to say it's unimportant, but it's unlikely to make or break the company's future.

Rather, Tyson Foods is focusing on the long-term global trend in increased protein consumption, of which pork plays a role, and the high-margin opportunities in prepared foods, which delivered a record operating margin in the most recent quarter. The company is well positioned to continue delivering growth and creating shareholder value, as evidenced by full-year fiscal 2018 guidance that calls for 23% to 26% earnings per share (EPS) growth compared to last year. That bodes well for Tyson's ability to grow its dividend yield from 1.7% today over the long haul. With its shares down 15% year to date, opportunistic investors should consider pouncing.

A great place for monthly income

Dan Caplinger (Realty Income): Real estate is a great investment for producing reliable flows of income, and Realty Income has a long history of helping investors draw income from real estate holdings. As a real estate investment trust (REIT), Realty Income invests in a wide variety of rental properties that it leases out to largely retail clients. In order to avoid some of the headwinds that the retail industry is facing right now, however, Realty Income has focused largely on the more stable end of the spectrum, catering to companies like drugstore chains, fitness clubs, warehouse retailers, and providers of consumer services that never go out of demand.

That's been a winning strategy, and the REIT's monthly distributions to its shareholders have grown steadily for two decades. Realty Income currently has a dividend yield of more than 5.25%, and even though real estate investments have been under pressure lately, the decline that Realty Income shares have seen is less extensive than some of its peers. Higher interest rates could pose a short-term threat to the REIT, but the company has endured rising-rate environments before without suffering too much long-term damage. For those seeking to build up a healthy nest egg with dividend income, Realty Income is worth a closer look.

Connect you to a better retirement

Chris Neiger (American Tower): Wireless data usage is expected to grow at a compound annual growth rate of 25% to 30% over the next five years. Why does that matter? Because American Tower owns more than 150,000 cellphone towers across the globe that are transmitting much of that data and is well positioned to grow along with the increased usage.

The company owns tower sites and rents out the space to wireless carriers, often several at a time, using long-term lease agreements. This allows American Tower to earn 99% of its top line from recurring revenue and gives the company plenty of stability. Sales jumped by 10.7% year over year in the most recent quarter, and because American Tower is a real estate investment trust (REIT), the majority of its net income is paid out as dividends.

American Tower should continue to benefit from new wireless innovations coming down the pipeline, most notably 5G. The faster connections will not only increase data traffic, but should also bring more devices online -- through the Internet of Things -- and that should increase the need for more cell towers worldwide. The company pays a respectable 2.1% dividend yield right now, and its shares have managed to outpace the market over the past 12 months, five years, and even the last decade. Investors looking for a great dividend play that's still growing should keep American Tower on their radar.