Variable order flow, an ongoing digital transition, and steel tariffs were among the topics executives emphasized during the company's most recent earnings call.

An expanding global economy has provided amenable growth conditions for the biggest of high-end interior furnishings companies in the last few years. Recently, I discussed key points made by office furniture giant Steelcase's management during its recent quarterly earnings conference call, which addressed both current and forward-looking business conditions. Let's follow this up by reviewing important observations Herman Miller Inc.'s (MLKN 3.98%) management team offered during its own March 21 conference call, which followed the release of its of fiscal third-quarter 2018 earnings. Below, I've provided three significant quotes from Herman Miller's CEO, Brian Walker, along with the context behind each observation.

Within our North American segment, the demand pattern was less encouraging this quarter. Following a strong first half of fiscal year marked by above expectation order patterns, our result this quarter demonstrated inherently uneven, project-based demand pattern characteristic of our industry at large.

As a result, orders within our North American business fell below our expectations, particularly as we moved through the latter weeks of the quarter.

Herman Miller issued a generally positive earnings report to begin the second half of its fiscal 2018 year. Revenue rose more than 10% to $578.4 million versus the prior-year quarter, and total orders improved by 3.7%. Yet North America, the company's largest segment, witnessed a 5.7% decline in orders versus the third quarter of 2017. As Walker notes above, the North American work-related furnishings business is largely driven by corporate expansion and renovation projects, and the variability of project-driven revenue periodically crimps the company's results.

The dip in orders reduced the North American segment's backlog on a sequential basis, from $356.9 million at the end of the second quarter of fiscal 2018 to $341.7 million at the end of the third quarter. As North America provides roughly 55% of revenue each quarter, the diminished order flow is responsible for rather muted fourth-quarter total company revenue estimates.

At the midpoint of a forecast range of $590 million to $610 million, Herman Miller's fourth-quarter revenue will represent 4% growth over the fourth quarter of 2017. Walker mentioned that management remains optimistic on North America's long-term growth prospects, and that order flow would benefit from new product launches, especially in seating, over the next few quarters.

The second big objective is to shift our marketing investments within this business from physical to digital transformation. We are seeing faster growth online than we are in studios and we're going to move some of our investments toward the digital side. This will mean slowing our rate of new studio openings from the pace of openings over the past few years.

Since so much of work-related furnishings sales are project-driven, both in North America and ELA (the segment which includes Europe, Middle East, Africa, Latin America, and Asia Pacific), Herman Miller's design studios play an essential role in the company's revenue generation. But it appears that the company's evergreen, iconic core products, such as the Aeron and Eames chair series, are established enough that corporate customers feel comfortable bypassing some of the traditional studio visit time and simply placing online orders for small projects. This trend has been facilitated by upgraded digital project planning tools such as material customization and 3D product visualization.

Management is undoubtedly also shifting resources from physical to digital spaces due to success in its small but rapidly growing consumer segment. This division, which includes sales to third-party retail distributors as well as direct-to-consumer e-commerce sales, expanded revenue by nearly 19% last quarter, to $86.8 million. The consumer segment comprises about 14% of total company revenue, and it's an area management is keen to exploit: An increasing base of digital orders will help lift company margins over the long run.

As for Walker's comment that this is the company's "second big objective," the quote above occurs within a discussion of four strategic priorities: margin improvement, digital transformation, a focus on customer lifestyles as a means to selling products, and a widening of Herman Miller's potential customer base. 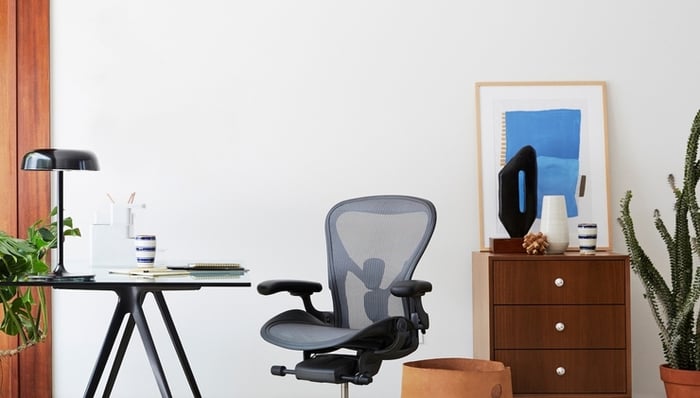 The recently announced plan for U.S. tariffs on imported steel and aluminum and the potential response from other nations is a new development. We are actively developing contingency plans to help navigate this environment. While we do not import any raw steel into North America, we have not been surprised to see the recent increases in domestic steel prices in response to potential tariffs on imported steel.

As with Steelcase's earnings call, which occurred on the same day, Herman Miller's management discussed possible impacts of the Trump administration's tariffs on steel imports, announced in January. According to Herman Miller CFO Jeff Stutz, the impact of higher steel prices at present is projected as a $1 million year-over-year increase on the company's commodity costs, though it's still very early to gauge the tariffs' ultimate effect on steel prices over the longer term. Stutz also noted that commodity prices in general have ticked up recently, which will dampen some of the anticipated cost savings from the company's productivity initiatives.

On the call, Herman Miller's management seemed optimistic that anticipated sales leverage from stronger volumes, as well as higher-margin sales in the consumer channel, will provide some insulation from the variability of steel and other commodity production inputs. Both Walker and Stutz asserted that the trend for both gross margin and operating margin should remain positive in the coming quarters.

For shareholders worried about steel tariff effects, it may help to put Herman Miller's projected increases in context. A $1 million rise in steel costs as currently estimated is tiny in relation to the company's annual cost of goods sold, which hit $1.4 billion last year. At the moment, the tariffs represent a minor headache for Herman Miller. Nonetheless, investors should keep an eye on this issue through the next few reporting periods.