Good news, auto investors! U.S. light-vehicle deliveries kicked off the critical spring selling season with a 6.4% surge higher in March, compared to the prior year, topping estimates and notching the industry's largest year-over-year gain since February of 2016. It was a breath of fresh air for investors and analysts already accustomed to plateauing sales in the lucrative U.S. market. Beyond the industry's gains last month, there were some important developments for Fiat Chrysler Automotive (NYSE:FCAU), Ford Motor Company (NYSE:F), and General Motors (NYSE:GM).

Rewind to a few years ago, when FCA was posting double-digit sales gains every month, and it was Jeep powering those gains. Unfortunately, when sales of Jeep stagnated, there was no brand to pick up the slack. The good news for FCA investors, as Jeep is a very profitable brand, is that Jeep sales are back, with a 45% increase in deliveries last month powering total FCA sales to snap out of an 18-month losing streak. 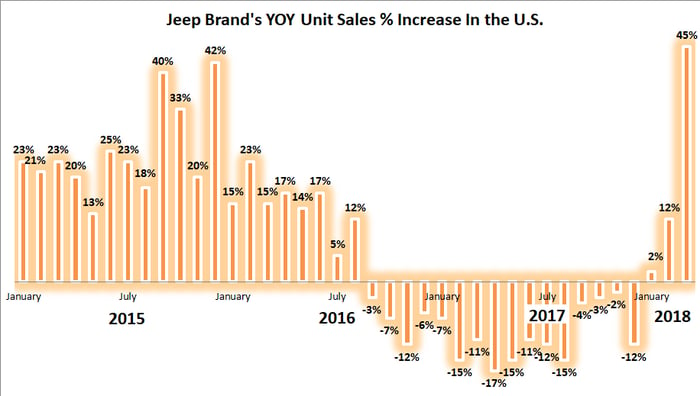 The Jeep Wrangler posted an eye-popping 70% sales gain to 27,829 units, which annihilated the previous monthly high of 22,615 set in May 2015. Jeep's Cherokee also had a solid March with a 63% sales increase to 23,764, good enough for its best March result ever. It was a seriously impressive March for the SUV brand as Jeep notched nearly 100,000 units delivered, a result good enough for its best month ever. Further, in large part thanks to its SUV sales, FCA was able to record more retail sales to consumers -- retail figures don't include fleet sales, which are added in total sales volume -- than its Detroit competitor Ford, an unusual achievement for FCA.

While Jeep's surge helped FCA post strong gains, Ford's bread-and-butter product, the F-Series, also recorded an excellent start to spring. F-Series notched its 11th consecutive month of gains in March, with sales topping 87,000 units -- historically, anything over 50,000 units is a solid month. Last month was the F-Series' best March performance since 2000, and the good news didn't end with its sales volume, either.

Average transaction pricing jumped $1,700 per truck, compared to the prior year, up to a staggering $46,800 per truck. Consumers continued to opt for higher-trim level trucks that are packed with more technology, options, and features, creating a more profitable scenario for Detroit's second-largest automaker. The surging price tags for Ford's F-Series lineup helped push overall transaction prices to $36,300, higher than any full-line automaker. Those average prices were a large $1,400 over the prior year, and roughly twice the industry's average gain of $700. It's no secret that Ford's bread-and-butter F-Series hauls a majority of the company's automotive profits, and as volume and average pricing continues to rise, it's great news even as industry sales plateau in the U.S. market.

Success across the board

The story with Detroit's largest automaker, General Motors, might be that everything looked strong last month. The company's total deliveries jumped 16%, compared to the prior year, driven by multiple brands and a 14% surge in retail sales -- reassuring investors it wasn't a spike in historically less profitable fleet sales that boosted sales data last month.

Beyond its sales success last month, J.D. Power Customer Service Index (CSI) Study for 2018 ranked Buick the highest in satisfaction for dealer service among mass-market brands for the second consecutive year. Not to be outdone, Chevrolet tied for second place, followed by GMC, while Cadillac placed in the top three for luxury brands.

While this was certainly a better-than-expected month for Detroit automakers, and the industry overall, investors would be wise to temper expectations going forward. There was an extra selling day last month compared to the prior year, inflating some sales gain percentages, and after years of aggressive leasing by automakers, there are millions of off-lease vehicles coming to market that will provide compelling substitute products for consumers shopping for a vehicle. March was strong for the industry, but don't expect the trend to continue throughout 2018.