In 2017, Activision Blizzard (NASDAQ:ATVI) generated 56% of its total revenue from in-game spending, which includes the sale of expansion updates to existing games and cosmetic items gamers purchase while playing. Growing in-game revenue is a primary focus of the company, since it generates higher margins than new game sales and supports a recurring stream of revenue that comes in year-round.

With the launch of Overwatch League -- a professional e-sport based on the Overwatch game -- Activision is entering a new phase of its strategy to offer broader entertainment experiences in order to increase audience reach, increase time spent in games, and keep digital in-game revenue growing over the long term.

Overwatch League is creating additional excitement around the game

Overwatch League matches are scheduled every week from Wednesday through Saturday and can be watched on Twitch or the Overwatch League website. So far, these matches have been generating 280,000 average views each day, and the average watch time has been more than an hour each night.

Blizzard has blended the viewing experience of Overwatch League into the game itself, which naturally boosts engagement (both of time and money). While some players never spend a dime on in-game content, enough of them do to make this a growing and very profitable revenue stream for the company.

On the company's fourth-quarter conference call, the head of Blizzard Entertainment, Michael Morhaime, reported that "the Overwatch League has driven a ton of buzz and awareness for the game." He added, "As that increases, our players have new ways to customize their playing experience with in-game digital skins as well as physical merchandise, and we've seen our players respond well to both of those."

So far, Overwatch League has met or exceeded management's expectations for the reasons Morhaime pointed out. In the short-term, they are focused on growing the audience of Overwatch League in order to increase the game's popularity. One of the benefits of doing that is creating greater demand for in-game content.

Underpinning the growth of in-game revenue is the fact that any extra content also makes the game more fun to play with fresh features, options for customization, and a strong social component to the gameplay.

All of these elements come together to drive higher engagement and higher player investment in the game. This is why the growth of Overwatch League, and potentially other e-sport leagues the company may launch in the future, could be enormously impactful going forward. 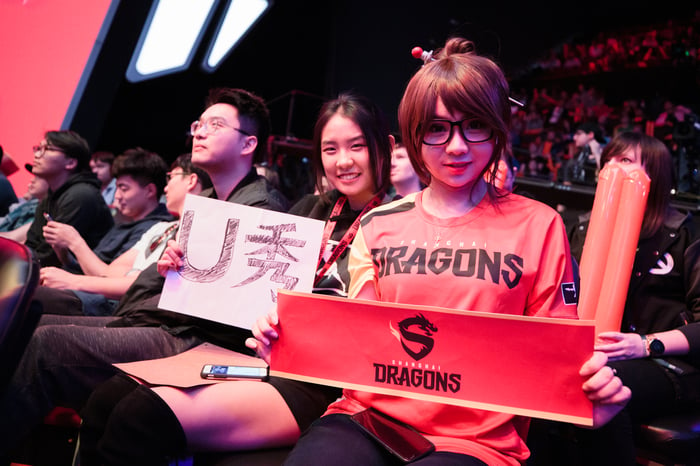 One of the unique aspects of Overwatch League, as a first-person shooter, is its appeal to different demographics around the world. IMAGE SOURCE: ACTIVISION BLIZZARD.

Even more ways for players to spend money

Beyond gaming, the company is shifting its focus to making its titles the centerpiece of a broader entertainment package. Before Overwatch League launched in January, players were spending an average of 50 minutes per day across Activision's games over the past two quarters. That's already on par with how much time people spend on social media.

And this is just the beginning. Hearthstone, a digital card game made by Blizzard, could have bigger e-sports potential than even Overwatch. Hearthstone's player base numbers 70 million, as of May 2017 -- double the size of Overwatch -- and generates more views on Twitch than any other title by the company.

As Activision grows the audience for Overwatch League and prepares to launch additional e-sport leagues, it's offering a "whole new avenue for players to express their passion for Overwatch" and other games.

Those efforts will combine with broader entertainment experiences like consumer products, movies, comic books, and other media to boost engagement -- and the top line -- over the long term.