Synaptics (NASDAQ:SYNA) reportedly bought its way into Apple's (NASDAQ:AAPL) supply chain ecosystem by acquiring Renesas SP Drivers in a $475 million deal four years ago. Renesas was the sole supplier of display chips for iPhones at that time, and Synaptics didn't want to miss out, reportedly outbidding Apple to score the deal.

However, speculation that Synaptics' iPhone business is at risk has been making the rounds since last year after Apple gave U.K.-based chip designer Imagination Technologies the boot. Apple has been bringing production in-house and investors worry about that will be bad news for suppliers. 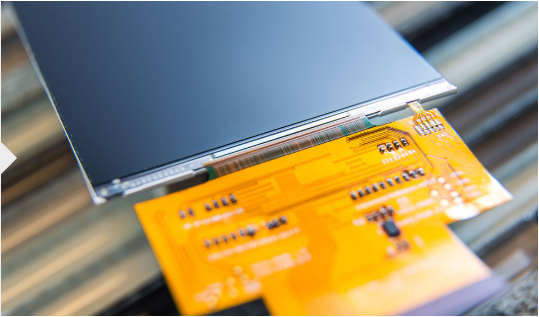 What's Apple up to?

Bloomberg reported in mid-March that Apple has started the design and production of its own displays at a "secret" facility near its headquarters in California. The smartphone giant is reportedly initially making small numbers of screens as a part of a pilot project, paving the way for the development of the next-generation MicroLED displays.

These MicroLED displays are expected to be better than OLED screens, and could possibly allow Apple to make slimmer iPhones with brighter displays and a longer battery life. Not surprisingly, shares of display makers such as Universal Display fell after the revelation about the secret factory, and investors in other companies that supply technology to Apple -- including Synaptics -- also got antsy.

Synaptics is believed to supply the display drivers used in iPhone 8 models, which use liquid crystal displays (LCD), as opposed to the iPhone X's OLED screens. But will Apple's decision of going in-house and making its own display drivers really hurt Synaptics in the long run?

Synaptics is much more than Apple

Assuming that Apple is one of those two customers, it cannot be denied that Synaptics will take a substantial hit to its top line if Apple buys less from it. And revenue already dropped almost 7% year over year last quarter.

But investors should look past any potential short-term weakness caused by any loss of Apple business as Synaptics is sitting on huge opportunities. For some perspective, let's take a look at how Synaptics' top-line performance the past couple of years: 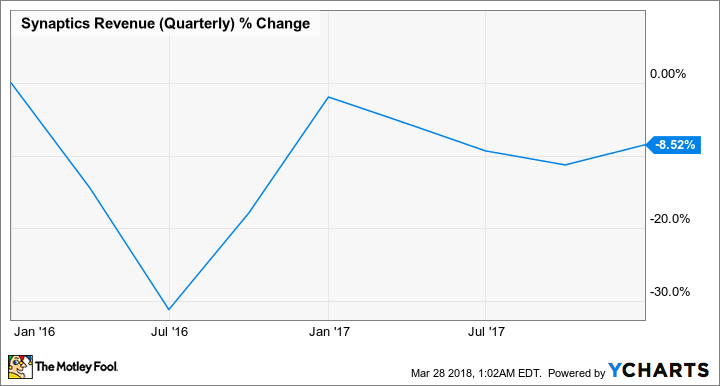 Clearly, the company's revenue has been rebounding, and this has happened along with diversification of the client base. Synaptics looks capable of overcoming any potential loss at Apple thanks to its presence in areas such as the Internet of Things (IoT).

Synaptics recently created a new business segment known as consumer IoT. Revenue from this segment came in at $106.9 million last quarter, accounting for almost a quarter of total sales. More importantly, revenue from Synaptics' newly introduced IoT products came in at $81.6 million last quarter, thanks to the company's recent acquisition of Conexant.

The Conexant acquisition has given Synaptics access to the fast-growing virtual assistant market as the latter supplies audio development kits to OEMs (original equipment manufacturers) looking to integrate Amazon's Alexa into their smart speakers. The good part: the acquisition is already proving to be lucrative for Synaptics as the company recently scored a deal with Harman to power the latter's smart-speaker family.

Synaptics' move into the smart-speaker market could be a big deal for the company in the long run as this space is estimated to grow at an annual rate of 34% through 2023 and Amazon is the current leader.

Meanwhile, Synaptics' mobile prospects aren't limited to just Apple. Earlier this year, Synaptics revealed that it has begun mass production of its in-display fingerprint sensing technology, and one of the top five smartphone vendors in the world is already using it. In March, Chinese smartphone OEM Vivo revealed that its X21 smartphone is using the Synaptics FS9500 chip, allowing users to unlock the device by touching the screen instead of a physical button.

As a result, Synaptics is the first chipmaker to mass produce an in-display fingerprint technology for smartphones that will allow OEMs to get rid of a button on the display. What's more, Synaptics' early move into this market opens up a huge long-term opportunity. According to IHS Markit, demand for chips that integrate touch and display drivers into a single platform will jump to 654 million units in 2022 as compared to 100 million units last year.

So, Synaptics is pulling the right strings that should help it mitigate loss of any Apple business. Additionally, Apple's new display technology is still not a sure thing as Cupertino could reportedly take three to five years to commercially deploy it and, by then, there might be a new technology on the market.

Synaptics investors shouldn't worry as the company's business from Apple isn't going away anytime soon. And, if it does lose the Apple account, its progress in IoT and the broader smartphone industry would help it stay afloat.