If you're an investor in consumer goods giant Unilever (OTC:UN), odds are you followed the takeover bid from Kraft Heinz (NASDAQ: KHC) closely in 2017. Ultimately, it fell through, with Unilever's management rebutting that it was better off on its own. There was some mustard left on the face of Kraft Heinz, but major shareholder Warren Buffett claimed there was potentially a misunderstanding of the nature of the offer. It was not intended to be a hostile takeover, he said, but it could have been perceived that way by Unilever.

Nearly a year has passed, and there are no signs of reconciling differences. However, for Unilever shareholders, reflecting on the motives of the deal provides valuable insight into the company. Warren Buffett and Kraft Heinz no doubt had a list of reasons to pursue Unilever. But I expect there's one metric above all else that caught their eye.

It boils down to this

Over the years, Buffett has made it clear he loves name-brand companies, simple-to-understand businesses, and clear visibility into the future of the businesses he buys. But there's one thing that he appreciates more than all of those, and that's high returns on invested capital.

Also referred to as ROIC, return on invested capital rolls off the tongue less casually, but it's not rocket science to understand. Basically, a business is only prosperous over the long haul if it can reinvest money (earnings) at a rate of return that exceeds the cost of raising that money. 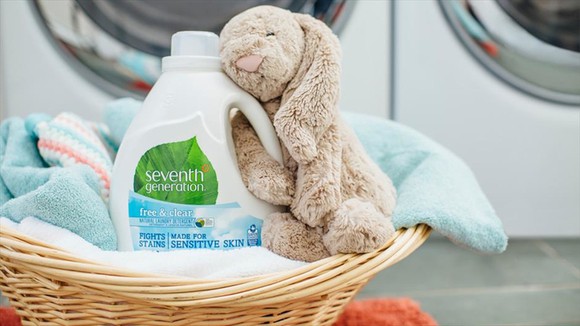 The equation might be simple, but the task of finding high ROIC projects is not for many companies. So when Buffett identifies those companies that consistently generate returns in excess of their cost of capital, he springs into action. This, in large part, explains his interest in Unilever last year. Sure, he may appreciate its brands -- from Dove to Seventh Generation -- but it's the company's historical track record of generating juicy returns on invested capital that really got him salivating. Let's take a closer look.

Unilever clears the hurdle...time and again

When you look at a large company like Unilever, the cost of capital is typically low. Cost of capital refers to the company's cost of raising capital -- through debt or equity -- from outside investors, i.e.lenders or shareholders. Given Unilever's size of $158 billion in market cap and its strong balance sheet (its current debt-to-equity ratio is 1.18), outside investors are willing to provide capital at a relatively low cost. As of this writing, the estimate from GuruFocus shows that Unilever's cost of capital is 6.9%.

So, Unilever's task is to jump over that hurdle by allocating money to projects that will generate greater than 6.9%. That's what a savvy investor like Buffett wants to see. And Unilever has done just that in recent years. As shown in the following chart, Unilever's ROIC of 18.5% well exceeds its estimated 6.9% cost of capital. 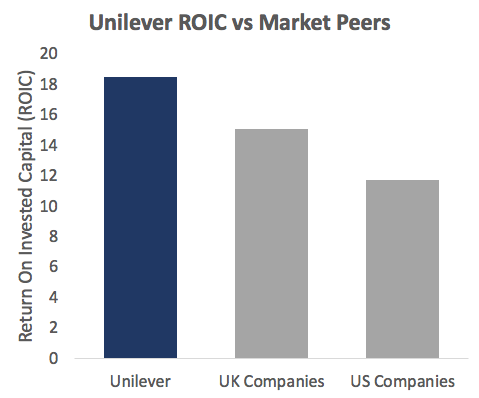 There are two more important takeaways from this. First off, Unilever not only exceeds its cost of capital significantly, but outperforms the comparative market of U.S. and U.K. companies in terms of ROIC. It has a 22.6% edge over the UK and a 57.8% edge over the rest of the total U.S. market.

Second, Unilever's proven it can consistently achieve these high rates of return. Here's a look at how the company's 2017 ROIC compares with its 5- and 10-year track-record:

Why you should pay close attention to this metric

The philosopher Will Durant once said, "Excellence ... is not an act, but a habit."

In this case, Unilever has made a habit of consistently producing a high return on invested capital, much to the delight of its lenders and shareholders (its stock increased 25% in 2017). Buffett and Kraft Heinz recognized this attribute and attempted to pounce on the opportunity to purchase a high-quality business.

The stock wasn't cheap either: Unilever shares traded at 26.3 times earnings. But Buffett recognized that high-quality companies can be worth the premium. The key is to be able to identify quality, and one of the best ways to do that is to focus on the metric of return on invested capital.