The new electric SUV isn't just a Tesla competitor -- it’s also going to be part of the self-driving car race.

Alphabet's (GOOG 0.02%) (GOOGL -0.01%) autonomous car division, Waymo, recently signed a contract to add Jaguar's first all-electric car to its fleet of self-driving vehicles. For the Google parent company, the deal will be a blip on its path to driving automation, albeit an exciting one. For shareholders of Jaguar parent Tata Motors (TTM -1.15%), it's an early sign the new vehicle will be a winner for the automaker.

Hot on the heels of Jaguar's official unveiling of the I-PACE, the company announced alongside Waymo that up to 20,000 I-PACEs will join the Waymo fleet through 2020. The cars will become the world's first fully autonomous premium electric vehicle, able to service the up to 1 million trips being requested each day, Waymo says. The Waymo I-PACE will begin testing on the road later in 2018.

Waymo CEO John Krafcik said, "While we've been focused at Waymo on building the world's most experienced driver, the team at Jaguar Land Rover has developed an all-new battery-electric platform that looks to set a new standard in safety, design and capability. We're sure Waymo riders will enjoy the safe, premium and delightful experience that the self-driving I-PACE will provide." 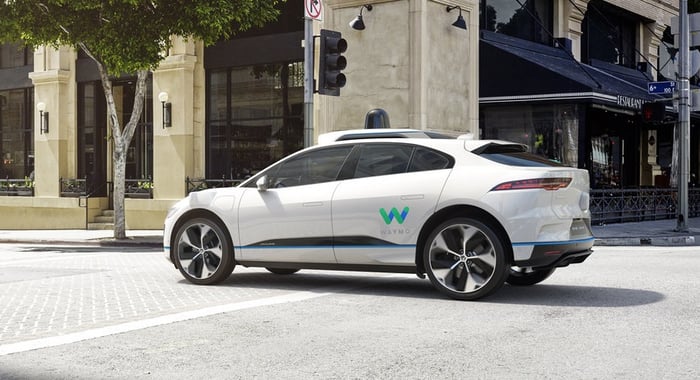 A new I-PACE in the Waymo fleet. Image source: Waymo.

Why the I-PACE matters

At the moment, Jaguar's new SUV is Tesla's (TSLA -1.11%) only real competitor. Tesla delivered just over 100,000 vehicles last year, but Jaguar could close in on that number fast. An order for 20,000 I-PACEs, before the car has even started rolling off of showroom floors, is a good start.

The I-PACE is just the beginning, though. Jaguar Land Rover said every model vehicle it makes will have an electrified version by 2020. Having sold over 620,000 vehicles in 2017, that could make the British automaker the leader in electric vehicles in short order.

JLR is coming off its best year ever for vehicle sales, and through the first quarter of 2018, those sales are being matched. The I-PACE and the other new electrified models being planned will be key to pushing the company's sales figures even higher in the years ahead.

That makes JLR a great potential growth story, but there could be a drawback for some investors. To own the British automaker, one must purchase shares of Indian automaker Tata Motors, which bought JLR back in 2008. Tata Motors, which makes affordable cars primarily for India and other emerging markets in Asia, has had its struggles over the years, with sales fluctuating wildly. The company has been showing renewed signs of life, though, with vehicles sold in its current fiscal year up 18% year over year.

On the flip side, investors who want in on Waymo can buy Alphabet stock, which is buoyed by the highly profitable Google enterprise. Autonomous driving may be a ways off from having an impact on Google's bottom line. In the fourth quarter of 2017, Google's operating income was $8.8 billion compared to a $916 million loss for the company's "Other Bets" segment, which includes Waymo. Still, getting in on autonomous driving without the extra risk because of Google isn't the worst thing ever.

The 20,000 I-PACEs headed to Waymo by themselves won't make investors money. Both businesses are too big for those car sales to make much impact on the bottom line. However, it's a step forward for vehicle electrification and automation, and Waymo and Jaguar Land Rover are shaping up to be leaders in both departments. For investors looking for a way to bet on the future of driving, with a little built-in diversification, shares of Alphabet and Tata Motors may be a good place to start.