After being stuck in a rut for months, shares of Tata Motors (NYSE:TTM) made a move this month -- but not in the direction investors wanted. Business in India has been tough this year, and subsidiary automaker Jaguar Land Rover (JLR) sees its business cooling off a bit. Sales of vehicles at the iconic British automaker have slowed down this year as the company is trying to lap what was a banner year in 2016. New models like the F-PACE, Jaguar's first foray into SUVs, provided a huge jump in year-over-year sales.

JLR continues to post solid numbers internationally as demand continues to ramp up so far this summer, but a drop in sales in the U.S. has tempered those numbers a bit. The company sees incentives in North America dragging on profits in the quarters ahead as automakers begin to fight for fewer customers.

Nevertheless, the company has generated a lot of buzz around the world and has been resilient in spite of North America (which currently makes up about 20% of its total business). On the back of a strong year of new model releases, JLR will be following it up in 2018 with another strong pipeline. A second SUV, this time a compact one called the E-PACE, will be rolling out early next year.

Grabbing even more attention, though, is a first legit contender against Tesla's Model X electric high-performance SUV. Dubbed the I-PACE, the vehicle is set to debut in 2018, says Jaguar. Along the way, Land Rover has a couple of new SUVs and Jaguar a sport wagon to entice luxury vehicle enthusiasts. 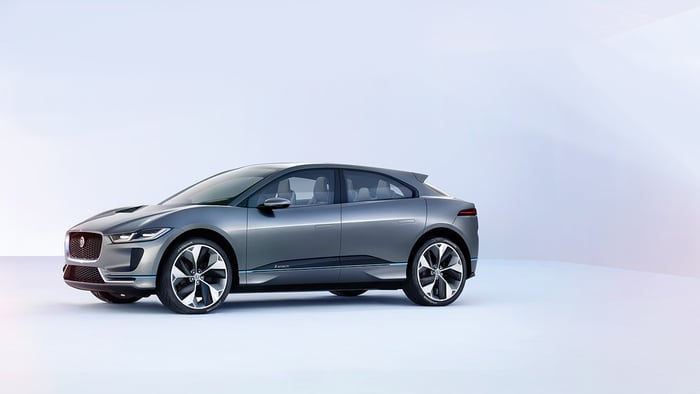 But what's the deal with India?

JLR is grinding higher, but recent changes in India have been a short-term drag. Given the slowdown at JLR, investors have decided to get pessimistic on the global automaker stock.

Sales of cars to consumers are up in spite of India's controversial demonetization policy late last year, when the government sprung a surprise crackdown on 80% of the country's bills in a bid to weed out counterfeit currency. However, bigger-ticket items such as infrastructure, municipal, and defense buses and trucks are down and more than offset strength in consumer sales.

In addition to the demonetization -- which families and businesses alike are expected to continue recovering from through the end of this year -- automakers in India are also dealing with changes to emission standards for commercial vehicles and adjusting to a new goods and services tax. Four months into the fiscal year (Tata's year begins in April) and total sales are at 155,901 units, a 6.6% drop from the first quarter last year.

The good news is that India's economy continues to be a leader in emerging markets, with better than 7% GDP growth in the next two years. And in spite of the recent shakeups, the government continues to invest in infrastructure to support the fast-growing economy. Early signs indicate that automakers there may be on the mend.

Tata Motors' stock got a big boost from the epic performance JLR turned in last year. However, with growth expected to slow from its luxury subsidiary, the Indian operation may need to start pulling some weight if the stock is to rebound from its recent fall. 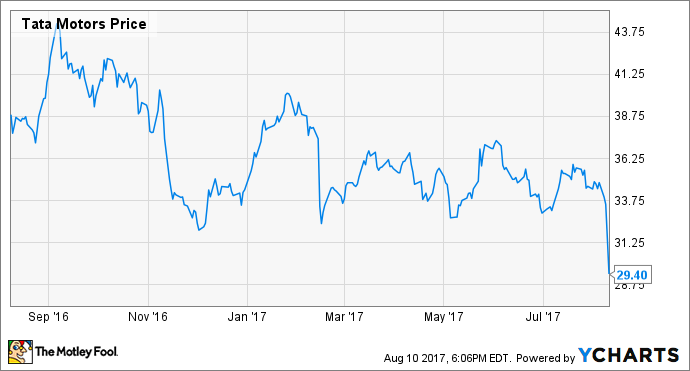 The good news here is that, while JLR is taking a breather, the company has a strong pipeline in the works that management thinks will help sales continue to expand globally. The Indian operation, fraught with political disruption lately, still operates in one of the world's fastest-growing economies. Those two positives could provide a new tailwind for the stock once investors' nerves calm down a bit.