Please ensure Javascript is enabled for purposes of website accessibility
Log In Help Join The Motley Fool
Free Article Join Over 1 Million Premium Members And Get More In-Depth Stock Guidance and Research
By Nicholas Rossolillo - Apr 12, 2017 at 10:41AM

India's largest automaker keeps growing in spite of worrisome news on the political front. Here's why investors should ignore the noise.

Tata Motors (TTM 3.05%) and its subsidiary Jaguar Land Rover are both shaking off worry after worry. Last year's comparable figures were going to be tough to beat, as new model releases and an increase in Indian government spending sent sales through the roof. However, the company is posting higher results anyway, and recently announced a new joint development project with Volkswagen (VWAGY 2.75%) that could help boost business further. 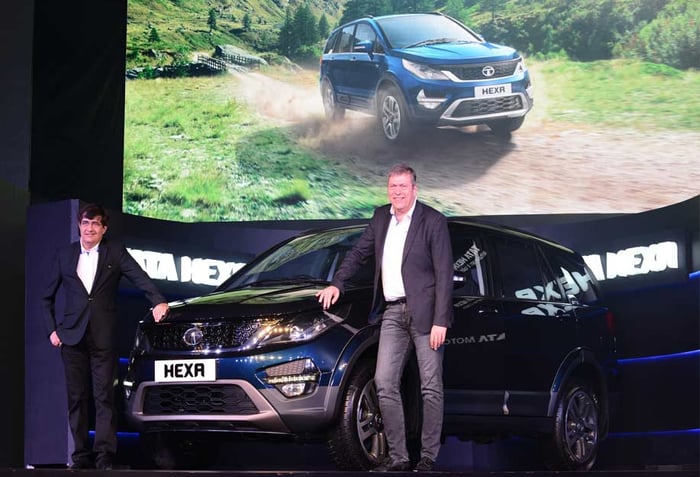 Tata Motors and its subsidiary have overcome several issues that disrupted potential. For Jaguar Land Rover, the U.K.'s decision to leave the European Union set off doubt. Following the vote for Brexit, many mainland Europeans threatened to boycott British goods and services, the iconic auto brands included.

Europe is a major buyer of both brands. In the company's last fiscal year, Europe accounted for 24% of worldwide Jaguar Land Rover sales. So far this fiscal year, that number has only dropped slightly to 23%. Brexit could still be a major factor down the road, as a trade agreement may not happen until after the U.K. officially leaves in 2019. However, the automaker is proving resilient in spite of the looming event.

India's new demonetization policy was the other major political headwind that arose recently. In a surprise announcement in November, to help fight black-market activities, the government ordered that 500- and 1,000-rupee notes be brought in to banks and replaced. Since much of India's economy is based on cash, the move stung the local economy, especially small businesses and families. For comparison, imagine what would happen if $1 bills were suddenly taken out of circulation in the United States.

The country's world-best growth, topping 7% the last couple of years, took a temporary but big step back in the fourth quarter as it fell to 6.2%. The economy is rebounding, though, as the government continues to increase spending on infrastructure and modernization. India is expected to return to better than 7% growth this year and next, and Tata's sales figures have continued on an upward trajectory.

Sales firing on all cylinders

As a result of the political worry, Tata and Jaguar Land Rover both hit some speed bumps around the start of the new year. That quickly changed, though. For Jaguar Land Rover, sales of last year's new-product launches including the all-new F-PACE SUV continued at a strong rate. Total sales hit a best-ever record for February, increasing more than 9% over last year's best-ever February.

The company's Indian business was hit when commercial and industrial vehicle sales fell because of demonetization. However, Indian consumers have more than made up the difference, as Tata's new-vehicle launches have done well. Exports also continued their uptrend, up 11% for the fiscal year. Total cumulative sales are up 6% compared to last year. 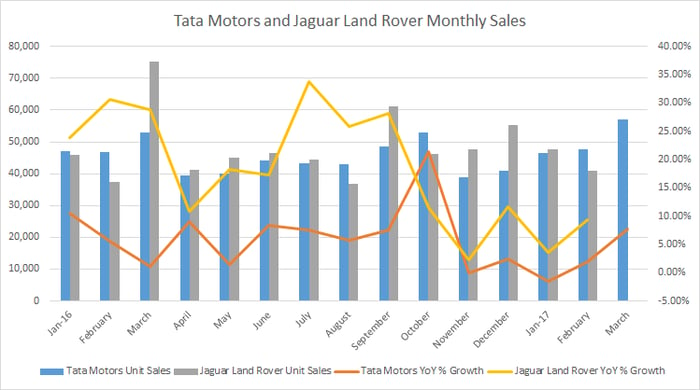 Comparable sales could get tougher later in 2017, especially in the fourth quarter, when in 2016 Tata and Jaguar Land Rover were posting record sales figures.

More noise also came up on March 29 when the Indian Supreme Court decided to halt all sales and production in the country of vehicles that were made based on old emissions standards, effective April 1. It's a blow to automakers and dealers with old inventory on the books, but Tata's current lineup is already compliant with the new emissions standards. How the decision will affect inventory remains to be seen.

More important news, though, came earlier in March when Tata and Volkswagen said they were teaming up for new auto development. The deal could help both automakers make headway in India, which is expected to become the world's third-largest car market behind the U.S. and China in another two years. New products from the partnership are expected to arrive around the same time.

It can be easy to get distracted by noise, but Tata Motors demonstrates why investors should tune it out and focus on company fundamentals. A great business will find a way to grow even when economic and political environments get tough.