A filing with the FCC reveals Snap is planning a new version of Spectacles.

When Snap changed its name from Snapchat, it did so in conjunction with the release of Spectacles, its camera-sunglasses hybrid. Spectacles indicated the company had ambitions beyond building a social network, wanting to build an ecosystem of products that all work together and increase engagement.

Spectacles were initially extremely popular, driven by artificial scarcity and clever marketing. But when Snap tried to scale the product, sales didn't live up to expectations. Snap ultimately had to write down $39.9 million in inventory and commitments.

But its past missteps aren't stopping Snap from trying again. The company filed documents with the Federal Communications Commission earlier this year for a new "wearable video camera" described as "Spectacles" and "Model 002." The documents were first reported by Variety.

There's not much reason to believe Snap's second attempt at Spectacles will fare better than the original, but investors are rewarding the company anyway, sending the stock price up after the news broke. 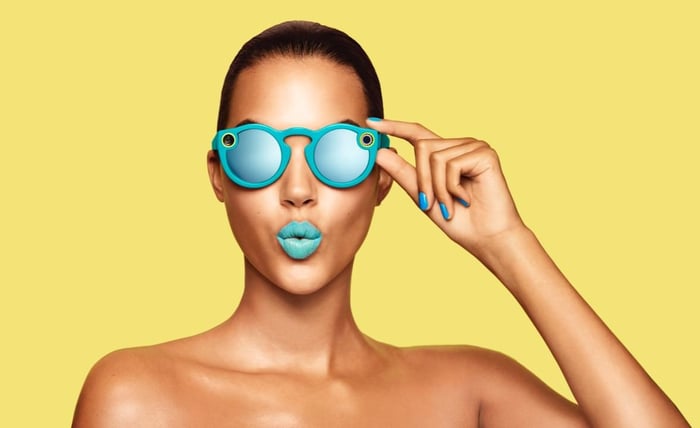 What's new this time around?

The FCC filing is light on details, and a lot of it has been redacted so competition can't steal Snap's ideas, a problem it faces in its software business. But Snap will include a better Wi-Fi chip to make faster connections. Snap also says it will include the required FCC regulatory label in the Snapchat app instead of printing it on the frames, so it could provide a sleeker design. The company is also reportedly planning to make Model 002 water-resistant, according to a report by Cheddar's Alex Heath.

But beyond a few hardware upgrades and a more stylish design, the core functionality of Spectacles isn't likely to change very much. It's still just a way to capture moments as they happen, by having a camera that's easily within reach at all times.

Snap can, however, avoid the pitfalls that led to its $40 million write-down last year. It can make sure it doesn't try to scale if the demand isn't actually there. Still, it's unclear how profitable Spectacles sales can be.

What's more, those sales won't have a huge impact on Snap's top line. In the first half of last year, the company reported about $13.5 million in Spectacles sales. By comparison, Snap reported $332 million in total revenue, and ad revenue is growing quickly; analysts expect total revenue to reach $1.3 billion this year.

So why are investors excited?

While Model 002 might not be something to get excited about for its own sake, the move to keep iterating on its hardware ambitions could be. Heath reported that Snap is already working on a third version of Spectacles, which uses two lenses to produce 3D effects, similar to Snap's recent update on the iPhone X using ARKit. It could ultimately produce a version of Spectacles that uses augmented reality technology to overlay graphics on the lenses themselves, providing anything from cool graphics to relevant information like real-time translations right on a user's eyes.

If Snap can make a hit piece of hardware, it can solve one of its biggest issues -- every new feature in its app is readily copied by competitors, particularly Facebook (META 1.21%). Facebook has been ruthlessly copying Snapchat features such as Stories, Lenses, and SnapCodes (which lets you easily follow users using QR codes). It seems evident Instagram's introduction of Stories has had a negative impact on Snapchat's user growth.

But a piece of hardware that's directly integrated with Snapchat will be a lot harder to copy. What's more, the switching costs for users would be a lot higher. It's completely free to tell people on Snapchat to start following you on Instagram, and then start sharing more content on Instagram. But if Facebook copied Spectacles or some other hardware used to share content, it would be asking users to put their own money on the line.

That said, Snap has yet to prove it can make a hit piece of hardware, and its first attempt was far from encouraging. Either you believe Snap and CEO Evan Spiegel can bring a hardware product to market with mass appeal, or you don't. If you do, the news that a new Spectacles model is in the works should make you more confident in the stock. If you don't, then you'll also believe further investments in hardware are a waste of money for a company that's already producing huge losses.