A solid fourth-quarter report sparked glowing analyst responses, followed by buyout speculation on the back of a sector peer receiving a $6.5 billion acquisition offer.

Shares of MongoDB (MDB -2.71%) gained 34.7% in March of 2018, according to data from S&P Global Market Intelligence. The surge started with a solid fourth-quarter report from the database software vendor in the middle of the month. Analysts followed up with a plethora of rosy notes on MongoDB, and the stock also gained when another young cloud computing expert was acquired. 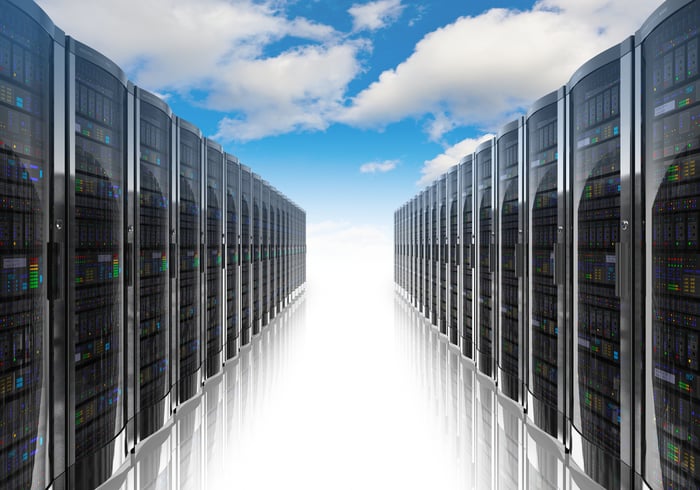 MongoDB's fourth-quarter sales grew 50% over the year-ago period, landing at $45 million. The company recorded a non-GAAP net loss of $0.40 per share, 9% better than the $0.44 loss per share in the fourth quarter of fiscal year 2017. Both of these figures landed ahead of Wall Street's consensus estimates, which called for a net loss of $0.43 per share on sales near $42 million.

Several analyst firms raised their price targets on MongoDB based on these results, typically stopping just above $40 per share. Their old targets clustered near the $34 mark. Before the earnings report, MongoDB shares traded at roughly $38. Now, they stand closer to $41.

Finally, the stock enjoyed a quick adrenaline kick when salesforce.com (CRM -0.49%) announced an acquisition of MuleSoft (MULE), another mid-cap company with tight connections to the cloud computing market. The deal sparked speculation that other companies in that category could see software giants kicking their tires soon enough, and that would presumably include MongoDB.

No buyout offer has materialized for MongoDB so far, but the company's sales are skyrocketing while the cash burn slowly inches closer to the breakeven point.

MongoDB's innovative NoSQL databases provide a flexible framework for modern businesses in the cloud, and some of the company's most obvious rivals are actually acting more like business partners at the moment. For example, Microsoft (MSFT -2.03%) not only supports MongoDB on its Azure cloud platform but has also launched a co-selling program to highlight the business value of that combination.

Teresa Kersten is an employee of LinkedIn and is a member of The Motley Fool's board of directors. LinkedIn is owned by Microsoft. Anders Bylund has no position in any of the stocks mentioned. The Motley Fool recommends MongoDB, MuleSoft, and Salesforce.com. The Motley Fool has a disclosure policy.