Please ensure Javascript is enabled for purposes of website accessibility
Log In Help Join The Motley Fool
Free Article Join Over 1 Million Premium Members And Get More In-Depth Stock Guidance and Research
By Reuben Gregg Brewer – Apr 13, 2018 at 6:08AM

Results are improving for these two high yield limited partnerships, but one has less baggage.

Both Ferrellgas Partners, L.P. (FGP) and Suburban Propane Partners, L.P. (SPH -4.29%) showed material improvement in their most recent quarters compared to the last couple of years. As the businesses of these two propane distribution partnerships recover from back-to-back warm winters, investors might be tempted to grab their over 10% yields. However, one of the pair has more on its plate than the other. Here's what you need to know.

Propane distributors make their money from delivering fuel, which is used primarily for heating. Commodity prices don't really come into the equation much for these companies because price fluctuations in fuel are passed onto the customer. What matters for distributors is the volume of fuel supplied. That was a problem over the last two fiscal years because warm weather led to reduced demand. 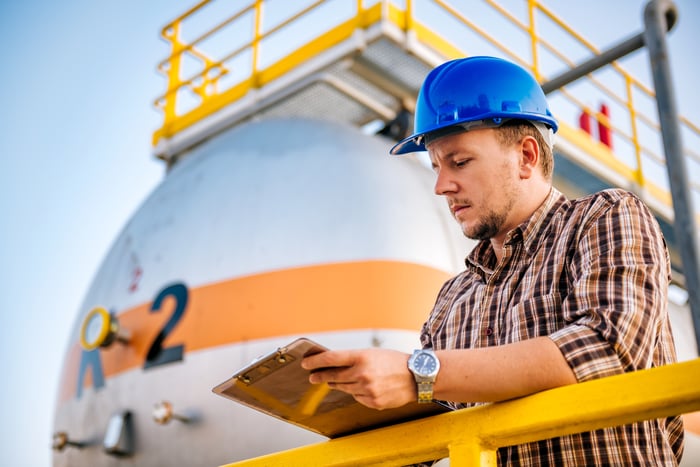 According to Suburban Propane CEO Michael Stivala, "Average temperatures (as measured by heating degree days) across all of the Partnership's service territories for fiscal 2017 were 15% warmer than normal and 2% cooler than the prior year." The partnership operates across the United States, so there was really nowhere to hide for any propane company.

However, as Stivala said in Suburban's first-quarter earnings report in February, the most recent winter was "more normal." Adjusted EBITDA was up 10% year over year, driven largely by a 5.4% increase in propane gallons sold. Ferrellgas reported similarly strong results for its fiscal second quarter in early March. The partnership saw a 15% year-over-year jump in adjusted EBITDA on a 16% increase in gallons sold.

Although no one can control the weather, if winters have finally returned to more-normal temperatures these two partnerships look like they will be able to execute on their key plans. That notably includes reducing leverage at both partnerships -- heavy debt loads forced each to trim distributions in recent years.

Plenty of work to be done

Ferrellgas, however, was able to reduce its long-term debt by nearly 10% in its most recent fiscal quarter, while Suburban's debt rose about 4%. Although the debt issues each of these partnerships face should keep all but the most aggressive investors on the sidelines, you can't read too much into the improvement at Ferrellgas. In fact, it actually highlights the bigger concerns facing that partnership. 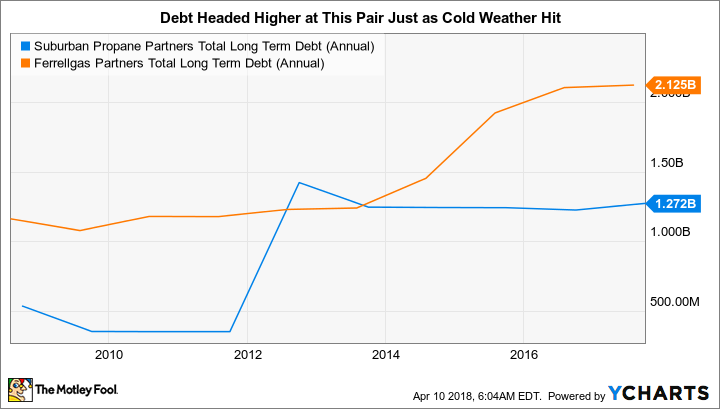 Both partnerships fueled their growth with debt-funded acquisitions, and two years of cold weather left the partnerships struggling under the load. However, Suburban's expansion efforts focused on the propane space, while Ferrellgas attempted to branch out into the midstream oil and natural gas space. Falling oil prices led to the loss of a key customer (and asset write-downs), and results in this new business fell well short of expectations. In fact, part of its debt reduction in the quarter was driven by the sale of a portion of the midstream operations it acquired.

That's good news, of course, and the partnership highlighted improving results in the midstream division when it reported earnings. But this business is, at this point, more of a distraction from its core propane business (roughly 70% of revenues) than a net benefit. I believe Ferrellgas will work its way back to financial health and eventually increase its distribution from the post-cut level of $0.10 a unit per quarter (it was previously $0.51). However, the added risk of dealing with the midstream business makes it a bad choice for all but the most aggressive investors.

Both Suburban Propane and Ferrellgas Partners are facing debt headwinds. The leverage they took on to expand led to distribution cuts in the face of warm winter weather over the last two years or so. Now that weather patterns are improving for now, both are starting to see improved results. But Ferrellgas' expansion efforts pushed it into a new business line that has also faced troubles, leaving it with two notable headwinds and not just one. For that reason more aggressive investors should prefer Suburban, though most investors should probably avoid the pair entirely for now.