The Pentagon is focused on building its hypersonic capability and keeping pace with Russia. Boeing has found a British startup that it believes can help.

The venture capital arm of Boeing (BA -3.39%) is backing a hypersonic engine maker amid growing interest in the technology from both Pentagon officials and U.S. rivals.

Boeing's Horizon X unit is joining with BAE Systems (BAES.Y -3.93%) and Rolls-Royce (RYCEY 3.83%) to provide $37.3 million in series B funding to Reaction Engines, a British firm working to develop a hybrid engine able to travel five times the speed of sound in atmosphere, and as fast as Mach 25 when traveling in space. 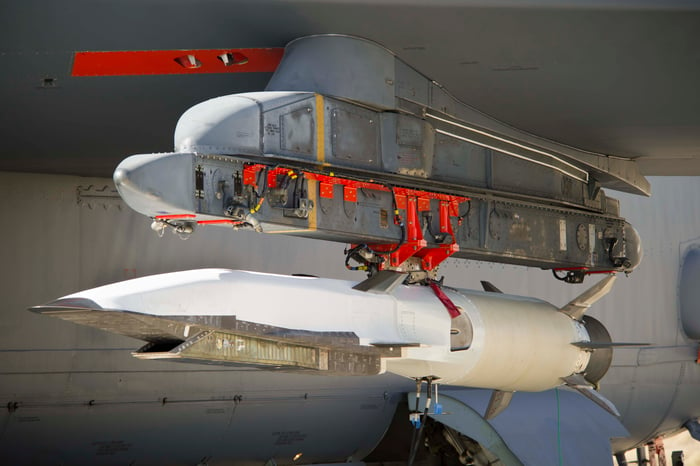 Boeing's X-51A Waverider, an early hypersonic experiment, mounted on the wing of a B-52 bomber awaiting a test flight. Image source: Boeing.

Reaction Engines, founded in 1989, has targeted 2020 to test an engine core that combines jet and rocket technologies to produce ultrafast speeds. The company has raised more than 100 million pounds sterling -- or about $142 million at current conversion rates -- in funding in the last three years, including this latest round, previous funds from BAE, and about 60 million pounds in U.K. government support. The privately held company is currently constructing a testing facility in Westcott, England.

Reaction Engines is no stranger to the Pentagon. The company has a contract with the U.S. Defense Advanced Research Projects Agency (DARPA) to conduct high-temperature airflow testing of its pre-cooler heat exchange.

The investment comes as Boeing is vying with rivals including Lockheed Martin, Northrop Grumman, and Raytheon for an Air Force contract to develop a hypersonic strike weapon. The Russian military said last month it had tested a nuclear-capable hypersonic missile designed to outrun and out-maneuver enemy defenses, a development that, if true, would put them well ahead of the U.S. and western allies in the development of a new generation of faster missiles.

The Air Force put out a request for a precision-guided hypersonic weapon last summer, and is expected to select a contractor to work within the first half of this year. Boeing has already missed out on a few hypersonic awards, including more than $300 million worth of contracts awarded to Raytheon and Lockheed Martin last fall by DARPA to conduct research on a hypersonic, air-breathing weapons concept.

Boeing expects Reaction Engines' technologies to be incorporated into its internal research and designs.

"As Reaction Engines unlocks advanced propulsion that could change the future of air and space travel, we expect to leverage their revolutionary technology to support Boeing's pursuit of hypersonic flight," HorizonX vice president Steve Nordlund said in a statement.

HorizonX, established by Boeing about a year ago, has now made about a dozen investments in various artificial intelligence, next-generation alloys, testing, and autonomous flight projects, hoping to round out its internal research and development efforts. The unit in February invested in Cuberg, a battery development company, after previously investing in a start-up that is working to develop an electric hybrid aircraft.

The venture capital firm last month was involved in a $15 million round for Australian satellite company Myriota.

These bets are unlikely to move the needle for shareholders anytime soon, but if the company can use technology gained through one of these partnerships to leap to the forefront on an emerging technology like hypersonic, the investments will pay off over time. Michael Griffin, undersecretary of defense for research and engineering, said at a conference last month that hypersonic is the "highest technical priority," hinting that the Pentagon intends to dramatically increase spending on the technology in the years to come.

For fiscal 2019, the Pentagon requested $256.7 million for hypersonics, more than three times what was appropriated for the technology in 2017.

Given that Boeing has ample funds at its disposal -- having generated $11.5 billion in free cash in 2017 -- dabbling in venture capital to augment its internal R&D effort is a move investors should cheer.