Please ensure Javascript is enabled for purposes of website accessibility
Log In Help Join The Motley Fool
Free Article Join Over 1 Million Premium Members And Get More In-Depth Stock Guidance and Research
By Rick Munarriz – Apr 15, 2018 at 10:00AM

The wearable-tech pioneer moves higher, bouncing back after an analyst downgrade the week before.

Fitbit (FIT) has been a meandering mess of an investment over the past two years, but it found a way to be among the market's biggest winners last week. The leading maker of fitness wristbands saw its shares move 11.48% higher for the week. There was no particularly bullish news out on Fitbit to explain the uptick. The shares are likely just bouncing back after hitting all-time lows a week earlier following a Wall Street downgrade.

Yuuji Anderson at Morgan Stanley lowered his rating on the stock from equal weight to underweight, feeling that any incremental gains with its new smartwatches will be more than offset by the declines in its fitness wristbands and other legacy products. Fitbit's been talking up its opportunities in health services, but Anderson feels that it will take some time for those opportunities to play out. His now bearish opinion finds him lowering his price target from $5 to $4. He sees the stock eventually heading as low as $2 as declining demand for Fitbit products begins to accelerate, exacerbating cash burn concerns. 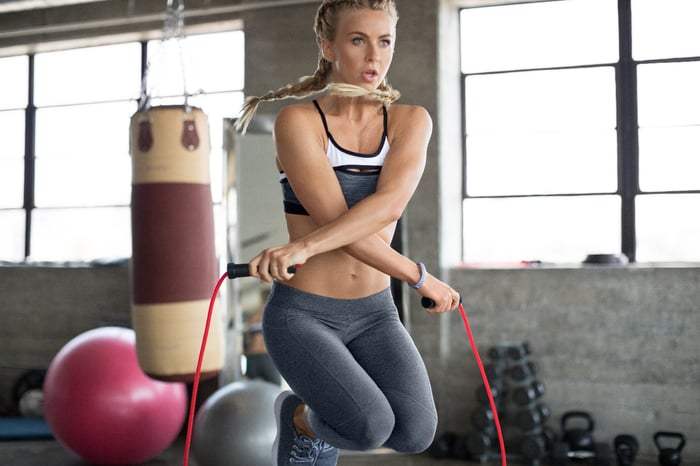 It's hard to get back in shape

Investors need to take last week's rally in stride. Fitbit is still in a funk, trading lower for the third year in a row and shedding 82% of its value in the process. Revenue seemed to stabilize in Fitbit's latest quarter, but there's still a lot of work to be done before we can call this a turnaround. The modest 0.5% decline in revenue was the handiwork of the release of its first smartwatch, a $299 device that drove average selling prices higher at the expense of total devices sold.

Fitbit's making some headway overseas, but it continues to languish closer to home. Revenue took a 13% hit in the U.S., and investors are bracing for another year of declining sales. Fitbit points out that consumer demand is shifting to smartwatches, a niche where it's nowhere close to being the dominant player the was it fitness wristbands.

Though Fitbit's responding to shifting trends with the recent release of a lower-priced $199 smartwatch, it's still targeting revenue of $1.5 billion this year, just below the $1.6 billion it rang up last year and well below the nearly $2.2 billion it scored in 2015.

There are opportunities for growth here. Fitbit's still eyeing growth with its nascent health solutions segment in 2018, increasing its premium subscribers. Fitbit's overall user base also continues to grow despite the contracting unit sales. Active users grew from 23.2 million to 25.4 million last year.

The sentiment still remains negative. Analysts see losses continuing through the next few years. Fitbit's cash-rich balance sheet -- more than half of its market cap is backed by its greenbacks -- will help see it through the red ink, but investors don't have the same kind of patience. Fitbit had a good week last week, but it has a long way to go before earning its keep as either a growth stock or a turnaround story.