Wynn Resorts (NASDAQ:WYNN) may have finally found a way out of the biggest regulatory headache left behind by Steve Wynn. The Wall Street Journal is reporting that MGM Resorts (NYSE:MGM) is in early discussions about buying the Wynn Boston Harbor development just outside of Boston, Massachusetts.

This comes shortly after Massachusetts regulators made clear that they're taking a close look at Wynn Resorts' gaming license in the state and whether Steve Wynn has any control over the company he founded. Steve Wynn has asked that his name be removed from the gaming license, but the easiest solution may simply be to sell the resort to the most logical buyer -- MGM Resorts. 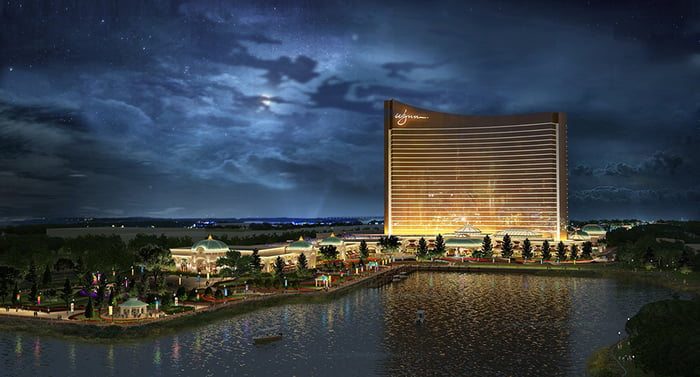 Regulators from Massachusetts and Nevada are both looking into allegations of misconduct by Steve Wynn and the company's responsibility in the situation. But Massachusetts is in a unique position because Wynn Boston Harbor isn't yet complete. The state could potentially pull the gaming license before the resort is completed, an action some in the state legislature have said they should take, which is an extreme measure but not out of the realm of possibility.

Having a good relationship with regulators is key to any gaming operation. Rather than fighting regulators who don't want the company in the state, Wynn Resorts could take an easier path out by selling Wynn Boston Harbor to MGM Resorts, which already has a gaming license in Massachusetts.

How MGM Resorts could make this deal a steal

MGM Resorts is the most logical buyer for Wynn Boston Harbor because it has a gaming license and the ability to finance a large acquisition. Assuming MGM Resorts didn't pay a premium beyond the $2.4 billion construction cost of Wynn Boston Harbor (it could be argued MGM should get a discount), the company could end up with a steal.

I think the formula for funding Wynn Boston Harbor would be similar to how MGM Resorts financed MGM National Harbor near Washington D.C. The property cost $1.4 billion to build, and once it was completed the real estate was sold to MGM Growth Properties (NYSE:MGP) for $1.2 billion. In effect, MGM Resorts got a brand new resort for $200 million.

The same formula could be replicated in Massachusetts. Wynn Boston Harbor's real estate could be sold to MGM Growth Properties; if terms were similar to MGM National Harbor, the real estate could fetch around $2.1 billion. For around $300 million, MGM Resorts could get a coveted casino on the East Coast.

Far from a done deal

I find The Wall Street Journal's report that MGM Resorts could buy Wynn Boston Harbor very believable, but that doesn't mean a deal is done. MGM Resorts is currently constructing MGM Springfield, Massachusetts' other approved casino, and it's not likely the state would allow one company to own both casinos. MGM Springfield would likely be sold if a deal with Wynn is agreed to.

Regulators would also have to bless the deal from both sides -- and given their recent public comments, I'm not sure we know what to expect there. But MGM Resorts would likely need to iron out regulators' concerns before a deal is agreed to.

At the end of the day, MGM Resorts may have a golden opportunity to get an extremely valuable gaming property for a very low price because Wynn Resorts needs to get out of town. It's not a position companies find themselves in often, but MGM Resorts will take the good fortune when it can get it.