One report says Volkswagen may be contemplating a complete buyout.

Shares of Navistar (NAV) jumped 11.4% Monday afternoon, and were holding steady at that level as of 1:40 p.m. EDT. The reason: Volkswagen may buy Navistar.

At least, that's how The Wall Street Journal  is reporting it. In an article Monday morning, the Journal reported that Volkswagen Truck and Bus GmbH, which already owns a 16.9% stake in truckmaker Navistar, "is considering a full takeover of Navistar International Corp." 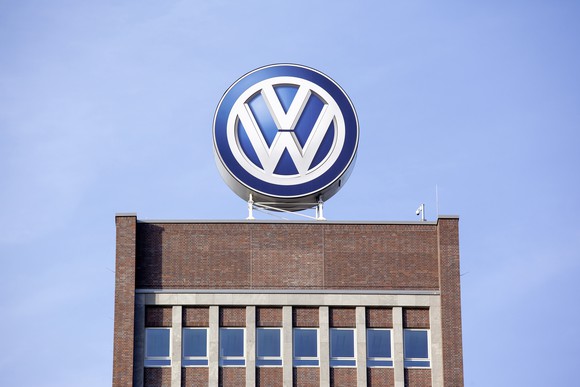 How would this sign look atop Navistar's headquarters in the U.S.? Image source: Volkswagen AG.

How serious is Volkswagen about this? Serious enough that Volkswagen Truck CEO Andreas Renschler went on record suggesting it would be "a good idea" for Volkswagen to buy Navistar outright -- which would be a strange claim to make, bolstering the reputation of a rival, unless Volkswagen is laying the groundwork to secure shareholder support of such a move.

In that regard, while Navistar is declining to speculate on this particular possibility, the company has said that its cooperation with Volkswagen to date is "demonstrating strong progress," a statement you would expect to encourage Navistar's own shareholders to support such a merger.

When might such a deal take place? According to Bloomberg Markets, Volkswagen is contemplating an IPO of its trucks unit as early as 2019. Volkswagen Truck CFO Matthias Grundler says the company could probably manage to come up with the money to buy Navistar even before it gets hold of any IPO cash, so investors may be able to see if this rumor will pan out before this year is out.

Judging from today's trading action, they're not wasting any time in placing their bets.