You might want to give these stocks some consideration.

It's impossible to follow the specific investing strategies of the world's best investors. After all, we don't always know why they make their particular stock picks or how their choices fit into their long-term investing plans.

But knowing which stocks the most successful investors are buying can help the average investor challenge their own ideas about whether a company's stock is worth buying, or even confirm a line of reasoning for their own investing thesis. And if nothing else, it's worth knowing what the top investors are buying simply because they're the best at doing what we're trying to do. That's why you should consider CenterPoint Energy (CNP -2.79%), SandRidge Energy (SD -3.41%), and Apple (AAPL -4.57%). They've all risen to the top of the buy list for some of the world's most accomplished investors. 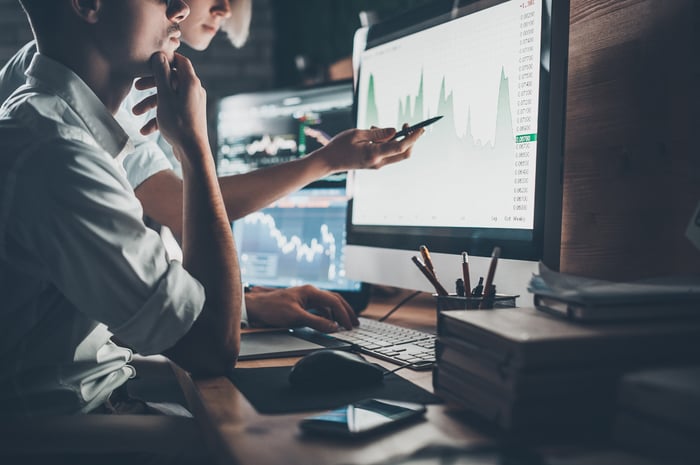 A utility stock with a unique growth component

Maxx Chatsko (CenterPoint Energy): Recent SEC filings show that Bridgewater Associates, the firm founded by Ray Dalio, has been gobbling up shares of Texas-based electric and gas utility CenterPoint Energy. In a span of just three months, from the end of September to the end of December, Bridgewater increased its position 70%. Should you follow the investing legend?

CenterPoint Energy turned in a solid year of operations in 2017. A significant year-over-year improvement was made possible in large part due to struggles in 2016, but the business is definitively stronger now. The electric utility generated about the same operating income in both periods, while the gas utility grew operating income 8% between periods. Meanwhile, the company's high-growth energy services unit churned out $125 million in operating income, compared to just $20 million in 2016.

The biggest reason CenterPoint Energy stock has been more volatile than most slow-growing utilities is its major equity investment in Enable Midstream Partners LP. That position handed the utility equity income of $265 million in 2017, a 27% jump from 2016. As energy prices remain strong and American energy production continues to rise, the investment could prove less risky over time. That would be a boon to shareholders.

Management expects the overall business to continue growing in 2018. After posting 18% EPS growth last year and reporting $1.37 in net income per share, CenterPoint Energy has guided for EPS in the range of $1.50 to $1.60 this year. That should treat shareholders, who are already receiving a healthy 4.1% dividend yield, pretty well.

While this has been riskier than most utilities thanks to the relatively volatile midstream component, management bet the equity stake would provide more room for growth and share appreciation. That could begin paying off in 2018, which may explain Bridgewater's recent interest. That said, investors shouldn't blindly follow Ray Dalio, but instead give this stock a closer look to see if it fits with their own wealth-building strategy.

Carl Icahn has his eye on this energy company

Dan Caplinger (SandRidge Energy): The energy sector has been a topsy-turvy part of the market in recent years, and many smaller energy companies have suffered mightily due to the plunge in crude oil prices that happened in the mid-2010s. SandRidge Energy in particular had to declare bankruptcy in the aftermath of the energy bust, but some investors had high hopes that when the company emerged from bankruptcy protection in late 2016, it would be in a better position to rebound.

Billionaire Carl Icahn seemed to believe that hypothesis when he first started accumulating shares of SandRidge in 2017, but he accelerated his purchases when SandRidge said it would seek to acquire Bonanza Creek Energy. Icahn vociferously disagreed with the move, saying that the deal was a bad idea. SandRidge eventually gave up on the deal in response to more extensive shareholder criticism.

Now, Icahn seems willing to make an even bigger commitment to SandRidge, waging a proxy battle to get directors on the energy company's board, and even weighing an offer to purchase the company outright. SandRidge has said it will evaluate any offers, but it'll be interesting to see whether Icahn can use his activist investor skills to extract the same sort of profits he has earned with investments in other companies in his storied past.

Chris Neiger (Apple): Berkshire Hathaway (BRK.A -1.93%) (BRK.B -1.94%), the holding company run by famed billionaire investor Warren Buffett, snatched up more shares of the iPhone maker at the end of 2017, according to the company's 13F filing in February. Buffett's company has been investing in Apple since the beginning of 2016, but the latest filing shows that the stock purchases are accelerating.

Berkshire bought just 3.9 million shares of Apple in the third quarter of 2017, but it added another 31.2 million shares in the fourth quarter. That brings the company's total amount of Apple shares to a staggering 166 million.

Buffett, who famously used to avoid technology stocks, clearly anticipates more long-term growth for Apple. He said n a recent CNBC interview that Apple has "an extraordinary consumer franchise" and has built a strong ecosystem. That ecosystem of hardware and services sales helped Apple's sales jump 13% and its earnings pop 16% year over year in the most recent quarter. Services revenue was up 18% year over year to nearly $8.5 billion in the fiscal first quarter and accounted for 9.5% of Apple's top line.

Though Berkshire has already increased its position in Apple over the past couple of years, it's likely Berkshire could add to the position. Apple's shares trade at just 13.2 times the company's forward earnings, which makes its stock a relative bargain compared to many tech stocks.