Spotify should be getting nervous right about now.

Apple (AAPL -1.89%) has been noticeably more focused on the streaming space as the music industry starts to grow again after adjusting to the digital world.

Revenue from recorded music in the U.S. jumped 16.5% in 2017 to an estimated retail value of $8.7 billion, according to the RIAA. More importantly, the growth in recorded music revenue in both 2016 and 2017 marks the first time since 1999 that U.S music revenue increased materially for two consecutive years.

Of course, in both years, the revenue growth is mainly thanks to the wave of people signing up for paid music subscriptions, a business that grew by a stunning 50% last year. In one optimistic estimate, Goldman Sachs sees the streaming music market hitting $28 billion by 2030.

A lot can happen in the next twelve years, but the point is there's a lot to be gained from being the top player in this growing industry.

Apple isn't the top dog in music streaming, but its been posting big gains in the space. And that should make Spotify nervous. 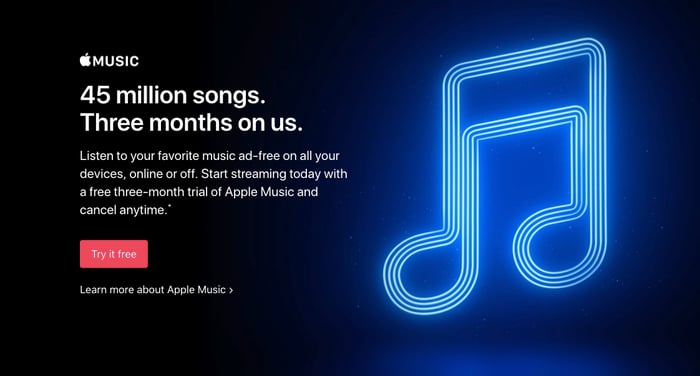 Apple Music launched on June 30, 2015. Users were invited to try a three-month free membership, after which they could start a $9.99 monthly subscription with the service. The same pricing applies today.

By December 2016, a year and a half later, Apple Music had 20 million paid subscribers. It continued to grow at about that same pace, hitting 27 million paid users in June 2017 and 30 million in September 2017.

However, starting in 2018, Apple Music's growth has suddenly doubled to about 2 million additions each month. Apple Music's 36 million paid subscribers in February increased to 38 million in March and then to 40 million in April.

The sudden surge in subscriber additions came right after Apple bought music-discovery app Shazam in December. Shazam claims its app connects more than 1 billion people worldwide, which provides a large base of potential Apple Music subscribers. Apple also released its first TV show, Planet of the Apps, on the Apple Music app last summer and the company is working on creating a solid lineup of original content.

That means that Spotify fell one million shy of adding 2 million subscribers each month from July to December of 2017. Spotify said it expects to reach between 92 million and 96 million paying subscribers this year, according to a filing ahead of its IPO -- so it expects to continue to grow at roughly the same rate.

While there are other competitors in the music subscription business, Spotify is by far the largest. In addition, other players like Amazon Prime Music and SoundCloud don't yet release subscription figures. The closest Amazon (NASDAQ: AMZN) came to hinting at its number was in an interview with The Verge when it said it had "tens of millions of active subscribers."

However, Spotify still has no clear path to profitability as it continues to put its primary focus on growth. The company expects to grow revenue by 20% to 30%, to between $6.1 billion and $6.8 billion this year. That's a drop from the 39% revenue growth it saw this past year.

Apple Music is lumped into Apple's services revenue, which saw a healthy 18% year-over-year increase to $8.5 billion last quarter. Apple is still aiming for at least $48 billion in services revenue by 2020 and it's on track to hit that target. As Apple starts to release more original content on its platform, it's sure to get a boost in subscribers that could help it catch up to Spotify.

Spotify is also looking for other ways to help it make money, but it doesn't have the same cash to put behind content that Apple does. So instead of trying to produce those shows on its own, Spotify seems to have found a shortcut. On April 11, Spotify announced a $12.99 per month bundle that gives subscribers access to Hulu's video on demand (with ads) and to Spotify Premium. This comes a few months after Spotify launched Spotlight, a platform that adds visual elements to podcasts and other audio experiences.

Spotify still has a comfortable lead over Apple, and it's continuing to grow and work on becoming more of a multimedia company like the tech giant. Both services are picking up pace in their growth, but in the future, the quality of TV shows and films on a music app could be what determines the ultimate winner. And Apple seems to be in a better position to take that spot.