If all of your peers were exploring developing custom silicon catered to specialized purposes, would you?

For social networking giant Facebook (META -2.88%), the answer to that question appears to be "yes." Tech companies have been increasingly looking to develop their own custom chips in recent years, allowing them to design the silicon to their own specifications depending on its intended purpose or the ultimate product it will make its way into. Apple was an early trailblazer in this respect, introducing its first custom A4 chip back in 2010. In the years since, the Mac maker's chip strategy has only grown more ambitious, and Apple now designs more silicon than ever before. 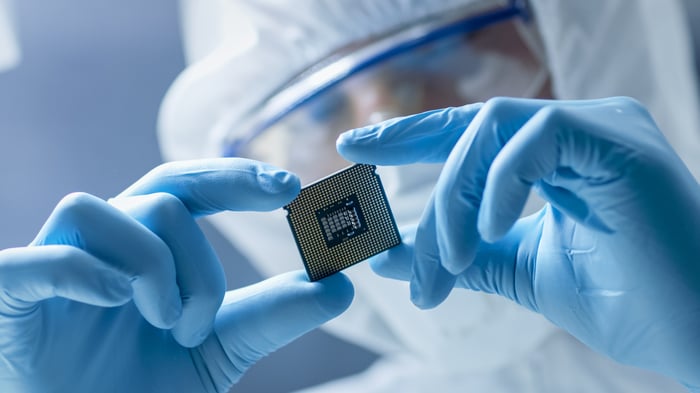 Bloomberg reports that the social network is starting to build a team of semiconductor engineers, pointing to public job postings as well as anonymous sources. Facebook is looking for candidates that can help build systems-on-chip (SoCs) and application-specific integrated circuits (ASICs). SoCs are the main processors that handle most workloads in mobile devices, while ASICs tend to be dedicated to specific tasks. Facebook subsidiary Oculus is also hiring for a SoC architect, as the virtual reality (VR) company continues to develop its own hardware. Beyond some clues that Facebook wants to leverage custom chips for artificial intelligence (AI), it's not clear what else the company has in mind.

We do know that Facebook is hard at work on its first consumer hardware product (not including Oculus), which is reportedly some type of smart speaker dubbed "Portal" that may include video-calling functionalities. Facebook had been planning on unveiling the device at its annual F8 developer conference in May, but has pushed back that timeline so that the company can focus on damage control in the wake of the Cambridge Analytica scandal.

Beyond Apple, Alphabet subsidiary Google is venturing into custom chips, starting with its Pixel Visual Core, a custom image co-processor that the search giant has put in its latest generation of Pixel phones. Google hardware chief Rick Osterloh has confirmed that there are more custom chips in the pipeline.

In February, The Information reported that Amazon.com is also pursuing custom chips to put into its lineup of Echo smart speakers, improving the devices' ability to process information locally instead of relying entirely on the cloud. Doing so would improve the speed at which Alexa can respond, reducing the inherent latency associated with cloud computing.

Even electric-car maker Tesla is looking to develop custom AI chips that could be used for semi-autonomous and autonomous driving purposes, which is the whole reason why it hired famous chip architect Jim Keller in 2016. CEO Elon Musk recently said that Keller will make "the best custom AI hardware in the world."

Facebook's hardware strategy is still very much in the early innings, but given the long time horizon required to bring custom chips to market, the social network is right to start taking the initiative now.