Please ensure Javascript is enabled for purposes of website accessibility
Log In Help Join The Motley Fool
Free Article Join Over 1 Million Premium Members And Get More In-Depth Stock Guidance and Research
By Danny Vena – Apr 19, 2018 at 7:45AM

Shares of the toymaker have been weighed down by the demise of Toys R Us.

The bankruptcy filing in September by toy retailer Toys R Us had already taken a toll on toy sales during the holiday season, and many toy companies suffered as a result. Then the mid-March announcement that the iconic retail chain was closing its doors entirely left the whole industry mired in doubt.

Hasbro Inc. (HAS -2.51%) is scheduled to release financial results for its just-completed first quarter before the market opens Monday. Some analysts are forecasting that the loss of Toys R Us as a sales channel could dent the toymaker's revenue by as much as 5% in 2018. Let's review what investors should look for in the upcoming report. 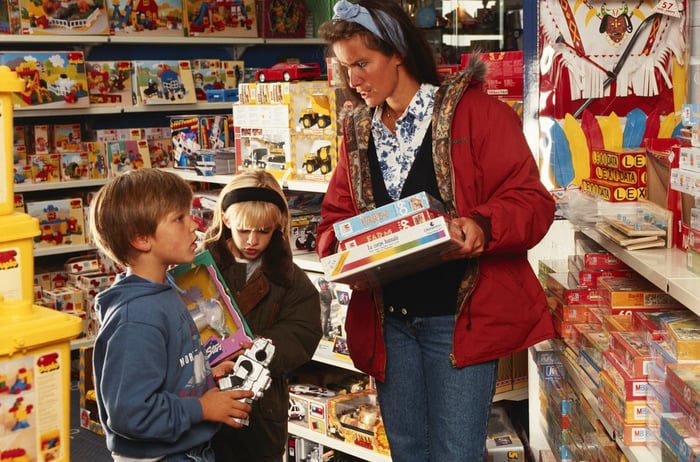 How much has the Toys R Us liquidation affected Hasbro? Image source: Getty Images.

For Q4 2017, Hasbro reported revenue of $1.6 billion, 2% lower than the prior-year quarter. That missed both analysts' consensus estimate of $1.72 billion and Hasbro's own forecast range of $1.70 billion to $1.74 billion. The shortfall was primarily the result of a writedown related to Toys R Us, and a temporary suspension of shipments while the company renegotiated terms with the now defunct retailer.

During Hasbro's earnings conference call, CEO Brian Goldner addressed the issue. "Much of this impact will be felt in the first two quarters of the year," he said. "We anticipate during 2018 that we will right-size our business with Toys R Us."

When pressed by analysts for additional details, Goldner said:

We've always said we had an expanding retail channel network. We go to more doors today than ever before and more new channels including value and drug and grocery ... we have a plan on how we manage our risk in inventory and support them but also have a growing array of destinations.

At the time, Jeffries analyst Stephanie Wissink said in a research note to clients, "Toys R Us risk is contained and contingency plans are prepared if there is a full liquidation event."

This revelation and the comments by Hasbro's management seemed to calm the fears of investors, though it's important to remember that these pronouncements came when Toys R Us was expected to close roughly 180 stores, or about 20% of its U.S. retail locations -- and before the company announced its liquidation. At the time of the bankruptcy filing, Toys R Us owed Hasbro $53 million, so the disposition of that debt could also come into play.

Hasbro hasn't yet offered guidance for 2018 -- natural, given that the situation was still extremely fluid. Management did say during the earnings conference call, "We feel very good about the full year 2018 prospects. We're very excited about the initiatives that we have lined up for 2018." The company specifically cited strong growth from its franchise brands like Nerf, Transformers, and My Little Pony, as well as strength in its games segment.

For Q1, analysts' consensus estimate is for earnings per share of $0.34, a decline of 37% compared to the $0.54 per share achieved in the same quarter last year. Revenue estimates are also muted: Hasbro is expected to generate sales of $819.4 million, a decline of 3.56% year over year.

For Q2, analysts' consensus estimate is for revenue of $954.26 million, which would be a decline of 1.9% compared to the same quarter last year, and earnings per share of $0.50, down 6% year over year.

Investors should remember that this isn't the first time a major toy retailer has closed its doors. KB Toys, which had over 1,200 locations at its peak, was shuttered in 2009. And Hasbro was much less exposed to the Toys R Us closure than some of its competitors, thanks to its long-term efforts to diversify its sales channels.

Investors will be watching for Hasbro's guidance for the coming quarter and the year for insight into how long it will take the toymaker's business to recover. Hasbro will likely be just fine in the longer term, but its situation could get worse before it gets better.