Shares of Altria Group, Inc. (MO -1.92%) and Philip Morris International (PM -3.58%) were sliding today as a weak earnings report from Philip Morris weighed on the tobacco giants. The news came just a day after Altria stock fell on several analyst downgrades as investors seem to be getting jittery about tobacco stocks. As of 12:21 p.m. EDT, Philip Morris was down 16.6% and Altria was down 7.4%.

Philip Morris, the maker and distributor of brands like Marlboro outside of the U.S., posted disappointing revenue growth and said sales of its vape product, IQOS, were plateauing. Currency-adjusted net revenue excluding excise taxes increased 8.3% to $6.9 billion, below estimates at $7.03 billion. However, operating income was flat, increasing by 0.4% to $2.4 billion, and adjusted earnings per share increased 2% to $1, ahead of estimates at $0.90. 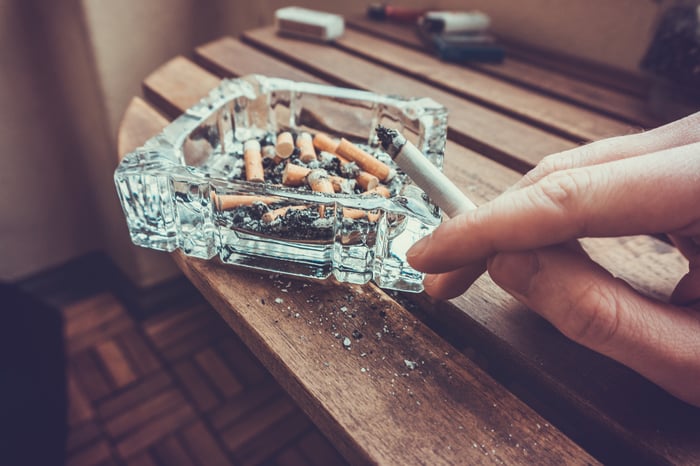 The stock sold off as the company warned about continuing volume challenges in the Middle East, the pricing environment in Russia, and slowing growth in IQOS in Japan, which was thought to be a promising test market for the new product.

Successfully transitioning to vape products is key for tobacco companies as cigarette consumption declines, and the results weighed on Altria, even though the company only sells its products in the U.S.

It was the worst one-day slide for Philip Morris in a decade as it's a stock that's usually regarded as a stable dividend payer. CEO André Calantzopoulos offered a positive spin on the trend, saying, "Even if this temporary dynamic in Japan persists, we remain on track to double our worldwide in-market sales of heated tobacco units compared to 2017." The company also raised its earnings per share forecast to $5.25-$5.40 due to a lower effective tax rate. Still, the reaction to the IQOS news makes it clear that tobacco stocks may no longer be the safe bet they have been for decades.