This incredible growth story looks like it's still in its early stages.

Netflix (NFLX 9.29%) can still shock Wall Street. The streaming video giant this week posted earnings results that trounced expectations yet again. Sales growth accelerated, passing 40% to set a new first-quarter record. Over 7 million new members signed up for the service, and that success brought global membership up to 125 million from 99 million a year ago.

On key metrics such as subscriber growth and profitability, there appears to be plenty of room for additional gains ahead. 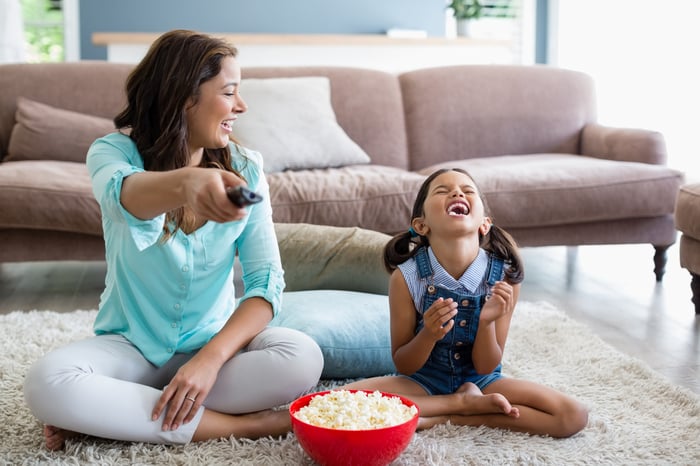 CEO Reed Hastings and his team had predicted that subscriber growth would stop at 6.35 million in the first quarter. That would have marked a big acceleration over the prior year's 4.95 million customer addition, but actual gains came in much higher, at 7.4 million. That user growth combined with a 14% spike in average monthly prices to push Netflix's sales up 43% -- its fastest streaming revenue spike yet.

The company's forecast calls for an even better result next quarter. And, assuming Netflix simply reaches its second-quarter outlook, subscriber growth through the first half of the year will be 13.6 million, or 33% above the prior-year period's 10.15 million additions.

Profitability also expanded at a faster rate than expected. Operating margin leapt to 12%, which put the metric well ahead of the 10% target management had forecast for the full year (up from 7% in 2017).

Part of that boost was driven by a timing shift since Netflix plans to spend heavily on content and marketing in the second half of the year. But a big piece was simply a function of surprising strength in user gains. "It's somewhat an acknowledgement that the business is growing so well," CFO David Wells said about the margin expansion in a conference call with analysts.

The rest of the year

Netflix didn't update its official profitability forecast, so investors will have to wait another quarter or two to learn whether operating margin will expand by much more than management's 3 percentage-point goal.

As for subscriber gains, 2018 is already shaping up to be another record year for growth. Hitting next quarter's projection would put Netflix more than half way to the 24 million members it added in 2017. Meanwhile, some of its biggest original content releases are timed around the seasonally strong period in the third and fourth quarters. In a strategic shift, the company also plans to heavily market these releases through ramped-up advertising spending.

Since Netflix's profitability will ultimately be a function of its size, and its monthly pricing depends on average viewing per member, it makes sense that management is doing everything it can to maximize subscriber growth and engagement. That strategy has already yielded incredible subscriber gains over the last few years, but there's a massive market opportunity ahead, both in terms of broadband households that haven't yet subscribed and current members whose streaming volumes could stand to rise.

Netflix added 19 million members in 2016, and that growth pace accelerated to 24 million in 2017. It's still early, but this fiscal year has a good shot at speeding annual global gains for a fifth consecutive time.