Which of these high-yield dividend stocks is the best choice for your portfolio?

Coca-Cola (KO -0.58%) and Anheuser Busch InBev (BUD -0.78%) have long been bastions of bountiful dividend income for investors. With the soda titan and beer king currently yielding 3.5% and 3.8%, respectively, that remains the case today.

But which of these dividend stalwarts is the better buy? Let's find out. 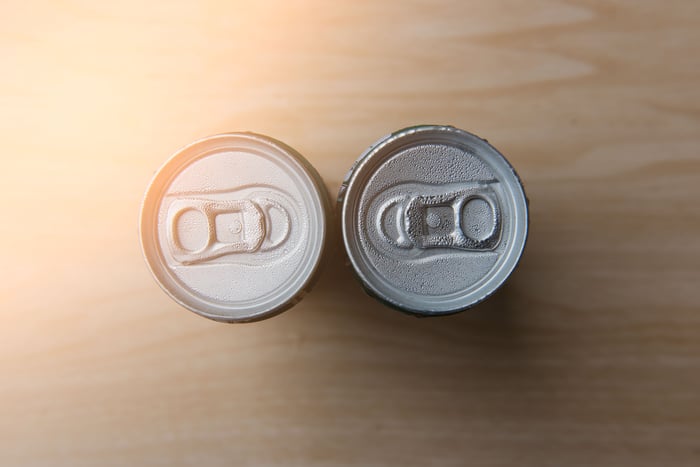 Anheuser Busch Inbev and Coca-Cola face off in this showdown for your investment dollars. Image source: Getty Images.

Coca-Cola's and Anheuser Busch InBev's economic moats are built upon their massive global distribution networks. It's difficult for competitors to gain share when these beverage titans' bottles and cans already occupy the great majority of store shelves in most other parts of the world. Additionally, both Coca-Cola and AB InBev are notorious for aggressively defending their market share.

With both of these beverage titans enjoying wide economic moats, I'm going to call this first category a draw.

Let's now take a look at some key metrics to see how Coca-Cola and AB InBev stack up in terms of financial strength.

AB InBev has about twice as much operating and free cash flow than Coca-Cola, giving it the edge in terms of annual cash production. But with a balance that contains 60% -- or $70 billion -- less debt and 75% ($9 billion) more cash, Coca-Cola is the more financially sound business.

While Coca-Cola has the stronger balance sheet, Anheuser-Busch is growing much faster. Wall Street expects AB InBev to increase its earnings per share at an annualized rate of 23% over the next half-decade, fueled by its "premiumization" strategy -- in which it aggressively promotes its higher-priced brands -- and continued gains related to its blockbuster merger with SABMiller. During this same time, Coca-Cola's EPS is projected to rise by less than 8% annually, driven mostly by its cost-cutting initiatives and low single-digit revenue growth. Thus, AB InBev has a clear edge in terms of expected earnings growth in the coming years.

No better-buy discussion should take place without a look at valuation. Let's check out some key value metrics for Coca-Cola and Anheuser Busch, including price-to-free cash flow, price-to-earnings, and price-to-earnings-to-growth (PEG) ratios.

On all three metrics, Anheuser Busch's shares are significantly less expensive than Cola-Cola's. This is particularly true when it comes to their PEG ratios, which accounts for AB InBev's far greater expected EPS growth rate. As such, the beer king is currently the better bargain.

Coca-Cola is a high-quality business, but with its superior growth prospects and more attractively priced stock, Anheuser Busch InBev is the better buy today.