Please ensure Javascript is enabled for purposes of website accessibility
Log In Help Join The Motley Fool
Free Article Join Over 1 Million Premium Members And Get More In-Depth Stock Guidance and Research
By Steve Symington - Updated Mar 3, 2018 at 1:09AM

Anheuser-Busch InBev (BUD 2.75%) announced fourth-quarter 2017 results on Thursday, detailing accelerated organic growth and incremental cost synergies from its megamerger with SABMiller just over a year ago.

With shares up more than 3% as the market digested the news, let's take a closer look at what AB InBev accomplished over the past few months, as well as what we can expect from the brewing titan in the coming quarters. 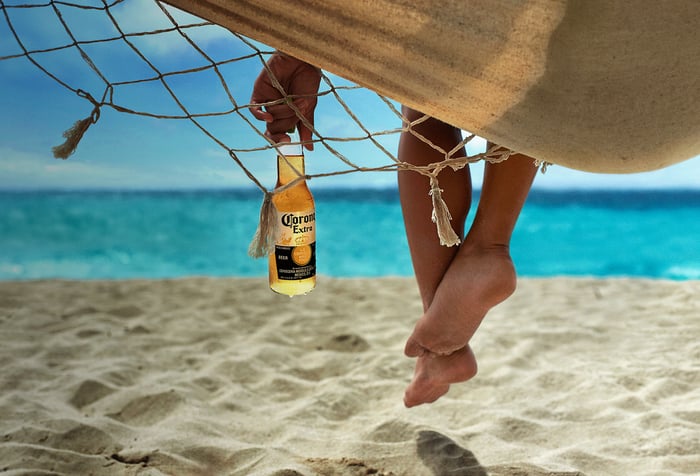 In a prepared statement, AB InBev management called 2017 a "transformative year" and the company's best performance in three years, driven by its enviable portfolio of over 500 brands -- including seven of the world's top 10 most valuable beer brands -- which has been "reshaped ... to capture future growth."

Furthermore, the fruits of the SABMiller merger have exceeded expectations, with greater-than-expected cost and revenue synergies arriving at a faster-than-anticipated pace.

"As the world's leading brewer, we take responsibility for the health and growth of the global beer category," AB InBev added. "We are using our industry-leading analytics, insights, and brands to understand and address the evolving needs of consumers around the world."

Despite ongoing volatility in some key markets, AB InBev expects continued revenue and EBITDA growth in fiscal 2018 to be driven by premiumization and revenue management initiatives -- particularly as it shifts its focus to category development. As such, AB InBev expects it will achieve growth in net revenue per hectoliter above inflation for the year, while keeping cost increases below inflation.

In the meantime, the company expects a "softer" first quarter as it laps a difficult comparison to the same year-ago period, and as it transitions to new sales and marketing initiatives.

In addition, AB InBev reiterated its goal for capturing a total of $3.2 billion in merger synergies and cost savings. As of the end of 2017, it had already delivered $2.133 billion of that total, and it expects to capture the remainder over the next two to three years.

All things considered, there was little not to like about AB InBev's strong end to the year. And its outlook offers plenty of reasons for investors to remain optimistic for its future, as the company operates from a position of global strength.