Please ensure Javascript is enabled for purposes of website accessibility
Log In Help Join The Motley Fool
Free Article Join Over 1 Million Premium Members And Get More In-Depth Stock Guidance and Research
By Christy Bieber – Apr 22, 2018 at 8:45AM

Tax reform's repeal of the Obamacare mandate penalty could put Obamacare at risk.

In 2012, the Supreme Court of the United States upheld Obamacare in a 5-4 ruling, with Chief Justice John Roberts writing the majority opinion. Many Obamacare opponents believe Roberts used contorted reasoning to save the law by labeling Obamacare's individual mandate penalty a tax.

Now, six years later, 20 states have seized on the Roberts ruling to ask the courts again to undo Obamacare. These states filed a lawsuit indicating that because the December 2017 tax reform bill repealed the individual mandate penalty, there's no longer any legal rationale for the mandate. They also argue that because there's no "severability clause" in Obamacare, the entire law must be struck down.

If this sounds confusing, read on to unpack what's going on with this latest attempt to undo Obamacare through the courts. 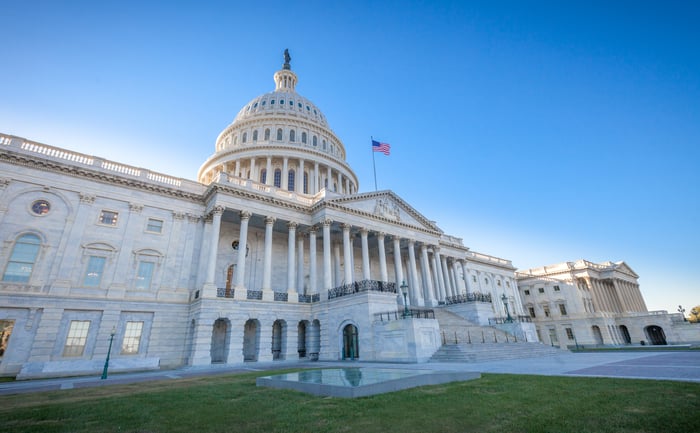 The Obamacare mandate was ruled a tax

Almost as soon as Obamacare passed, dozens of lawsuits were filed challenging its constitutionality. One of the lawsuits with the potential to do the greatest damage attacked the individual mandate at the heart of the law.

The individual mandate required Americans to buy qualifying health insurance coverage unless they fit within an exemption or had coverage through a group policy or government program. Those who didn't buy coverage would face a penalty. The mandate was key to bringing healthy people into Obamacare's insurance markets and stabilizing them, since insurers were forbidden from denying coverage or charging more to people with pre-existing conditions.

Opponents of the law argued Congress didn't have the power to require individuals to purchase a product from private insurers, while the Obama administration argued authority for the mandate came from the Commerce Clause, which gives the federal government power to regulate commerce "among the several states."

A majority of the Supreme Court didn't buy Obama's commerce clause argument for reasons not relevant to this discussion -- but the court didn't strike down the individual mandate. Instead, a 5-4 majority joined in a ruling stating Congress had the authority to pass the mandate under its power to levy taxes.

It was this ruling -- that the mandate was a tax -- that brings us to the new court challenge.

The tax has been repealed -- so the law has to go?

In December of 2017, the Tax Cuts and Jobs Act eliminated the tax penalty for not purchasing insurance. Beginning in 2019, those who don't obtain minimum essential coverage will no longer owe a tax.

However, Obamacare and its mandate remain the law of the land -- there's just no longer a tax penalty to enforce the mandate. This led 20 states to file a lawsuit arguing the mandate unlawfully remains on the books "without any accompanying exercise of Congress's taxing power." In other words, there's no longer legal justification for the mandate since the Supreme Court already held Congress didn't have the authority to enact the mandate unless it was a tax.

At first glance, it would appear this just would result in the mandate being struck down -- which would have little impact because the penalty has already been repealed. However, the lawsuit claims the entirety of Obamacare should be struck down due to the unjustifiable mandate because there's no "severability clause."

Is this argument likely to be successful?

Whether the argument has merits or not, striking down Obamacare years after implementation would cause significant disruption. Since Chief Justice Roberts went out of his way to save the law even before it was in effect, there's little reason to think the court won't find a way to preserve Obamacare now.

While the makeup of the court has changed since the 2012 ruling -- Neil Gorsuch replaced Antonin Scalia -- this change won't tip the balance because Scalia was among the four justices who voted against Obamacare initially. Unless one of the five justices who preserved Obamacare is replaced before the new lawsuit reaches the court, the lawsuit is likely to become another failed attack.

However, with several justices advancing in age, President Trump may have the chance to nominate more justices to the Supreme Court with ideological objections to Obamacare. If so, the tax framework that saved Obamacare in 2012 may prove to be its undoing.

What happens if the court strikes down Obamacare?

If the Supreme Court determined Obamacare was unconstitutional and overturned the law, this would undo fundamental changes made to the U.S. insurance system, including protection for people with pre-existing conditions and a Medicaid expansion that opened up eligibility to families with incomes up to 138% of the federal poverty level.

The result would likely be millions losing coverage. In fact, the Congressional Budget Office determined repeal of Obamacare would likely lead to 32 million more uninsured Americans over a decade. It would also double insurance premiums and insurers would likely begin excluding sick people from coverage and selling policies that don't include minimum essential benefits such as maternity care or mental health coverage.

While there would likely be tremendous pressure on the federal government to provide some type of fix, divided government might make this impossible, leaving Americans to cope with an insurance market in chaos. Those concerned about the fate of Obamacare -- whether you prefer repeal or for the law to be upheld -- should remember that questions over the law's fate remain very much undecided.