Please ensure Javascript is enabled for purposes of website accessibility
Log In Help Join The Motley Fool
Free Article Join Over 1 Million Premium Members And Get More In-Depth Stock Guidance and Research
By Leo Sun – Apr 23, 2018 at 11:00AM

In recent years, many teen apparel retailers have filed for bankruptcy due to declining mall traffic, competition from e-tailers and fast-fashion retailers, and shifting teen tastes. However, more resilient apparel retailers have survived by closing stores, expanding their e-commerce initiatives, and launching fresh brands. 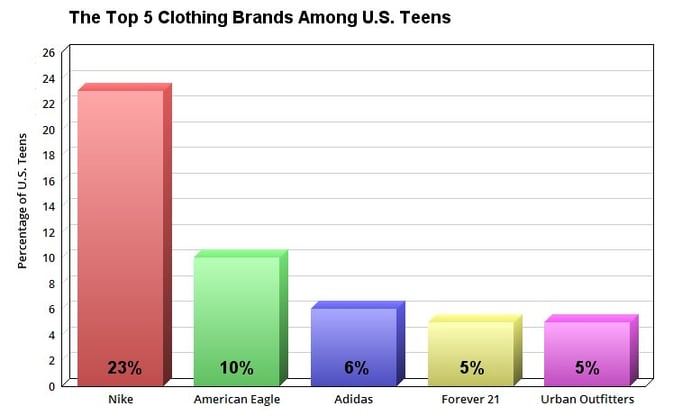 Nike's popularity was supported by robust demand for high-end footwear and athletic apparel, but the brand continues to struggle against Adidas in North America. Nike's North American sales fell 6% year over year last quarter, but Adidas' grew 31% on a currency-neutral basis, fueled by strong demand for its retro styles and Boost foam shoes.

American Eagle's popularity among teens is rooted in its jeans and female apparel. The company saw comparable-store sales jump 8% last quarter, led by a 34% surge in its Aerie segment. Forever 21 remains ahead of fast-fashion rivals like H&M, while Urban Outfitters' unique blend of kitsch merchandise and apparel lifted the brand's comparable-store sales by 2% in its fiscal fourth quarter.