Energy is an absolutely fascinating industry to follow right now. On one side, you have oil and gas companies selling at incredibly low valuations, despite the fact that oil prices are above $70 a barrel. On the other side, you have renewable-energy companies with a multitrillion-dollar growth highway ahead of them.

With these interesting trends emerging, there's no doubt that investors are looking at this industry. To help investors start their search for great energy investments, we asked three of our investing contributors to each highlight a stock they see as a great buy now. Here's why they picked Magellan Midstream Partners (MMP -1.33%), Brookfield Renewable Partners (BEP -1.46%), and SunPower (SPWR -5.86%). 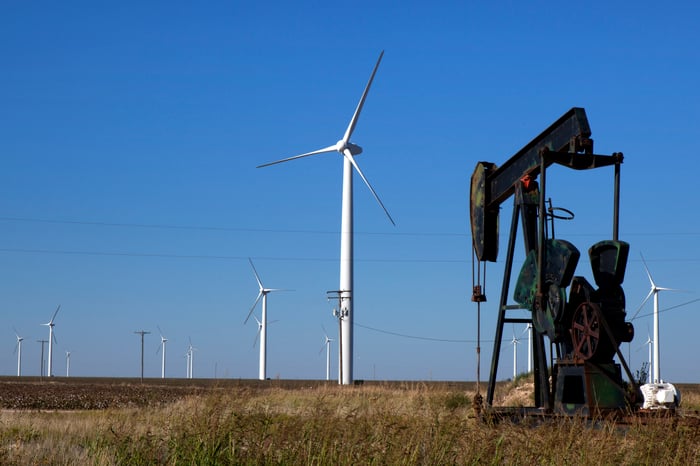 Reuben Gregg Brewer (Magellan Midstream Partners, L.P.): This company is among the most conservatively run midstream oil and natural gas players. Its debt-to-EBITDA ratio is well below industry bellwethers like Enterprise Products Partners L.P. and Kinder Morgan, Inc. And it avoids dilutive unit issuance, with its unit count effectively flat over the past five years compared to a roughly 17% rise at Enterprise.

With Magellan's price down roughly 33% from 2014 highs, it's a good time for investors to pick up an industry-leading name on the cheap. But why the sell-off?

The answer is that investor sentiment on the midstream space has turned negative, with the Alerian MLP ETF down 50% from its highs. The negative shift isn't unreasonable, as some midstream players are highly leveraged and a number have been forced to trim distributions. But neither of those issues apply to Magellan, which has increased its distribution every quarter since its IPO in 2001. 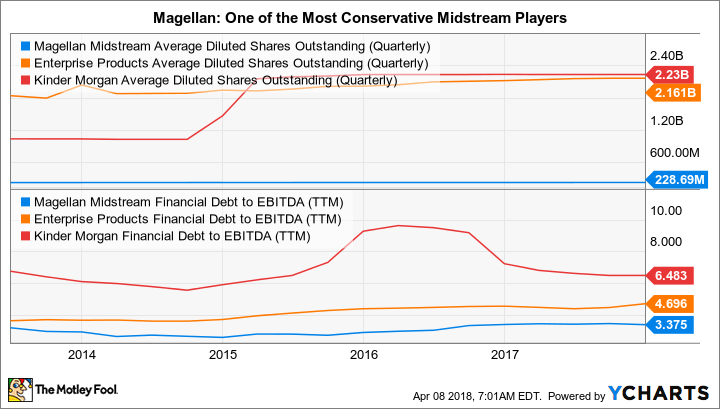 More important for the future, Magellan plans to keep increasing distributions between 5% and 8% a year between now and 2020 while maintaining robust distribution coverage of 1.2 times. The key is its pipeline of capital investments. But Magellan doesn't build on spec, it only risks its unitholders' money when it has a good reason to do so.

For example, of the roughly $1.2 billion in spending planned for this year and next, virtually all of the projects have customers lined up, which clearly illustrates a need for expansion at existing assets. As an industry standout, Magellan is a solid option for any investor.

Tyler Crowe (Brookfield Renewable Partners): One of the greatest challenges for investors is finding a company in the renewable-energy industry that's built to last decades. Alternative energy is such a fast-moving market that today's technology could be upended in a couple of years.

We've seen many upstart companies come and go as the fundamentals of the industry change. So investors looking into this industry generally have to look at a basket of stocks or have the stomach to ride through the extremely volatile nature of the market. Fortunately, there's at least one investment in alternative energy that looks built to last for decades, and that's Brookfield Renewable Partners.

Brookfield Renewable Partners is one of the many investment vehicles managed by Brookfield Asset Management. Brookfield arguably is one of the best real estate and infrastructure asset managers out there, with a long track record of generating steady returns for investors over the long haul. With Brookfield Renewable Partners, investors get a 13.7-gigawatt portfolio of hydroelectric, wind, and solar-power-generating assets, as well as battery storage facilities in nine countries. What's more important than the portfolio size and diversity is how Brookfield manages and grows its portfolio.

One thing that sets Brookfield apart from similar investments like yieldcos is its conservative approach. Management has a track record of maintaining a strong balance sheet so it can invest heavily when asset values are at their lowest. Also, instead of trying to put up eye-popping growth rates or juicy yields, Brookfield instead focuses on paying a yield around 5% with a 6%-9% annual growth rate. Over time, that adds up to significant returns that have outpaced the market since  inception.

Brookfield Renewable Partners has a formula for success that's worked for close to two decades. With loads of new investment opportunities in the renewable-energy industry coming down the pipe, there'll be ample opportunities for the company to maintain its steady pace of growth.

A solar manufacturer making all the right moves

Travis Hoium (SunPower): No solar company was more negatively impacted by the Trump Administration's solar tariffs than high-efficiency solar-panel manufacturer SunPower, which manufactures most of its products in Asia. But the company may turn a huge weakness into a point of strength.

SunPower recently agreed to buy U.S. solar manufacturer SolarWorld Americas in a deal that would make it the biggest domestic solar-panel producer. SolarWorld makes panels in Hillsboro, Oregon, and filed for bankruptcy protection in 2017 because it couldn't compete with foreign competition. SunPower's management says the tariffs of 30% on solar-panel imports will make the plant economical, and SunPower will be able to add its full-service solutions, like racking and inverters, to leverage the added domestic capacity.

What makes the Oregon plant really intriguing is that SunPower will convert 25% to 50% of its 550 megawatts (MW) in solar-panel capacity to P-Series, a module assembly process that increases the efficiency of solar panels by about 5%. SunPower can use imported solar cells, which would likely avoid tariffs because of an exemption on the first 2,500 MW of solar cell imports, to make solar panels for utility-scale projects, or use SolarWorld's existing cell capacity to make panels. No matter what it does, SunPower is suddenly the biggest solar manufacturer in the U.S., and that's a big deal in 2018.

I think SunPower's superior technology and newly expanded U.S. manufacturing make this a top energy stock right now. We're in the early innings of solar energy's growth, and buying one of the industry's leaders at a market cap of just $1.3 billion is a steal given the industry's multitrillion-dollar opportunity.