Please ensure Javascript is enabled for purposes of website accessibility
Log In Help Join The Motley Fool
Free Article Join Over 1 Million Premium Members And Get More In-Depth Stock Guidance and Research
By George Budwell - Apr 24, 2018 at 11:00AM

Bellicum Pharmaceuticals may appear like a bargain, but a deeper dive suggests otherwise.

Bellicum Pharmaceuticals (BLCM 2.65%), a controllable cellular immunotherapy company, has been a consistent laggard within its high-flying peer group. As proof, the company currently sports a market cap of only $307 million, which is astonishing given that its closest peers, Juno Therapeutics and Kite Pharma, sold for a mind-bending $9 billion and $12 billion, respectively.

Is this laggard ready to turn the corner? Let's dig deeper to find out. 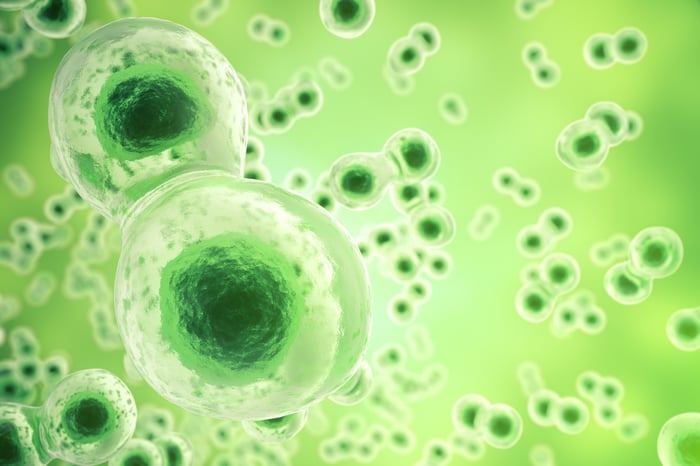 Bellicum is attempting to bring a safer and more potent form of adoptive cell therapy to market for a variety of cancers and orphan inherited blood disorders. By doing so, the company hopes to overcome the extensive leads currently held by the FDA-approved therapies of Gilead Sciences (GILD -0.11%) -- via its acquisition of Kite Pharma, and Novartis (NVS 0.84%).

At present, Bellicum is advancing its lead therapy, BPX-501, into pivotal trials in Europe as a treatment for graft-versus-host-disease in patients undergoing hematopoietic stem cell transplants. This experimental therapy was also just released from a clinical hold in the United States, paving the way for BPX-501 to make headway domestically. As things stand now, the biotech plans on having BPX-501 under regulatory review in Europe by 2019.

In addition, Bellicum is also advancing the chimeric antigen receptor T cell (CAR-T) therapy, BPX-601, for patients with advanced pancreatic cancer, as well as the high-affinity T cell receptor, BPX-701, as a treatment for refractory or relapsed acute myeloid leukemia and myelodysplastic syndromes. Both of these high-value product candidates are currently in early stage, proof-of-concept trials.

Unfortunately, the risks facing early shareholders are legion. First, the adoptive cell therapy market has stumbled out of the gate. Novartis' Kymriah and Gilead Sciences' Yescarta, for instance, have both generated staggeringly poor sales during their first quarters on the market, and the sales of these pioneering therapies don't appear to be getting any better due to reimbursement issues, manufacturing problems, and the fact that they cure some patients (no repeat business).

Another serious risk factor is that Bellicum's particular adoptive cell platform could become obsolete in the near future. Companies are already moving beyond the approaches employed by Bellicum in order to produce therapies that can be manufactured at scale in a time efficient manner.

Gilead Sciences, for instance, signed a licensing deal with Sangamo Therapeutics to use zinc-finger nuclease gene-editing technology to develop more commercially friendly CAR-T therapies, and the CRISPR gene-editing group is gearing up to do the same. Bellicum, for its part, seems destined to get left behind.

Lastly, Bellicum remains in a precarious financial position, even after its latest capital raise. With a burn rate of nearly $22 million per quarter and no licensing deal to speak of, the biotech may need to dilute shareholders again within the next twelve months.

Is Bellicum a buy?

In a nutshell, the answer is no. Bellicum's paltry market may appear out of place within its peer group, but it actually reflects the company's weak competitive position in this rapidly evolving field. In the next year or so, for example, adoptive cell therapies will almost certainly become more user friendly and commercially viable.

Bellicum, in turn, would be bringing a somewhat antiquated technology to market by the 2019 to 2020 time period -- which is a testament to just how fast this field is progressing. And with more potent, safer, and scalable platforms coming online all the time, this tiny biotech simply isn't likely to strike a licensing deal to solve its long-term financial problems at this point.

Long story short, Bellicum failed to keep up with the blistering pace set by the leaders in adoptive cell therapy, and now the company no longer offers a compelling risk to reward ratio as a result.