Please ensure Javascript is enabled for purposes of website accessibility
Log In Help Join The Motley Fool
Free Article Join Over 1 Million Premium Members And Get More In-Depth Stock Guidance and Research
By Keith Speights – Apr 25, 2018 at 5:02AM

There's a lot to like about Exact Sciences. But don't overlook the risks.

Yes, Exact Sciences (EXAS 7.73%) stock is underperforming the S&P 500 so far this year. And yes, many investors were underwhelmed by the company's choice of Harry Connick Jr. and his wife, Jill, to be featured in a national campaign to raise public awareness about cancer screening. 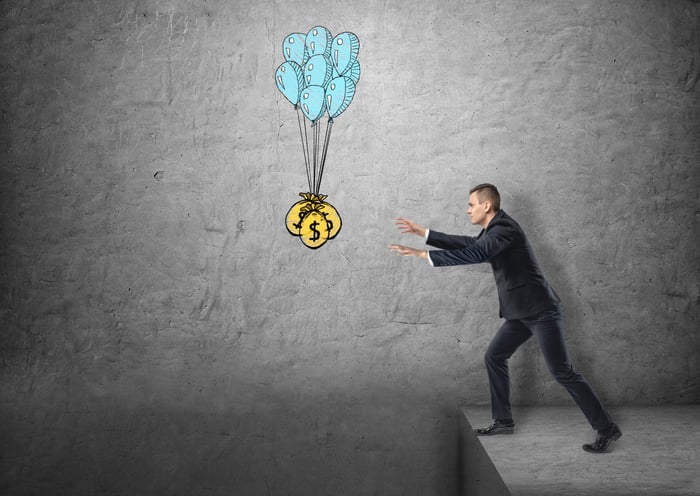 Another number that doesn't lie, though, is that nearly 40% of Americans still don't get screened for colon cancer. Probably the biggest reason they don't is the uncomfortable preparation and inconvenience associated with colonoscopies. Colorectal cancer is preventable if individuals are screened early enough, but many people simply don't want to undergo a colonoscopy.

This presents an enormous opportunity for Exact Sciences. Cologuard is a convenient and reliable alternative to colonoscopies. The U.S. Preventive Services Task Force (USPTF), the Blue Cross Blue Shield Association (BCBSA), and the Centers for Medicare and Medicaid Services (CMS) have all taken steps that boost the status of Cologuard as a standard of care. Most insurers now cover the DNA test.

You'd think that if Exact Sciences could get the word out to more physicians and patients, Cologuard sales would pick up even more momentum. And you'd probably be right. Exact Sciences agrees. That's why the company is beefing up its sales force considerably, growing its primary care sales team from around 250 representatives in 2017 to close to 350 this year, and doubling its inside sales staff.

Exact Sciences has also continued to air TV commercials promoting Cologuard. The company has partnered with the PGA Tour. Exact Sciences' new public awareness campaign featuring Harry Connick Jr. and Jill Connick has also received plenty of attention, even though some investors were hoping the company would land a bigger star.

However, Cologuard isn't the only focus for Exact Sciences. The company partnered with the Mayo Clinic to develop liquid biopsies for early detection of cancer. It's still early, but Exact Sciences could emerge as a significant player in what's projected to be a $13 billion market for liquid biopsies.

A four-letter word to remember

But there's a four-letter word investors should remember before betting the ranch on Exact Sciences. That word is risk.

I think there are at least two key risks Exact Sciences faces. One is that the stock's premium valuation puts intense pressure on the company to continually beat expectations. Exact Sciences stock fell in the first quarter of 2018 in large part because sales growth for Cologuard in the fourth quarter of 2017 was lower than anticipated.

There was a good reason Cologuard sales growth was a little low: It was an especially nasty flu season. As a result, many physicians pushed off wellness visits. Since doctors typically discuss colorectal cancer screening during those wellness visits, it only makes sense that Cologuard test volume was impacted somewhat. But with Exact Sciences still losing money and its market cap standing close to $6 billion, even good excuses for a disappointment aren't enough.

The other risk, though, is much more serious. Exact Sciences isn't the only company working to develop liquid biopsies. If a rival reaches the U.S. market first with a cost-effective blood test for colorectal cancer screening, it could mean big trouble for Cologuard.

Fears of this scenario increased earlier this year when Atul Sharan, the CEO of CellMax Life, a small company that markets a blood test for colon cancer screening in Taiwan, stated that U.S. studies of the blood test could begin this year. Sharan even claimed that the liquid biopsy could be sold in the U.S for around $150 if approved. That's well below the price for Cologuard.

Are those risks so great that investors should stay away from Exact Sciences? I don't think so. Balancing the potential for rewards against the risks is a never-ending struggle for investors.

The negative effects of the rough flu season on Cologuard sales probably carried over into the first quarter. We'll know for sure when Exact Sciences announces its first-quarter results on Thursday. If sales growth for Cologuard is disappointing again, it could present a great opportunity to buy the stock. On the other hand, if sales really picked up for Cologuard, it could signal a return to the high-flying days seen last year, when Exact Sciences' share price nearly quadrupled.

Either way, don't be greedy with Exact Sciences stock. The definition of greed is desiring something excessively. It's that adverb -- excessively -- that causes the problem. As great as the potential for Cologuard and Exact Sciences' experimental liquid biopsies are, there's always a risk that things won't work out like optimists (including me) think they will.