Big Red has been aggressively expanding into media assets in recent years and is now exploring over-the-top (OTT) options to mitigate cord-cutting. Verizon is not actively considering any new giant media deals, while rival AT&T continues to fight with the U.S. Department of Justice over its proposed acquisition of Time Warner.

Verizon finished the first quarter with 116.2 million retail wireless connections, maintaining its title as the largest domestic carrier. While that total increased year over year, Verizon still lost valuable phone customers. Verizon reported net adds of 260,000 retail postpaid connections, but that includes losing 24,000 phone connections and 75,000 tablet connections. Those subscriber losses were offset by adding 359,000 connected devices, which were mostly wearables. Cell plans for wearable devices do not generate nearly as much revenue as smartphone plans do. 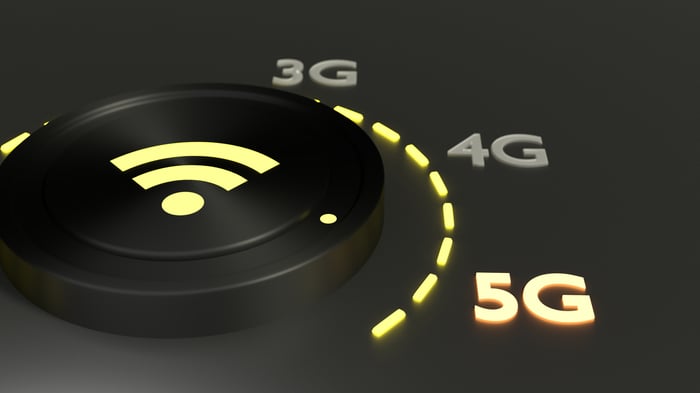 Additionally, here are some other details from the first quarter:

On the conference call, CFO Matt Ellis said Verizon is considering an OTT video service, but doesn't want to simply launch a copycat product: "We continue to look at OTT options, and as we've said previously, we're not looking to launch a 'me, too' product, but certainly expect to have an overall product offering to consumers in those three to five markets that will be compelling and meet their needs."

The Unlimited plans that were unveiled a year ago are helping to reduce churn. Ellis added, "Our Unlimited offerings continue to provide a compelling value and overall customer experience that has led to postpaid phone churn of 0.80% for the quarter. This represents the fourth consecutive quarter of customer retention at 0.80% or better."

At this point in time, as we look at the ecosystem, we're very comfortable with the approach of making sure we have distribution rights to digital content. You saw that with the NFL deal, the NBA deal, and I would expect to see us continue to add to that portfolio of digital rights to distribute across various Yahoo platforms, Oath platforms, as we go forward. So, look, the content space is evolving rapidly, and we think the best approach for us at this point in time is to be that independent distributor of rights out there, and we're very comfortable that we'll be very effective doing that.

Verizon's guidance for 2018 is largely unchanged from last quarter. The company still expects full-year revenue growth in the "low single-digit percentage rates" on a GAAP basis, and expects service revenue growth to turn positive by the end of the year. Adjusted EPS should be up in the low single-digit percentages as well. Capital expenditures are still forecast at $17 billion to $17.8 billion, which includes the costs associated with the commercial launch of 5G.

The company's effective tax rate for 2018 is expected to be in the range of 24% to 26% following tax reform.