The numbers for Facebook's (META -2.88%) first quarter are out -- and they're impressive. Revenue and earnings per share soared 49% and 63%, respectively, as advertisers bought up the social network's ad products in droves. In addition, Facebook's free cash flow for the period swelled to $5 billion, up from $3.8 billion in the year-ago quarter.

But Facebook's first-quarter earnings call gave investors further insight into the workings of the social network's business. Here are the top three quotes from the earnings call, including a look at Facebook CEO Mark Zuckerberg's thoughts on peer-to-peer payments, the role of artificial intelligence in moderating content, and Facebook's advertising business model. 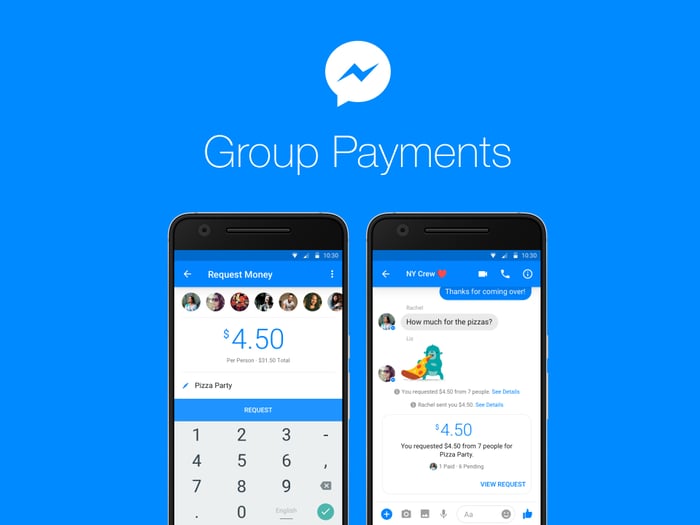 When asked to expand on how Facebook is thinking about payments within its messaging app, here's what CEO Mark Zuckerberg said:

I think that this is going to be a really big opportunity. And again, like I said earlier, the point here isn't to charge for payments; it's that messaging can be a more transactional medium than [the Facebook News] Feed.

As users get more comfortable with being more transactional on Messenger, this will ultimately "be very valuable for businesses," Zuckerberg said.

2. Using AI to be more proactive about moderating content

With all the negative press Facebook received regarding foreign influence over the presidential election and the company's recent mishandling of user data, Facebook has been under the microscope recently. One particular area of friction for Facebook has been its ability to detect and moderate hate speech, terrorist content, and other inappropriate content.

On AI, I think that there's a very big shift in how we're going to think about content moderation on the platform. ... Now it is becoming increasingly possible, both because we can build the AI tools, but couple that with being able to hire thousands and thousands of people to do faster review of the content and look of some of the things proactively -- we're shifting over the next few years to a much more proactive model of moderation.

Indeed, Zuckerberg said Facebook has already made meaningful progress on this front, particularly when it comes to terrorist content. "... I'm proud of ... our AI tools that help us take down ISIS and Al Qaeda-related terror content, with 99% of that content being removed before any person flags it to us," Zuckerberg said.

Given Facebook's recent negative attention surrounding user data and privacy, there's been speculation about the prospects of the social network eventually launching a paid, ad-free version of its service.

But Zuckerberg seems as committed as ever to Facebook's current business model.

We think that ads is a great business model that is aligned with our mission. ... Even when we do other things -- like we're running tests of Payments, we have Marketplace, which is growing and doing well -- there may be other ways that we could think about making money from those but in general, our strategy is to offer those services at cost and make it so that businesses can bid what it is worth to them to run ads in the system.

Investors, therefore, shouldn't get their hopes up for a paid version of Facebook -- or a paid version of any of its apps, for that matter. Of course, given the heady $5 billion of free cash flow Facebook was able to generate during its first quarter thanks to its fast-growing advertising revenue, investors likely wouldn't want the social network to change much about its business approach.