Surging profits from higher prices and comp sales, a new CEO changing the narrative, and a likely short squeeze are driving the burrito chain's stock much higher.

Shares of Chipotle Mexican Grill, Inc. (CMG -2.63%) are surging today, up 24.8% at 12:39 p.m. EDT. The big catalyst is yesterday afternoon's release of the company's first-quarter 2018 earnings report. The fast-casual chain reported revenue increased 7.4% to $1.1 billion, while earnings per share surged a very strong 33% to $2.13, easily Chipotle's second-best quarterly profit since 2015.

Chipotle's strong profit growth was only part of what has the market so excited about the company's stock today. Same-store sales -- also called comps -- were up 2.2% in the quarter, a sharp improvement from the past two quarters, which saw comps growth fall below 1%. Furthermore, the company said its underlying comps were actually up 2.7%, before a 50-basis-point impact from last year's "Chiptopia" promotion was factored out.

The comps acceleration, it should be noted, was driven by 4.9% higher prices versus the year-ago quarter. 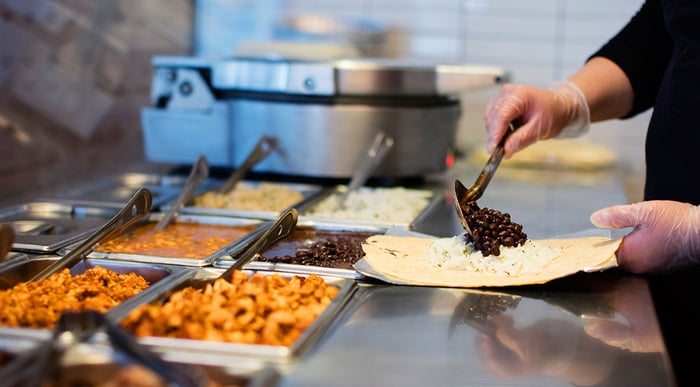 Prices helped the bottom line substantially -- restaurant-level operating margin surged to 19.5% from 17.7% and was a big reason profits increased 33%.

On the earnings call, new CEO Brian Niccol, whom the company lured away from his CEO gig at YUM Brands' Taco Bell, talked at length about his plans to further drive Chipotle's turnaround, and bring customers back in even greater numbers.

There's one other factor likely playing a role in today's price increase: short interest. Over the past year, Chipotle stock has been heavily shorted, with shares outstanding held short above 13% at last count. That's nearly 3.7 million Chipotle shares. 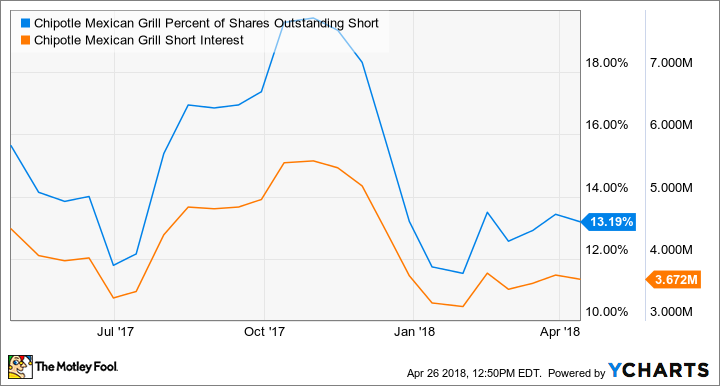 It's highly likely that at least a portion of today's big jump is related to short-sellers having to buy Chipotle stock to exit their short position.

Chipotle's big profit increase is a notable positive, and it seems that Niccol is working hard to change the narrative and refocus the burrito chain on growth. With a strong history of results at Taco Bell through creative food innovation (though it's unlikely we will see nacho fries at Chipotle anytime soon), it also seems that many investors are expecting similar success at Chipotle.

At the same time, investors should be cognizant that Chipotle continues to struggle with traffic. Underlying comps may have gone up 2.7%, the best result in three quarters, but a 4.9% price increase was wholly responsible, meaning the company once again had fewer paying customers than it did one year ago. For now, the market seems to be giving Niccol the benefit of the doubt -- or at least scared some short-sellers off -- but at some point, investors are going to start expecting to see more customers driving better results, not just higher prices.