Please ensure Javascript is enabled for purposes of website accessibility
Log In Help Join The Motley Fool
Free Article Join Over 1 Million Premium Members And Get More In-Depth Stock Guidance and Research
By Daniel B. Kline – Updated Apr 26, 2018 at 4:24PM

The e-commerce giant may want its new Echo version to wind up in children's rooms, but control will remain comfortably in the hands of parents.

While Amazon (AMZN 2.55%) does not share sales numbers for its devices, there's no question that its Echo family of Alexa-powered smart speakers is the segment leader. In fact, Echoes accounted for over two-thirds of the installed base of home automation devices as of the end of 2017, according to a survey from Consumer Intelligence Research Partners (CIRP).

CEO Jeff Bezos did reveal in October that his company had sold more than 20 million Echo devices, while CIRP pegged the number at 31 million at the end of last year. Whatever the current total is, Echo and the Alexa artificial intelligence (AI) behind it have slipped comfortably into a vast swath of American households.

When the Echo first hit the market, it was relatively expensive -- $200, though there were half-price deals for Prime members. The later introduction of the lower-end Echo Dot, which has sold for as little as $30, was an attempt to get us to install Alexa not just in living rooms and kitchens, but in every room in the house. And based on the sales figures, quite a few people were comfortable with that idea.

The company's latest smart speaker innovation, however, may be a bit more controversial: Amazon has released an Echo aimed squarely at kids. 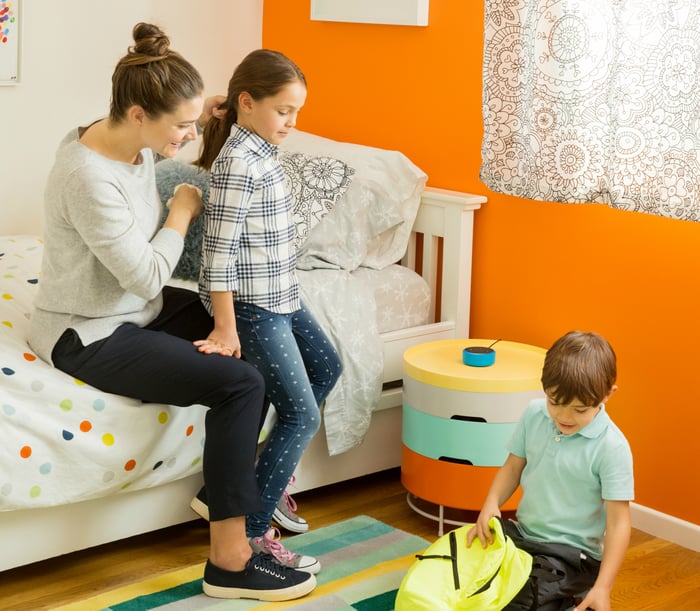 The Echo Dot Kids Edition features FreeTime on Alexa, a free set of parental controls that allows the adults of the house to filter out explicit songs, set usage limits, review activities, disable the voice purchasing function, and give the device a "bedtime." The system also offers an educational question-and-answer feature, and gives positive reinforcement to kids when they say "please" instead of just telling the AI what to do.

Further, the company is expanding its FreeTime Unlimited service, previously offered across the Kindle Fire platform, with a new version for Echo devices.  Unlimited offers access to over 300 Audible kids' books; kid-friendly, ad-free radio stations and playlists; character alarms; premium Alexa skills from Walt Disney, Nickelodeon, National Geographic; and more. It costs $2.99 a month for Prime members, and will roll out to Echo devices beginning on May 9.

Amazon will give a year of the service free to anyone who buys the $79.99 Echo Dot Kids Edition. (One other area where that device differs from the standard version -- it comes with a child-friendly case and a two-year "no questions asked" replacement guarantee.)

"Tens of millions of households already use Alexa, and today we're excited to introduce an entirely new way for kids to have fun and learn with Alexa," said Amazon Devices Vice President Dave Limp in a press release. "With Echo Dot Kids Edition and FreeTime on Alexa, parents can have peace of mind knowing their kids are getting age-appropriate content."

Clearly, there's a market for technology the comes with user-friendly parental controls. Many kids today have access to digital devices at very young ages, and voice-controlled smart systems add a new wrinkle for parents to deal with.

This particular offering parallels what the Amazon has done with its child-friendly version of the Kindle Fire tablet. In the case of the Echo, though, the company arguably has more to gain.

The online retail giant ultimately wants Echoes to serve as the central control hubs for our smart homes. And if the entire family is comfortable using the device, it's easier for parents to justify shelling out for smart lights, cameras, outlets, and other home automation products.

This is Amazon solving a problem for parents while also bringing a whole new generation into the fold of the Echo/Alexa family. That's likely to pay off for the company in years to come as it further cements its lead in the smart speaker category.

John Mackey, CEO of Whole Foods Market, an Amazon subsidiary, is a member of The Motley Fool's board of directors. Daniel B. Kline has no position in any of the stocks mentioned. The Motley Fool owns shares of and recommends Amazon and Walt Disney. The Motley Fool has a disclosure policy.