The tech giant wants Alexa to start following you around.

Amazon will reportedly start testing the robots in some employees' homes later this year, followed by a possible consumer launch in 2019. It's unclear exactly what Vesta will do, but Bloomberg's sources speculate that it could autonomously navigate around homes while providing Alexa services.

In other words, Amazon's Vesta could resemble Asus' (ASUUY 9.97%) Zenbo home robot, a $600 device which it launched in Taiwan almost two years ago. That Android-powered robot, which TechCrunch describes as a "real-world version of BB-8," can control smart home devices, respond to voice queries, take pictures, and act as a home security system.

The FCC approved the Zenbo for the US market last year, but Asus still hasn't launched the Zenbo stateside. Asus likely delayed the launch to focus on the problems plaguing its core PC and mobile businesses.

Asus' worldwide PC shipments tumbled nearly 11% in 2017 according to IDC as its bigger rivals, HP, Dell, and Apple, advanced. In the smartphone market, Asus' ZenFones are struggling to counter cheaper Android devices from Chinese rivals like Huawei, Xiaomi, Oppo, and Vivo.

That's why Asus' revenue slid 7% last year, and why analysts anticipate another 4% drop this year. Therefore it probably isn't ideal for Asus to heavily promote side bets like Zenbo yet.

If Asus had boldly marketed the Zenbo it might have attracted more developers to the platform to expand its skills. That's precisely what Amazon did with the Echo.

Amazon's Echo speakers control over half the U.S. smart speaker market according to a Loup Ventures survey in February, while Alexa-enabled devices expand that ecosystem beyond first-party hardware.

That growth attracted an army of developers, who helped Alexa learn over 25,000 skills by the end of 2017. Those skills include the ability to check financial accounts, control kitchen appliances, provide guided workouts, hail rides, and play voice-controlled games. 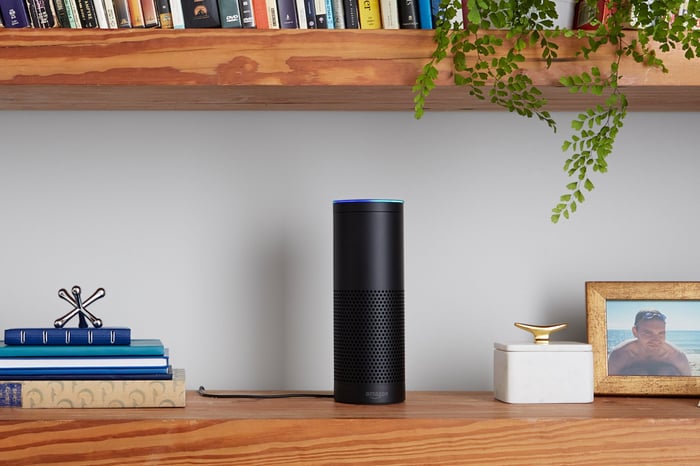 Amazon recently revealed that it had over 100 million Prime members across the world. Earlier this year, research firm CIRP claimed that the average Echo owner in the U.S. spent $1,700 annually on Amazon, compared to $1,300 for regular Prime members. Therefore the growth of the Alexa ecosystem directly supports the growth of Amazon's online marketplace.

That's why Amazon expanded the Echo lineup with the smaller Echo Tap and Dot, the screen-equipped Echo Look and Show, and the second-generation Echo Plus, which doubles as a smart home hub. That's also why it integrated Alexa into its Fire TV and tablet devices.

That expanding ecosystem gives Amazon a sturdier foundation for launching an Alexa-powered home robot than Asus, which introduced an interesting product but failed to support it with adequate marketing or enough developers.

The Zenbo's $600 price tag was also too high for a device marketed as a companion robot for kids and seniors. Amazon, however, often sells its hardware at break-even or negative margins, then recoups those losses with digital or retail revenues. Therefore Amazon could launch its Vesta home robot at a much lower price than the Zenbo or other comparable products.

Could the Vesta launch a new market?

Amazon's success with the Echo, which caused other companies to launch their own smart speakers, shows that it can create new markets. If it takes a similar approach with the "Vesta" -- named after the Roman goddess of the hearth, home, and family -- it could launch a new market and send its rivals scrambling to develop their own home robots.